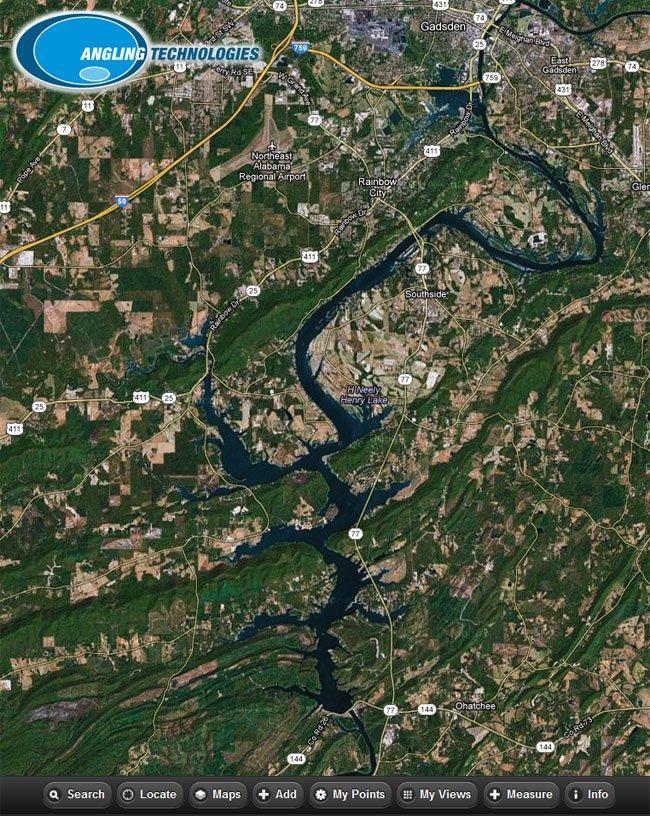 Many anglers call Alabama the first home and several of us that have never lived their but have fished its many great fisheries call it our second home. There are a few states in the union that offer such a diverse variety of fisheries and high quality fishing for multiple species of bass and other game fish. Alabama, Arkansas, Georgia and Minnesota to name a few hold very special places in our heart because they offer great largemouth, smallmouth, spotted bass and other game fish fishing in many diverse fisheries.

Last year we got to experience a couple of new Alabama fisheries for the first time and since have learned a great deal about them from fishing and other great anglers that have been fishing them most of their lives. We’ll highlight several Alabama fisheries in Visit Fish but we’re going to start with one that is not likely a top pick for a lot of anglers, but it might be after delving into what makes it such a unique fishery.

The fishery is roughly 77 miles long with 332 miles of shoreline (a key number as we’ll later see) but it’s only 11,900 acres. Which means it’s a very long, windy and narrow fishery relatively speaking with some windy creeks stemming from the inundation of the river and surrounding hollows.

Fast forward to today and fishermen have a truly unique angling gem. The star of this show is definitely the native Coosa River spots, a breed of spotted or Kentucky bass that some call the meanest bass that swim natively in North America. There are plenty of big largemouths in the lake as well but the Coosa’s are the unique breed that out-of-towners are usually seeking to catch.

“It’s really a fun lake to fish,” said professional angler and long-time Alabama guide Jimmy Mason of Florence, Ala. “It’s the lake I don’t get to fish as some of the others, but I love to come over here and fish because it’s like a throwback to how fishing used to be before we all had these technically advanced fish finders and big boats. You can honestly just drive the lake and pull in and fish what looks right.”

Mason isn’t exaggerating. He won a tournament a couple of years ago with 24 pounds and was catching 25 keepers a day during practice and en route to his win. He’s caught 5 &frac12;-pound Coosa spotted bass on buzzbaits and largemouth weighing 7 pounds. And 8 pound largemouths are not unheard of although a 6-pound bass will usually get you big bass in most tournaments.

What is unique about the fishery is not its size or shape, but rather how it fishes.

“You can literally fish shallow 12 months out of the year here,” Mason said. “Obviously it can get harder in the winter and summer but I’ve had some amazing Coosa spot fishing in January and February fishing current related places in relatively shallow water.  I will sometimes idle around looking for fish out deep, but most of the time I just hop around until I find those active shallow fish.” 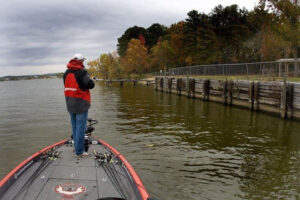 The lake offers three key ingredients to good shallow fishing on any lake or river â€“ docks, water willows and other shallow vegetation and current. What makes the fishing so good is not just the presence of all three but the fact that all three show up in a wide variety of situations and thus you can run different patterns on seemingly like stuff.

For example, in the spring the bass might be relating to the shallower docks in the flatter pockets and creeks off the main river. In the winter, the Coosa’s might be relating to current breaks and eddies off main river obstructions. In the fall you might be able to run seawalls with topwaters and buzzbaits and catch a mix of nice bass. There is where the fun lies for anglers.

“I’ve been fishing it since I was old enough to hold a pole,” said Dustin King, a life-long resident of the fishery, having lived most of his life in the major Canoe Creek arm of the lake. “I’ve had some amazing days on the lake. Even in the heat of the summer, I’ve caught big bass weighing more than 7 pounds fishing stuff I hit a lot. It’s a lake where you might fish a spot all morning without a bite and then they kick the current on and you have one of the best days you’ve ever had.”

Both anglers employ a variety of tactics throughout the year as is the case on any fishery. But a few common themes we found on the lake were crankbaits, jigs, plastics and topwaters.

When the fish are relating to current on the main part of the river, a crankbait can be hard to beat.

“This time of year a Bomber Flat A can be really hard to beat,” Mason said. “I get one custom painted in a pumpkinseed pattern that is just a killer on the lake. But you can figure out the type of banks, cover or eddies the fish are relating to and just run the whole lake looking for similar stuff. It’s such a patternable lake.”

Square billed crankbaits were the hot ticket when we were there this past fall. Fishing them along rip rap, current breaks, seawalls and even main lake docks yielded some nice Coosa spots and largemouths as well. They can also be real good in the early prespawn all the way up to the spawn also.

In the colder months, finding Coosa’s relating to current and gently letting a finesse jig like a Booyah Boo Bug tumble with the current into the eddy often yields big Coosa spotted bass for Mason.  The other time he likes to catch big Coosa’s is in the fall with a buzzbait or topwater.

“There is nothing like the way a Coosa spotted bass savagely attacks a topwater plug,” Mason said.

This past summer, King was asked to take a magazine crew out fish in the doldrums of August fishing. The crew literally couldn’t find a guide to take them out because fishing had been so miserable. So King took the crew to a few of his favorite crankbait holes, and as luck would have it, the current kicked on and they whacked the bass with a Jackall Muscle Deep 15+ crankbait. In fact King caught his personal best on the lake, a bass nearly touching 8-pounds on the scale in the blazing summer heat.

Two of Mason’s favorite patterns for bass on the lake is flipping boat docks, which he said can be dynamite year round and is just a matter of figuring out what type of docks the fish happen to relate to. You have docks that hang out over deep water in the main river and you have docks that are in the skinny mud flats in the backs of the bays. He loves to flip a green pumpkin Yum F2 tube or his Booyah Boo Bug around the docks.

His other favorite pattern, and something we plan to come back to Neely to do this spring is swimming a jig around water willows or “Coosa grass” as the locals like to call it. The lake sets up perfect for some arm breaking bass fishing with a swimming jig.

Gadsden is a great place to find hotels, restaurants around the lake that are fisherman and boat friendly. If you want to plan a trip to Neely Henry, we suggest you check out Alabama Mountain Lakes Tourist Association at NorthAlabama.org. They are a travel and tourism group that really caters to anglers and the assets they have in the way of bass fisheries in North Alabama. They can get you hooked up with some out of the way places to stay, good places to eat along the river and more. 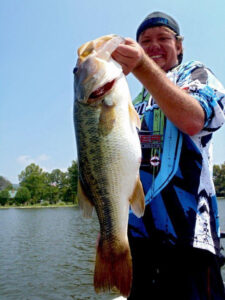