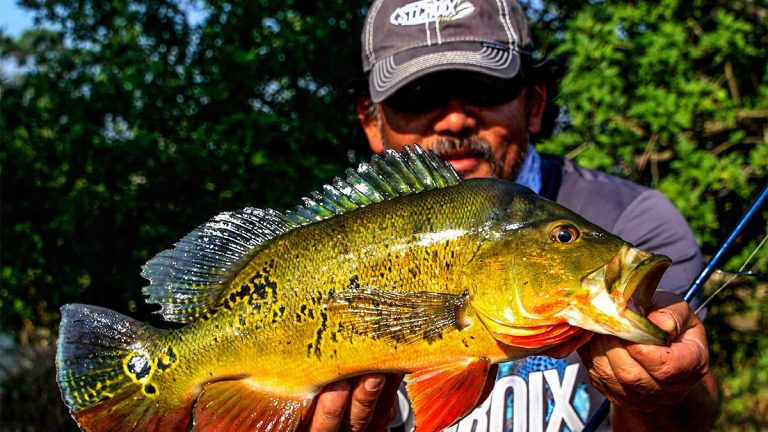 Who said you have to visit exotic lands to catch exotic fish? Nothing wrong with international travel, of course, but South Florida offers an amazing tapestry of opportunity in which several tropical transplants have established a domestic sport-fishing opportunity unique to this region.

Technically, we’re talking mostly about unwelcome invasive species, although the show-stopper was actually an invited guest that planted roots in the Sunshine State’s lower quarter. More on that in a moment, but first, let’s look at who’s in the house and how they arrived.

Hardy aquarium fish that are highly adaptable survivors and prolific breeders make up the majority of the biomass. Leading the list are the colorful and super aggressive Mayan cichlids. Others include several tilapia species (including Midas, blue, spotted, green, Mozambique), jaguar guapote and Oscars. Add to this a few oddballs, like clown knifefish, bullseye snakeheads (Asian origin) and sailfin catfish and you have an impressive menagerie of charismatic species roaming South Florida’s interconnected flood control canal network, along with local lakes and ponds.

Considered invasives, these out-of-towners entered the South Florida ecosystem mostly through illegal dumping by aquarium owners who lost interest and released their fish into the nearest canal. The fish reproduce faster than rabbits and before long, they established breeding populations that expanded throughout the region.

The downside is that these exotic transplants never lose the ferocity necessary for survival in their often perilous homelands. This negatively impacts indigenous species like bluegill and largemouth bass through competition for feeding and nesting areas.

The upside, however, is an absolute gold mine of angling opportunity, much of which can be done on foot. Fisheries Biologist Kelly Gestring, who specializes in non-native species for Florida’s Fish and Wildlife Conservation Commission said the agency strongly encourages anglers to catch and keep as many of these exotic invasives as possible.

“Nonnative fish are an available resource that increase angler opportunities; you never know what you might catch and most of them are pretty good eating,” Gestring said. “Several species of nonnative fish are very popular among anglers wanting a fish dinner including Oscar, Mayan cichlid, and spotted tilapia. Anglers concerned about eating nonnative fish are encouraged to visit the Florida Department of Health’s Fish Consumption Advisory site for more information.”

As Gestring notes, there are no size or bag limits on most of South Florida’s exotic species, with the exception of grass carp (catch and release only) and that show-stopper – butterfly peacock bass (two fish, only one of which may be over 17 inches in total length). The state introduced the latter in the early 1980’s as a biological control agent to help native largemouth stem the tide of invasive expansion.

Even the ultra-aggressive peacocks have a hard time eating enough of the invaders to make a dent, but their presence has added a tremendously popular sport fishing element with what Gestring termed “a substantial socioeconomic benefit to this area.” Crushing strikes, powerful runs and shoreline accessibility make these colorful beasts popular with anglers, while their daytime activity complements the largemouth’s morning/evening preferences. 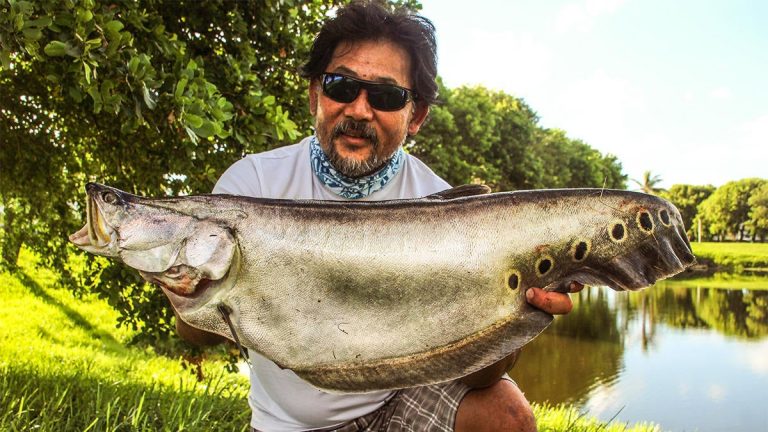 South Florida’s network of criss crossing waterways means exotic species are available just about anywhere you can safely and legally park your car. Experienced anglers know that the best action often requires trekking through “jungle” habitat or hiking long distances along canal edges to find the sweet spots; but notwithstanding the logic of locating unpressured waters, you’d be surprised how often you can walk right up to a canal and find some level of opportunity.

Google Earth will help you locate promising areas, so look for intersecting waterways or overflow areas where regular water movement keeps the place flushed with food and oxygen. Culverts are always attractive, as are bridges, rocky points and docks/piers. Sandy edges are usually less productive than those with exposed limestone.

How to catch ’em 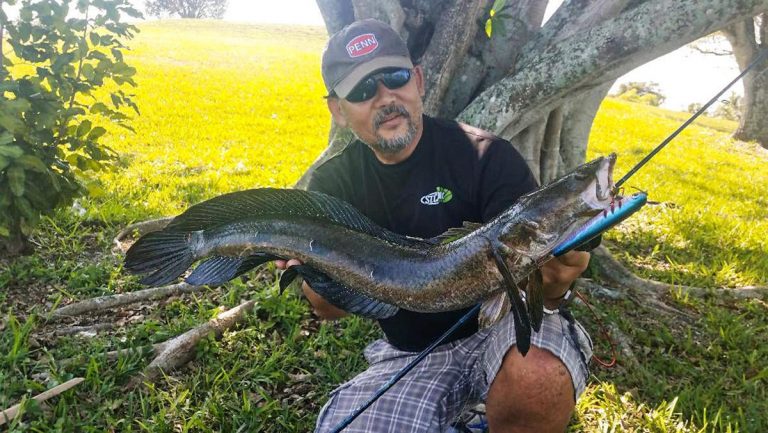 Peacocks are actually cichlids, not bass, so forget those plastic worms and creature baits. These fish like slash baits, lipless crankbaits, shallow runners like a Bomber Long A and bold, noisy topwaters. If you see a peacock following your bait, pick up the pace. These fish respond to the chase and simply cannot reel a bait away from them once they commit.

Snakeheads, which can reach a yardstick or longer, will attack anything that slithers or scampers across the aquatic vegetation in which they hide. That could be an unweighed Texas-rigged worm, but your best bet is a hollow body frog.

South Florida angler Alberto Knie often targets peacocks, snakeheads and clown knifefish, as opportunities arise. For optimal response, he ties his leader to a Tactical Anglers MicroPowerClip, which enables him to quickly switch from a slash bait, to a frog, to a live bait hook when presenting shiners to clowns.

For cichlids, live earthworms can be deadly, especially when they’re bedding. My favorite technique: thread the worm onto a No. 8 Aberdeen hook with a little wiggle length overhanging the point, crimp a split shot right above the knot and fish it like a miniature shaky head. With dragging, hopping or dead sticking presentations, those cichlids – particularly the ever-hyped Mayans – cannot stand this look.

You’ll also do well with a 1/16- to 1/8-ounce jigs with curly tails or shad tails, which are easily cast or pitched/flipped to visible targets. Also, tiny crankbaits, jerkbaits, spinnerbaits and even crappie-sized swim jigs and bladed jigs will bring out the beast in a cichlid.

Be aware that this is close range fishing, so that can mean proximity to South Florida wildlife. Rare is the day when you do not see at least a dozen aligators and given the canals’ generally steep sides, you’ll want to take a cautious peak before suddenly breaching the blind edge. To put it mildly, ‘gators don’t play well with others and surprising a sun-bathing swamp dragon won’t end well.

Other potential hazards include water moccasins, rattlesnakes (mostly in the upland areas) and the notorious fire ants. Watch where you step, especially during the rainy season, which displaces and concentrates these biting machines.