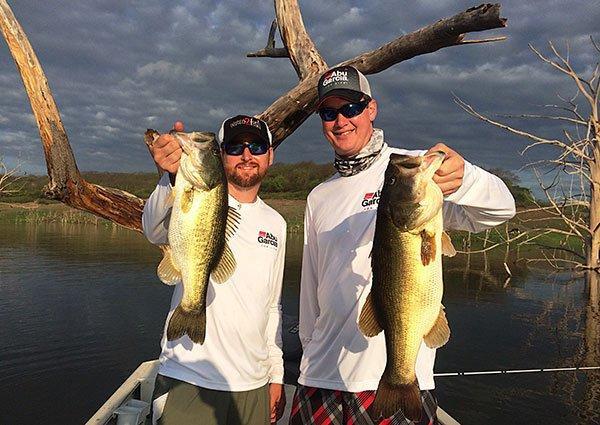 If you’ve always dreamed of catching numbers of giant largemouth bass, you need to plan a trip to fish Lake El Salto in Sinaloa, Mexico. Although it’s a bit off the beaten path, you’ll return home with lifetime memories and most importantlyâ€”raw palms, bruised ribs and a permanent smile.

I was finally able to experience this world renowned fishery for myself this past week as I was invited to test out some awesome new Abu Garcia gear at Anglers Inn. I’ve always heard stories of El Salto’s double-digit bass and its incredible numbers of 4 and 5-pounders, but I never expected anything like I experienced.

If you’re a hardcore angler, don’t sell yourself shortâ€”you have to make this trip at least once in your lifetime. Here are 6 reasons you need to pack your bags head south of the border.

Doubles are a common occurrence on Lake El Salto. Here’s one of many Paul Davis of Abu Garcia and I caught. Mine is bigger, his arms are just longer!

I was absolutely astounded by both the quantity and quality Lake El Salto had to offer. Whether you like fishing crankbaits, soft plastics, jigs or topwaters, you’ll be grinning like a mule eating briars for the entirety of your trip.

The lake is very low in the summer months but that didn’t seem to hurt the bass fishing action during our tripâ€”in fact, it actually made it better. Hundreds upon hundreds of bass were congregated on deep structure and the results were almost stupid.

We started most mornings targeting shallow flats with topwater lures and that seemed to be when the true giants were the most vulnerable. Within the first hour of daylight each morning, I had at least one bass over 8 pounds take a swing at my walking topwater lure. They weren’t normal blowups, either; it looked like somebody was throwing baby elephants on top of my lure. Amazing is an understatement.

As the sun lifted over the dramatic mountain landscape, the bass would position in deeper water in the 15 to 20-foot range and we pounded on ’em with deep crankbaits and big worms. There may be one small stump on the end of a point that would literally hold hundreds of bass ranging anywhere from 2 pounds to 10 pounds. It was easy fishing, tooâ€”if the fish were there, you’d get bit on your very first cast and you could expect non-stop action for the next hour. Your ribs will be black and blue, but if you’re like me, you won’t mind a bit.

My group was full of experienced anglers but I’m convinced a beginner angler could enjoy just as much success as we did. To be honest, presentation and technique seemed to take a backseat. If it wiggled or wobbled, the bass would inhale it. It sounds crazy, but that’s no exaggeration.

We stayed at Anglers Inn, an full-service resort founded by Billy Chapman Jr. and I can honestly say I have neverâ€”and I mean neverâ€”been treated so well in my entire life. Every single staff member has a genuine smile glued to their face all day and I was treated like a king. 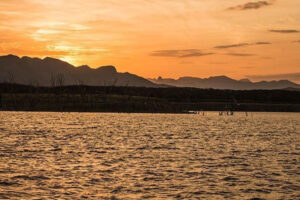 I found myself constantly in awe at the dramatic landscape that surrounds Lake El Salto. There isn’t an “ugly” part of the lake, eitherâ€”it’s all beautiful. You won’t find any docks, houses, road noise or barking dogs whatsoever. It was so quiet that my ears actually rang every day while fishing.

The lake is surrounded by enormous mountains, private farms and species of wildlife I never knew existed. Each morning and evening seemed to be somewhat of a revival for my soul as I watched the orange sun hover above the mountaintops. I’ll always remember the peace I felt during those times and I think the above photo speaks for itself.

This lake is chock-full of trees. Imagine the gnarliest lake you’ve ever fished, multiply it by 100 and you’ll have an idea of Lake El Salto. I’d be willing to bet you could make a cast anywhere in the lake and not be any further than five feet from a tree. It’s crazy!

We all got our baits and lures hungâ€”a lot. But after a day or so of practice, I had a great feel for the lake and the techniques needed to optimize my chances of success. It doesn’t take an expert because the guides are there to coach you through each cast.

I actually lost my personal best bass on this trip and learned a very valuable lesson in the process. I flipped a 10-inch Berkley Power Worm to a tree in 15 feet of water and when I tried to pull it up after hitting the bottom, it didn’t budge. After keeping the line tight for a few seconds, I felt a very small “tick” and it started to load my rod. I reeled down and set the hook as hard as I could and the wrestling match began.

I’d pull the bass about two feet, then she’d pull me three feet. I was on the losing end of a really twisted tug-of-war game. The entire 30-foot tree was shaking and after what felt like an eternity, I finally wrenched her halfway to the boat and all the movement stopped. I figured she was wrapped up, so I did what you’re not supposed to do when fishing deep timberâ€”I pulled even harder. My line popped like a gunshot and Juan, my guide, saw her flash color as she escaped. As much as it pains me to say this, he believes she was well over 11 pounds. Ouch.

The guides are excellent

I guide fishing trips on my home lake, so I’m not exactly used to being on the receiving end of a guide trip. It took me a few hours to get used to, but I’m going to be spoiled from now on. The guide staff at Anglers Inn was first-class in every way imaginable.

As I mentioned, you’re going to get snagged a lot when you fish Lake El Salto. But these guides can get any lure unhung from anything. They’ll work 10 minutes trying to retrieve a three dollar lure from a 20-foot tree and get it back without even batting an eyeâ€”just a smile and a wink.

I didn’t tie a single fishing knot throughout my entire trip. I didn’t like it at first because I’m a control freak but I figured these dudes knew a thing or two about strong knots on this giant bass factory. They checked my line every few casts, changed my hooks, retied my lures and offered to unhook every single bass I caught. I was simply blown away. Each morning they would have all of my rods pre-rigged with everything they expected to use. It was like a little “fishing fairy” visited every night and did all the work most of us despise.

I was also very impressed by how well the guides spoke English. Some were better than others, but it was very easy to communicate tips, techniques and thoughts back and forth. They were all hilarious, too, which really lightened the mood when I lost a big fish or got my crankbait hung for the 200th time. 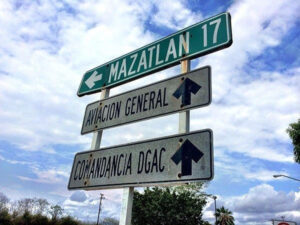 I’ll be the first to admit that I’m not an incredibly “cultured” guy. I’ve lived in Georgia my entire life, I’ll die in Georgia and I’ve never been out of the country for any reason. So it goes without saying I was a little nervous before going on this trip.

I don’t like being mad, so I don’t watch the news much. But I’ve always heard about drug cartels and all sorts of riffraff going on below the border. I went from being super excited about the trip to just hoping I’d make it back in one piece.

Take it from meâ€”you’ll be extremely safe if you decide to fish Lake El Salto. You’re not going to get pulled over by the cops, strip searched or anything like that. There wasn’t a single instance in which I felt like my personal safety was a concern. The folks at the Mazatlan airport were very helpful and courteous to this Spanglish-speaking Georgia boy and everyone I came into contact with was nothing short of wonderfully pleasant.

We’re only on this earth for a finite time and I believe we should all splurge and take a few “special” trips at some point in time. If you love bass fishing, you have to visit Anglers Inn on Lake El Salto in Sinaloa, Mexico. Not only was it adventurous and exciting, but the fishing and staff was truly world-class. If any of the Anglers Inn staff is reading thisâ€”thank you, from the bottom of my heart. I had such an awesome time! I can’t wait to bring my dad on a father-son trip there one day.