“Let’s go!” our guide said with sense of urgency. “We’ve got a 30-minute run to where the fish are.” Some folks might get offended at 6 am by a guide asking them to hurry. Not us. We love going fishing with folks with a sense of urgency like that because that tells us a) they want to squeeze every minute out of a day for fishing and b) they are probably dialed in on a specific pattern, area or school of fish.

As luck would have it, our guide was all of the above and a pretty funny guy to boot for a day of fishing on Lake Norfork. Long time and well-published outdoor writer Matt Straw and Northland Tackle’s VP of Marketing Eric Naig shared a boat with me and our captain, Thomas Reynolds of STR Outfitters, a long-time angler and guide on the beautiful Ozark Mountains impoundment Norfork Lake.

It’s been 10 years since I was on Lake Norfork, and I had forgotten how beautiful the scenery was in this part of the state. I’m not sure if that’s because of the remoteness of the lake as no major interstates come anywhere near this part of the lake. Or maybe it’s because the lake is literally flooded limestone mountains with very little development on the water.

So when you make a short run up the river arms, you feel totally alone on the lake, something we miss sometimes on fisheries on the Tennessee River. And I love to go to other places and fish a totally different way for different species for a change when I can. There is something refreshing about chasing another species in a foreign manner that sort of reboots your thought process for fishing on your own waters.

We started setting lines after a very brisk run up the river. I was testing a new Frabill FXE StormSuit and was very glad to have the extra layer in the morning. But the ride up the lake was beautiful and calming. We just cruised along enjoying the scenery and anticipating sore shoulders from fighting big stripers.

When we hit our first spot, the three of us offered to help, but our guide was hopping around the boat dropping lines, setting Water Bugz planar boards, drifting Redi-Rig bobbers and snagging bait out of the well. We eased along the river channel and edges of a flat as he got all the lines set.

The bait of choice were gizzard shad that he had spent three hours netting the night before with a casting net. As we talked about the lake, one of his 10-foot B&M Heavy Trolling Crappie rods bowed into the water to about the sixth eyelet.

“Get it! Get it! Get it!” our guide yelled pointing at the downed rod. Straw grabbed the rod and swept back on the first fish of the day. Reynolds uses 10-pound Cajun red line and is convinced it works wonders for striper fishing. But more unique was his combination of Abu Garcia Ambassador reels and 10-foot trolling crappie rods. It was amazing how well you could handle a 10- to 15-pound striper. And you really have to play the fish down and fight them on that tackle. That made the experience that much more fun.

We were picking up one here and one there pretty steady, until our Captain saw something on his Lowrance unit.

“Get ready,” he said. “I think we’re in a big school of them now. Man I can’t believe how shallow they are. We should get bit here.” About that time the drag started clicking and we turned to see one rod buried in the water bounding up and down in the rod holder. Then the one across from it on the stern went down. Then another rod up by the Captain went down. Then we had one of the planar boards tangled from two fish fighting on one side. 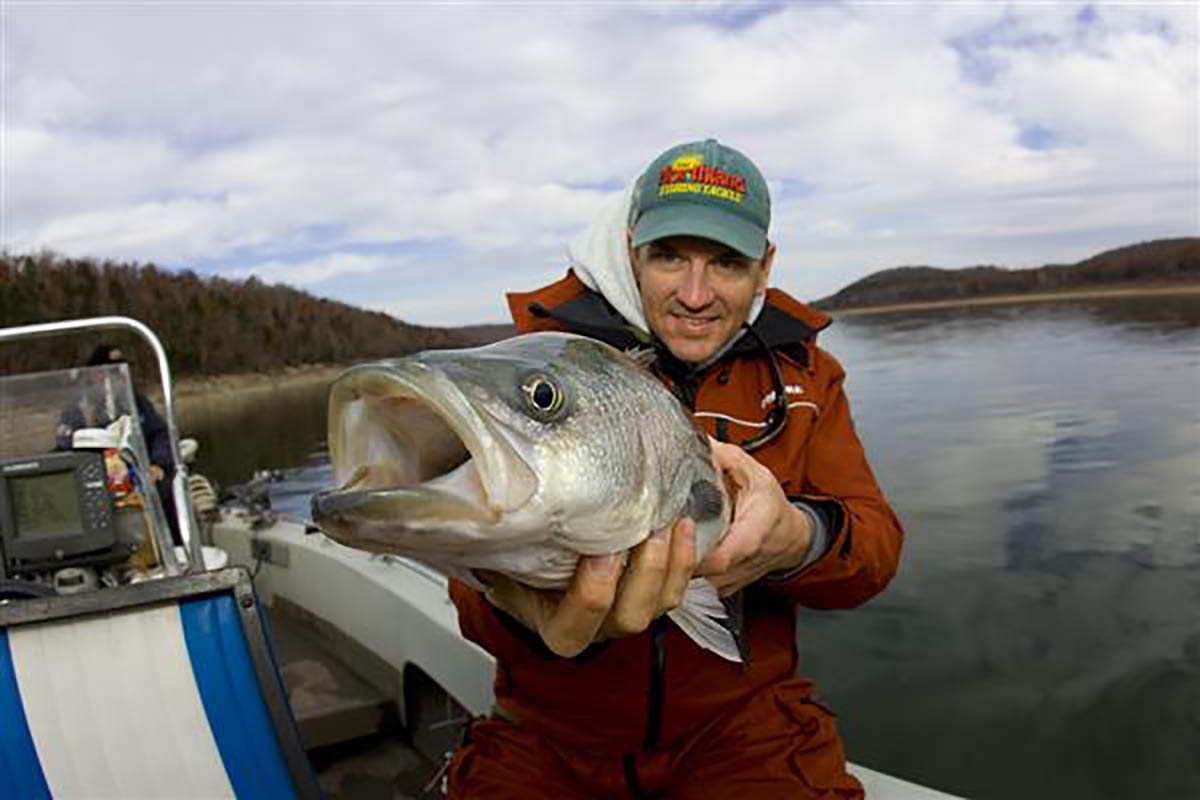 It was a fine example of organized chaos at its best, and we were laughing and carrying on while fighting some strong Norfork stripers. We shot photos and video of our fish catches during the day, and we were going through Reynolds bait supply rapidly. In the lull periods an eagle would fly over or we’d see a buck up on the ridge chasing a small doe. We only saw two other boats that whole morning, something I really enjoyed about the day on the water.

Back at the dock, everyone was buzzing about the catch — 14 stripers, 2 hybrids and several fish we lost or missed. Our guide was on the fish all day, the comradery was great and the fishing was well worth the winding roads to get there.

It’s always fun to catch fish, and it’s fun to catch different fish in new ways. I lived in Arkansas for 10 years and probably took some of the great scenery and fishing they have for granted. Our accommodations have been awesome at Gastons and Blue Lady Resorts. There is so much opportunity for fishing here with the trout on the White River; largemouth, smallmouth and walleye on Bull Shoals; stripers, panfish and bass on Norfork Lake; smallmouth bass on Crooked Creek and the Buffalo River and a lot more not far away from this part of the state.

We’ve had a lot of fun fishing in Arkansas and will definitely come back for some more in other parts of the state.

For accommodations check out Gastons and Blue Lady Resort. 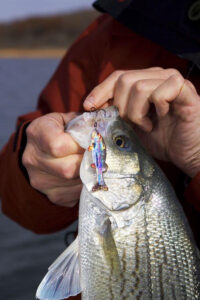