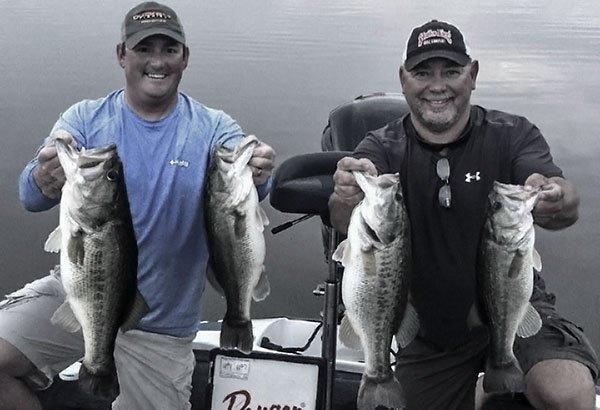 Paris for many people conjures up thoughts of art, wine and fine dining with back drops of the Eiffel Tower and berets slightly askew. But in the mid-south, Paris is synonymous with world-famous bass fishery, Kentucky Lake. Paris, Tenn. is centrally located on the famous impoundment that spans from Western Kentucky to Southwestern Tennessee.

In fact, the lake is so large, we’re only going to focus on the central to southern section of the lake that falls in Tennessee because we believe fishing each end of the lake can be a lot different from the other.

We spend several days a year in the southern section of Kentucky Lake, and most recently I was over at Paris at the Fishtale Lodge for the Strike King Press Event. It’s a chance for a lot of great professional anglers, lure and tackle manufacturers and press writers, photographers and videographers to get together and see what’s new from Strike King and test some new product and talk technique with some of the best anglers in bass fishing.

But I took a little time this trip to learn more about the area because, quite frankly, I get hundreds of inquiries a year about fishing on the lake and I was tired of telling folks, I really didn’t know about “the other end” of the lake. Being that I’m resident of the Kentucky end of the lake, I didn’t know much about food and lodging because I generally don’t have to stay in a hotel around the lake

Paris is the center of the lake for travelers

Paris is located in Henry County, and if you’re wanting to fish Kentucky Lake, it’s a great option to consider. Probably the biggest thing that sticks out to me about the Paris area is that the whole area really loves and caters to anglers. I travel all the time, and short of Alabama, many communities don’t embrace the draw that their lakes have to tourism.

The Henry County Alliance definitely sees the importance of the lake and more importantly anglers to the area. “Kentucky Lake is a huge draw for us,” said David Hamilton, CEO of the HCA. “The resorts, restaurants and community understand how important anglers are to this area.”

The nice thing about Paris is all the businesses cater to anglers. Gas stations, lodges, restaurants and more are all fishermen friendly. You can stay close to the water or a little closer to town. You can dine in town or on the water. You can bring a whole club to the lake, stay in a resort, eat at the resort and launch and weigh-in at the resort. It’s that convenient for all anglers.

The fishing is what will bring folks to the lake but there is shopping, the land between the lakes, a Bison and Elk range not too far up the lake, golf, craft fairs, antique shops, book stores, coffee shops and more close by. 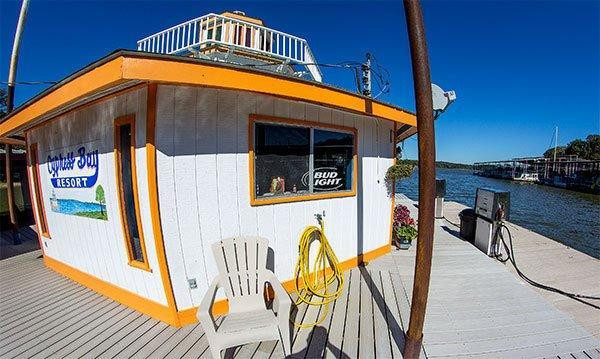 Lodging and eats around the lake

We often stay at the Fishtale Lodge. It’s just a couple miles from the Paris Marina where most folks will launch. It has great parking where you don’t even have to unhook, clean rooms and is ready for boats to be parked and plugged up overnight to charge. The owner is awesome and loves anglers.

If you want to stay on the water with a group of friends or family, you might take a look at Cypress Bay Resort. It has several cabins, a boat dock, bait, tackle and refreshments at good rates in Cypress Creek just north of the Paris bridge.  Shelly and Glenda Jones own the resort now. Shelly’s father used to own the dock in Pisgah Bay back in the 60s before Land Between the Lakes ran everyone off the lake on the east side. So they came down looking for resorts on the south end of the lake away from LBL, and they liked the location in the back of a Cypress.

Jones worked weekends at the resort while attending Murray State and took over the business in 1979.  They have 9 units and 175 boat slips that they rent or reserve for guests . Each unit can hold 6 fishermen comfortably. When Jones father bought the resort, there were probably 25 resorts on the lake in the area. Now there are only 4-5 resorts. This is truly a unique historical way to experience Kentucky Lake.

Buchanan Resort has a ramp, boat slips, a lodge, cabins and even a restaurant for travelers. A lot of small clubs will hold tournaments here because it’s a one stop shop for travelers.

As far as good eats around the lake, we are pretty fond of Meo Mios Cajun Restaurant. It’s right next door to Fishtale Lodge up on the hill. It has a lot of fish, shrimp, po boys and such as well steaks, chicken and salads and nice bar atmosphere.

The Paris State Park has a hotel and a pretty good restaurant as well.

If you’re wanting to undwind a little more after a day of fishing and listen to some live music, you can try The Breakers or Eagles Nest on the lake. Pirates Cove in Leatherwood and Fat Daddy’s also have good food and good atmosphere on the lake. 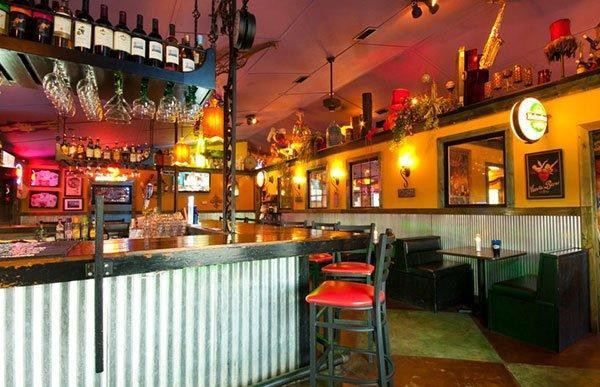 The draw will always be the lake. New Johnsonville, Paris, Cypress,  all have their times where they produce. But for the most part the whole area fishes well with certain patterns and types of lures at certain times of the year. So we found one local expert to shed some light on what to throw and where and when for bass fishing on Kentucky Lake.

I talked with Sam Lashlee about fishing on the south end of the lake. Lashlee is an accomplished angler on the lake, having won numerous tournaments, guiding and serving as coordinator and host for various events. He’s very familiar with the resorts and such in the area, but he’s much more well known for his knowledge of the lake. Here is a little of what he had to say about fishing the south end of Kentucky Lake throughout the year.

“I key on shad as the bass are suspending under and around the bait this time of year,” Lashlee said. “You can catch them on Alabama Rigs and swimbaits or jerkbaits.  But if the bass get on the bank, I will pull out the Series 3 or Series 5 and go after fish in the mouths of the bays or maybe on main river ledges.

“During the Prespawn time frame, I find some big schools on the main river, suspending off deep breaks. It’s a fun time to catch big fish. The A-rig really opened my eyes up to the fact that big bass stay on that main river all year, they just aren’t always on the bottom.”

“This is one of the few times I go to the banks to fish. But I will also fish the bottom out on main river ledges too. I’ve seen fish spawn on the main lake in the current breaks, eddies and backwater areas that are shallow and flat out in the middle of the lake, behind islands and such.

“I like a red eye shad or spinnerbait early or on  windy days but I won’t hesitate to pick up that topwater when the water temps get above 55 degrees. Especially if I think fish are bedding or cruising about to bed. I catch great big fish on topwaters when others might think it’s too cold for it. That Strike King Sexy Dawg really catches big ones this time of year.”

“One of my favorite times of the year. This lake is known for ledge fishing and these two months can be the prime big deep diving crankbait time on the lake. I will generally have nothing but a 5XD, 6XD and a 10XD on my deck. If the fish get a little more stubborn I might pick up a 3/4 ounce football jig or a big worm. But this is the time of year when the bass often get really deep on the ledges and that big crankbait can really pay off. I generally stick with Sexy Shad, Chartreuse Sexy Shad and Chartreuse and Blue.

“Now when this lake floods in the spring as it has the last several years, it can be one of the best bush flipping lakes in the whole country. I had a few days this spring where we caught multiple bass over 8 pounds flipping flooded cover. There are few places in the world where you can go and do that. It’s all heavy tackle, heavy line and jigs and Strike King Rodents when that happens. I like south of Paris a lot and also some of the smaller pockets north of Paris as well.”

“I will fish the jig and worm a little more this time of year but I also really like the Sexy Dawg around grass. I will throw that topwater from March-December if the water is right for it. This is just one of the best lakes in the country for catching big bass on a topwater so I try to find that bite when I can. But I will also start punching the edges of the grass with a Strike King Rodent.”

“Some of the best days I’ve had on this lake have been in the fall when you won’t see another boat all day and they are chomping those Sexy Dawgs around big stumps and wood cover on main river flats. You’re just looking for bait, birds and cover to throw at and trying to hit as much of that as you can in a day. I recently had a day with Sales Manager for Strike King Crispin Powley where we had 15 bass between 4 and 10 pounds on topwaters. It’s just a great way to catch them this time of year. I also will throw a 1.5 Squarebill and a spinnerbait at stumps and other cover this time of year.

“Then as it cools off I’ll go back to finding those bass suspending and relating to bait again.”

It’s easy to get to Paris from Memphis, Nashville and other surrounding areas. If you want to fish Kentucky Lake and you want to catch bass a certain way, heed Lashlee’s advice and plan accordingly. There are lots of great options both on the water and closer to town. Plenty of good food and entertainment is available away from the water but the fishing definitely won’t disappoint if you time it right!

Is Kentucky Lake a regular travel destination for you? What are your favorite places on the south end of Kentucky Lake? 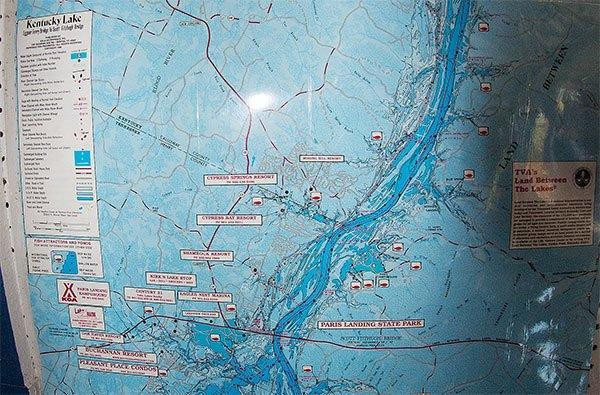