Minnesota is a top fishing destination that much of the country never thinks about. I know being from the south, the idea of fishing in the north never really entered my mind much until I visited places like Lake Erie and Lake Champlain to see how amazing the fishing was. Minnesota was the same unknown place to me for a long time, but recently we got to see how amazing fishing can be up north and how lucky anglers that call Minnesota home are to have so many diverse fisheries.

Minnesota, known as the land of 10,000 lakes, has more water than many regions of the country. Granted most of the lakes are not very large, ranging from 100 acres to several miles in length. And there are some much larger fisheries throughout the state. But in Grand Rapids, where Wired2Fish headquarters happen to be located, there are some 1,000 bodies of water inside the county. So it’s the perfect microcosm of the fishing in the state for our Visit Fish research.

We decided to sample several different lakes in the county as well as spend some time on the headwaters of the Mighty Mississippi River.

The Mississippi River in northern Minnesota is a far cry from the Mississippi River we know down south in Arkansas and Louisiana. It’s filled with small rapids, clear water, lots of dense rice, cabbage and other vegetation and full of fish. Just goofing around behind the office, we tangled with several northern pike and bass on a variety of bass lures. But it was the small lakes that really turned us into fans of Minnesota fishing.

We fished several lakes over the span of a few days including Pokegama, Loon, Rice, Reilly, and Mille Lacs. It’s amazing how diverse and different each lake was from the next. But even more fun was how quickly you can pattern the lakes, study the cover, and figure out the fish in a short amount of time.

However, the biggest draw for me being that I live on one of the most crowded lakes in the south (Kentucky Lake) was the lack of angling pressure we experienced. One of the lakes we saw no other boats, one lake we had one other boat besides us, one lake had two boats but they were both after panfish and we were after bass. Even the bigger lakes like Mille Lacs were easy to find huge areas of water to yourself with no angling pressure and lots of active fish.

Scott and Marty spent some time with us chasing bass early in the week before chasing walleye at the end of the week, and we were able to use a lot of our cover-reading skills to quickly assess and conquer each fishery in short order.

The amount of vegetation was astounding on the lakes. Cabbage grass grew out a bit deeper then it usually transitioned to rice or pencil reeds as you moved shallower. The waters on all the lakes we fished were very clear. The Mississippi River was clear but had a real tannic color to it. So the cover was easy to see as were a few bedding bass.

Probably the thing we enjoyed the most was having a small body of water to ourselves and honing our fish-finding, cover-reading and patterning skills. These are the types of fisheries that can take an average angler to a great angler quickly, because you can really learn to read the water, assess the mood of the fish and their position and then choose the best lures to attack them.

For us we found the bass readily willing to chase jigs out deep and shallow active lures like swim jigs, hollow-bodied frogs and soft swimming jerkbaits like Zoom Swimming Flukes.  Obviously spinnerbaits and other lures could work here but we were assessing the calm clear waters and bright skies and wanted to be a little more subtle in our tempting of bass.

Our first lake, we got on the water around 5:30 p.m. That seems late until you realize it doesn’t get dark this time of year until nearly 10 p.m. because we were so far north. So that gave us a solid 4 hours of fishing. Todd and Jason chased bass shallow while Scott and Terry searched for them out deep. Todd was able to get several bass chasing with a Zoom Swimming Super Fluke while Jason followed up behind him pitching a Strike King Rodent in the pencil reeds. Several times a bass would swirl on the fluke and miss it and a quick pitch of the Rodent would hook them up just about every time.

Meanwhile Terry on his first cast caught a nice keeper bass in about 18 feet of water off a sunken island. Terry and Scott went on to boat a pile of bass on football jigs with Strike King Rage Craw and Zoom Super Chunk trailers. Their best fish went 4 1/2 pounds.

Todd and I switched up to swim jigs after figuring out the best bass were on the points of pencil reeds that had deep water right up against them. We ran to the best looking point on the lake and started jamming the bass with swim jigs. We caught several bass in the 3- to 4-pound range.

The water is ultra clear in these fisheries, but because of the cover we had to use braid for much of the shallow fishing. The fish didn’t seem to mind because we were moving the baits fast and seining the area for active fish. Todd fished his Flukes on 30-pound Berkley Nanofil while Jason fished with 65-pound Sunline FX2 braid. It’s nice to be able to power fish shallow in clear water with heavy braid.

The next day we got to hit a few lakes. We hit one in the morning and found the bass to be extremely shallow past the cabbage and the pencil reeds and all the way up under overhanging trees along the bank in inches of water. We boated a bunch of nice bass on Flukes, swim jigs, Spro Popping Frogs and some flipping baits. It was a fun afternoon with a lot of bass caught, some to 5 pounds.

Then that evening we headed over to one of Scott and Todd’s favorite lakes just a couple miles from the office and we got on the water pretty late around 6:30pm. The lake was lined with pencil reads, lily pads and some coontail. As we worked around to our first area, I saw the scattered clumps of pencil reeds as perfect ambush points for bass on a swim jig. I picked up an All-Terrain Swim jig with a Missile Baits Twin Turbo trailer and on my first cast boated a 3 1/2 pounder.

It’s hard not to grin like a little kid when fishing starts making that much sense. It was like any place I thought a bass should be, there was. The obvious places with cover and depth and active forage were holding bass. They hadn’t been picked over by tons of other anglers and boats. It was almost like these bass hadn’t seen a lure in months.

Over the course of three hours, we laid the wood to the bass, boating lots of nice bass including our final bass of the night, a 5-pounder that ate a black Spro Popping Frog right at the boat at darn near dark. It was just such an awesome experience to have a several mile long lake all to ourselves and be able to read the water and the cover effectively and efficiently and put a lot of bass in the boat on a variety of different baits.

The bass fishing in this part of northern Minnesota is awesome. The walleye fishing is just as good, if not better at times. Scott and Marty went out testing some new walleye crankbaits from Bandit and had some banner days of walleye fishing about 90 minutes from the office.

Todd has been whacking the big smallmouths around beds the last couple of weeks on a variety of soft plastics like Hag’s Tornados and black reaper type baits. To see more photos from our research, visit our Wired2Fish Facebook Page and the Minnesota Photo Gallery.

Grand Rapids puts you in the heart of some great fishing in Northern Minnesota. There are plenty of places to stay, lots of places to eat and more fishing than you can stand.  You can find more information about the area at visitgrandrapids.com.  You really owe it to yourself to get away on a fishing trip like this and be reminded of what fishing was once like on quiet, calm fisheries with just nothing but you and the fish. 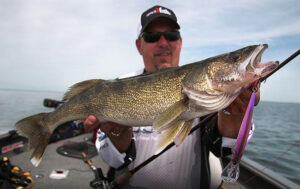