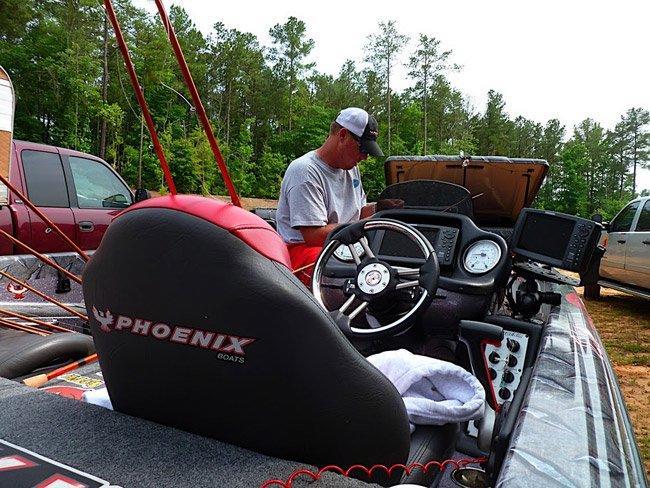 This is not a sport won by pounds, this is a game decided by inches, by ounces. With every cast could come glory.

We are less than 8 hours from the beginning of the tournament, Russ is in bed asleep, I am typing as quietly as I can because his bed is on the other side of the wall right behind me.

We’ve eaten “¦ Russ a couple of microwave meals “¦ me some Frito’s, a couple slices of American Cheese, sweet tea and ice cream.

We’ve joked around about what song I would pick for this story, I may have freaked him out when I said I was leaning toward a good tune from Barry Manilow.

And then standing by the side of his boat as he fussed with the last bit of tackle, I listened as he game planned out loud.

I listened as a friend.

I listened as a roommate.

But as I was listening, it dawned on me that I was also listening as a coach. Russ, I know, used to play baseball in college and then later for a couple years as a professional in the minor leagues.

We had talked before about what it was like for an athlete who is used to being coached, to now have to take to the field of play, alone, no coach, no halftime motivational speeches, no cheerleaders or cheering crowd when he takes to his field of play.

So I stood there and coached.

I told him I think that greatness is within.

Over the last four days Russ has asked about what I used to do at ESPN and about the athletes I’ve been around. I told him that since 1992, I’ve covered some of the best athletes on the planet, be it the NFL, MLB, NHL, NBA, NCAA, NASCAR and a bunch of others. I’ve sat with them in locker rooms, bars, the couches in their living rooms, on planes with them, in cars, busses, walked the field with them before playoff games.

Became friends with some, worked with many, had philosophical discussions with some of the best.

Knowing professional athletes like I do, was frankly, why Russ and I get along “¦ in the vernacular of the game, Russ is coachable.

“When I played ball, I CRAVED to talk to the coaches, talk to the players, did everything I could to learn. Just craved knowledge db.”

So one night, sitting here just the two of us, no TV, no iPods, he asked me about winning, and I told him about the three C’s to winning.

In one form or another, all the great athletes I have talked to have mentioned one of these characteristics on what it takes to win, to release the greatness within. The three C’s:

You give something up for everything you gain…”

In what I can only call an extraordinary exchange of ideas by the side of the boat, Russ asked me what do the three C’s mean, and I told him, it’s not for me to tell him, as you game plan for this tournament YOU TELL ME what they mean. Greatness is within my friend.

Here’s Russ, on the night before a tournament telling me what he thinks it takes to win.

“I think I have to, from practice through the event, make it perfect,” he said. “A perfect practice will lead to a perfect event. That’s very difficult to obtain because the playing field changes everyday, but your methodology has to be consistent.

“I really studied the mechanics of pitching, I was student of the game, I studied and viewed game tapes all the time. Consistency to win to me is to have the same approach, do all the little things the same way all the time, and do it perfectly.”

“That’s huge because it is so easy to give up on what you find when the conditions change. Like that old saying the grass is greener. You have to have confidence in yourself, believe in yourself, if you don’t have that you are going to hit the panic button…and lose.”

“Out here is different than other sports. In other sports, all you stand to lose is the game. But out here, if you are not brave enough to compete to win, then your family doesn’t eat if you don’t make a check. So it’s a little tougher to have courage when your livelihood is up for grabs everyday.”

“…since every pleasure’s got an edge of pain

pay for your ticket and don’t complain…”

And then I asked him the question that you didn’t think I would ask.

“So tell me Russ, which of the three C’s are you strong with, which one are you weak with.”

And to his credit he threw it back on me, “You tell me db, and I’ll let you know if I agree.”

I didn’t hesitate, “Strong … consistency … I see how you game plan for the tournament, I see you taking notes to yourself, I see how quiet you are, and I know you are like Jerry Rice … running routes in your head no matter where you are. You agree.”

Now the tough one, I saw the look in a Pittsburgh Steeler Nose Tackle when he asked me the same question, and I gave him the same answer I’m about to give Russ, although Russ isn’t looking like he wants to break me in half like the other guy.

I then asked him what kind of pitcher he was, and he told me, “I was a starter, but I was also a closer. I loved that, sprinted out to the field, threw as hard as I could and ended it.”

“db, I’m more tired after a tournament day then when I started and pitched a nine-inning game.

“Uh huh, let me ask you this, I’m betting that you are a better angler on day 3 of the tournament then on the first two … you are better once you make the check, once you get that out of your head.

“You’ve got that right.”

How do you tell a man who is trying to support his family, to forget about the money, how do you tell them to be the third day angler on day one.

If he knows that … you don’t

Greatness is within, you stand back and let the greatness work itself out

Before he went back to bed, he came out as I was writing this story and said to me, “db can I ask you a question.” I stopped typing and listening to the music on the headphones.

“db what is courage, how can you have courage when so much rides on it, your family, the bills, how do you just risk it all.”

You don’t my friend, you don’t risk it.

“Russ, if you are consistent, do your homework, game plan, if your have confidence in yourself, believe that in what you do, what you know, and have the courage to follow it up, put all those three things together, there is no risk. It’s when you don’t do all that that you risk it.”

I could still see he was worried about the courage part.

“Russ, courage isn’t swinging for the fences, throwing the Hail Mary, or the 3-pointer at the buzzer … courage embraces confidence, courage is knowing what to do and ACTING ON IT. No second guesses, that’s courage, courage is believing in yourself when it works, when it doesn’t.”

And Russ smiled and went off to bed.

Went to bed before I typed these last two sentences.

Believe in yourself my friend.

“…I will sing it loud and sing it strong…

let the echo decide if I was right or wrong.”