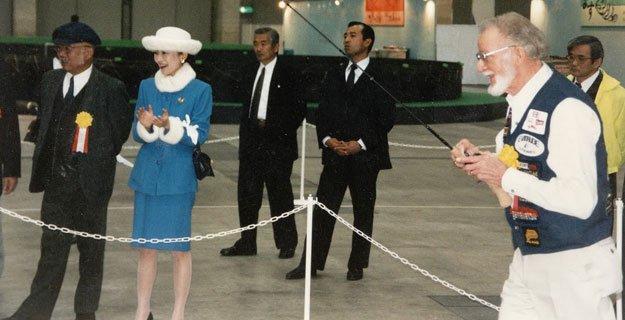 Dateline:  A Beat Up Suitcase

It’s never too late to catch a snowflake on your tongue.

Nor drink of the dripping icicle.

Or lick the snow matted on your gloves.

It’s never too late to wear a Top Hat on a sleigh ride.

Nor cut a circle in the frozen pond.

Or kiss red cheeks in a shoveled driveway.

It’s never too late to put change in the kettle.

Nor cook for those who have no kitchen.

Or believe, in Santa.

I have caught snowflakes, drank icicles, brought dinner to those with no tables, and kissed my wife’s red cheeks in new fallen snow, but Santa never got past my Hopalong Cassidy period.

Until Santa found me, in, Las Vegas.  In July.

When I went to ICAST â€¦ a fishing show that is pretty much Christmas for anglers.

A stranger to me, that I have looked for all my life, and me to him.

Who brought snowflakes to the sand.  Icicles to the desert.  And Santa back to me.

Who spoke of an old beaten up suitcase long ago packed away, and the incredible gift held inside.

A gift for me, for you, for them.  A gift only those with snowflake hair and a beard the color of the moon on snow can bring.

And his name is, Stan Fagerstrom.

To be truthful, I had no idea who the dude was.  All I knew was it seemed that everyone in the ICAST convention center wanted to have their photo taken with this tiny 87-year-old man.

White hair, white shirt, a tie in an open collar crowd, a pointed handkerchief sticking out of his sport coat pocket.  Pants with a crease, shoes with a shine.  Big glasses, bigger smile.

A bygone era stopping at every booth.

And I paid him no-never-mind.

Or so I thought.

Because I caught myself staring at the dude.  From afar, well outside his sphere of grace.  It was like that deja vu all over again even though it never happened before.

I watched him eat a fish dinner under a photo of Elvis.  The Elvis photo was taken in the same room where we were now eating.  I think he had fish, Salmon maybe, I know I had steak.  Angus.

I talked to my side of the table, he talked to his side.  For us to have spoken to each other we would have had to yell, and grace would have none of that.

He ate of those taught manners in a bygone era, but also of those brought up in an era of want.  I would talk to my left, but sneak peeks to my right, only to glimpse him watching me.

But I kept looking, somehow drawn to the elf eating Salmon below the photo of Elvis seated at about the same place as the elf.  At the same table.

In the Elvis banquet room.

The next night, I had Prime Rib, and he again had fish.  That’s an absolute fact because at this dinner I sat next to the elf, named Stan.

A few months later, with Christmas all around, Stan told me on the phone from his home in Arizona that he “knew it was meant to be,” that I would walk clear around, a round banquet table, and sit down right next to him.

He of fish, me of steak.

And that between refills of water, and freshly dressed salad, Stan would tell me a story that I will never forget.  A story that when he told me on that 106-degree Las Vegas night, I knew would be this year’s Christmas story.

A story between strangers, we’ve never met, but before dessert arrived, we knew we have known each other all our lives.

And that this chance meeting was meant to be.

There came an elf, and this is the gift he gave me.

From out of a beaten up old suitcase.

When I had none.

To be honest, I came to iCast, looking for a job.  Not an elf.  Unless the elf was hiring.

Nothing offered other than smiles.  My first night there I crumbled in the shower, sitting on the non-slip shower strips with my head buried in my hands until the hot water cascading on my head turned to ice cold to sob.

Hope swirled down the drain.  Night after night.

Until there came an elf.

Stan Fagerstrom, if you don’t know is a bona fide legend.  An award winning outdoor writer, inducted into both the National Freshwater Fishing Hall of Fame, and, The Bass Fishing Hall Of Fame.

Known as The Master Caster for his “Trick and Accuracy Casting,” Stan’s most famous trick is, “I have someone stand 30 feet in front of me, facing me holding a baseball cap with both hands right about waist level.  Then I make a cast over the fellow’s shoulder and bring the weight up through his legs and straight into the hat he is holding.”

And he must be pretty damn good at it, his wife of 67 YEARS, childhood sweetheart, Anita, “has been my practice target for years with the trick casting, still is as a matter of fact.”

At 87 years old, Stan still does a couple of shows a year and has done so “over a good chunk of the world.”

Between Prime Rib and fish came tear stained linen napkins that I hope I hid from the rest of the people at the round banquet table.

Tears, 50 years in the making.

And here’s his Christmas gift, one you will never forget.

Sixty-eight years ago today, Pearl Harbor Day as I write this story, Stan Fagerstrom enlisted in the US Army, “It was exactly one year after Pearl Harbor, which is today you know.”

He was 19 at the time, mad as hell over the Japanese attack on Pearl Harbor, ended up in Company G, 167 Infantry Regiment, 31st Dixie Division.

He speaks of horrors, both physical and mental.  Of photo’s in your mind the universe will NOT let you erase.  Of jungle sounds, still heard now in Arizona.

Limp bodies stained with blood and tears.  You will forget how loud the grenades were, how the bullets sang, the thwack of metal jackets into trees, into flesh, into bone, but you will never forget the last words of your buddy as he lay dying.

As Stan has not in this poem he wrote about his buddy, Joe Simpson:  An excerpt from his poem, “No Second Chance”

As the blood left his body his voice trailed off low

But I buried my face and his words tried to smother

As with his final few breaths he called for his mother”

“I ask God’s forgiveness for not doing it then

Because I have lived my life wishing over and over again

To be there to hold him the morning Joe Simpson died.”

In the Pacific Theater in World War II, 106, 207 Joe Simpsons were killed in battle.  And Stan spent 20 months there in battles going from island to island.

It was during this time that Stan took three Japanese flags in battle.  When the war ended and he got out of the U.S. Army, he brought the three flag Japanese soldier flags home with him, souvenirs of the war.

And he put them in an old beat up suitcase, and put that up on a shelf seldom touched.

Until one day, almost 50 years to the day, he took the beat up old suitcase down from the shelf.

Took the flags out.

And SENT THEM BACK.

“I did it to help heal the wounds that don’t heal when war is over. The war just continues to haunt me, and I thought this would be an ideal time to send them back.”

That ideal time for Stan, was a month or so before he was scheduled to perform at the Tokyo Fishing show in 1996.

“When I got there, they put me up in this beautiful hotel but I remember being there and looking out over the area where 50 years before I knew, being a part of the 8th Army, that this was where we planned to storm ashore for the Battle of Tokyo.”

The war ended before the US invasion of Japan.

But not for Stan.

Nor did it end for Shoji Komatsu.

Of the three Japanese soldier flags Stan took in battle, only one of the flags had the soldier’s name on it.

“All the Japanese government had told his family back then, was that Giichiro was dead. I filled in the blanks for the family. I told them where it was he died, when he died, and that he died bravely and heroically.”

And then came a letter to Stan, from Shoji, and here’s some of what Shoji wrote:

“When we thought of how the flag longed to return home wearily all these years, we were once again reminded of the absurdity of wars.  That the flag found its way back home through you is nothing but the God’s gift.”

Shoji went on to tell Stan of a Buddhism service that was conducted for his brother, Giichiro and, “We felt as if our anguish had been washed down after the service.  We all thank you for what you have done for us.”

And then Shoji ended his letter to Stan with this paragraph:

“These days we seem to face many problems to solve between U.S.A. and Japan.  If all of both nations should follow your thoughtfulness, I believe the peaceful world is certainly achieved.”

Shoji Komatsu, left, holds his brothers flag that was returned 50 years after the war

The two other flags, didn’t have any soldier’s names on them.  On April 27th, 1999 those two flags were presented in a ceremony to the Yasukuni Shrine in Tokyo.

Ryuzo Terui, Chairman of the Bereaved Family Association of San-nai Village, AKITA also wrote Stan, and this is what he said in his letter:

“I myself was a soldier of the army during the war, and I can imagine how a soldier should feel about a flag of the enemy.  Therefore all of us, members of the Association, can truly appreciate your generous kindness, and no words can express our gratitude fully.”

With a beat up old suitcase.

With snowflake colored hair, and a beard the color of the moon lit snow.

Who showed me that it’s never too late, to catch a snowflake on your tongue.

Nor to drink of the dripping icicle.

Or to kiss the red cheeks of your wife in the freshly shoveled snow.

Who showed a nation, it’s never too late, for grace.

Who showed the world, it’s never too late, 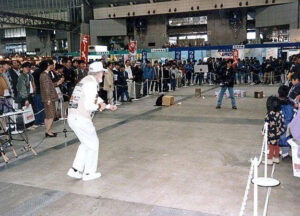