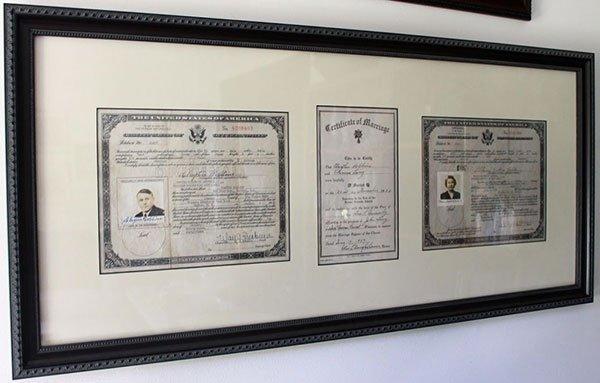 “Working hard to make a living”¦”

I would go to sleep to the sounds of the building of America.

The sound would drift up the heat vents, from the basement, to my bedroom on the second floor.

It was the song of the tinkerer, my father, at his workbench.

America, was built by the hands of tinkerers, like my dad, built not in the boardroom,

but in the basements,

but in the garages,

but in the dreams,

of the working stiffs on her soil.

Say thanks to the ones with grease under their nails and Lava soap on their sink.

With all due respect for the boys and girls in the huge booths of ICAST, the future of the biz,

“”¦bringing shelter from the rain”¦”

On my living room wall, the original framed documents of my Grandparents’ immigration to America so they could chase the American Dream and pass that dream on to me.

Both my grandparents came to America for me, even though me wasn’t born yet.

Here, there were no kings.

Here, there were no dictators.

They came to an America, with no deals,

I was closest to Grampa Clay and his wife, the lady who pretty much raised me, Tess.

Clayton Robbins married Theresa Long in Canada on November 22, 1922 and very shortly thereafter came to America where he walked steel and poured steel for most of the rest of his life.

For the first 3 years of my life I was immobile, was confined in a total body cast, and it was Clay who would pick me up and take me outside to the backyard, light up a cigar, and out of sight of the neighbors, would start singing and dancing to entertain me.

Clay was the only one in my childhood who ever took me fishing.

Tess later told me, “Clay once said he didn’t mind working in the steel plant, that he “˜poured steel for Donnie’, but hoped you would be the maker, not the pourer.”

After Clay died, my Gram’s younger brother, Jim Long became my surrogate Grandfather, and to some extent, Father.

My son Jimmy is named after Uncle Jim.

It was Uncle Jim who ultimately became the most important person in my life.

Uncle Jim was a successful entrepreneur, and back in the 1950s and “˜60s, the richest guy in our family.

His wife, my Aunt Irma, is the lady who taught me to read, also was a working stiff who in the late “˜50s graduated from The University of Buffalo with a MASTERS in Nursing”¦ pretty much back in the days when that was unheard of.

Neither one of them, both who also came to America from Canada, EVER talked to me of the success, they only spoke of all the failures it took, but most importantly, how they never lost the dream, “You work hard Donnie, keep your nose clean, keep chasing your dream, and you will one day catch it like Uncle Jim and I have. Donnie there’s a dream out there waiting for you.”

And to all those in the small booths,

a dream out there,

I know that’s true, because in a medium-sized booth at ICAST 2013,

I came face to face,

Jeff Martin, the son of a very successful father, now himself, a very successful man, and father, is a great friend of mine, the closeness of a younger brother, a board member of Tackle The Storm, a dude I call, Monkey-Monkey, from a private joke between us”¦ and the owner of Vicious Fishing.

I have never told any one this before, not even Barb, but I’m driven to work constantly to help the children that Tackle The Storm was founded to help, work day and night, 7 days a week,

but deep down inside,

I do it for Clay,

for Uncle Jim and Aunt Irma,

for, and IN their honor.

They prepared me for the dream, and the hard work the chase involves.

They, and my father, passed on to me,

As did, Jeff Martin’s father and mother, Sylvia.

Jeff went from selling tropical fish to Walmart, to catching fish with his somewhat new-to-the-market fishing line sold under the name of Vicious.

His marketing folks may shoot me over this, but Jeff, is anything but Vicious, and is in fact one of the most gentlest, giving, spiritual folks I have ever met.

That was the reason I asked him to join our board, no other reason. 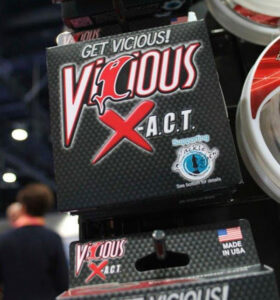 But when I walked into his modest booth at ICAST and saw his new fishing line, the Vicious X-A.C.T., and down on the corner of the box the Tackle The Storm Foundation logo, knowing that a portion of the sale of every box of that line will go to Tackle The Storm to help kids, all I could say was this,

for showing me its,

alright to be a working stiff,

And that your guiding hands will help put rods and reels into the hands of hundreds of children who have lost their magic wands of childhood, their fishing poles, to the storms in their lives. 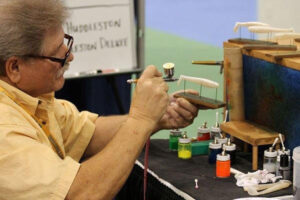 Dream on my tiny booth friend, to me, you are the soul of ICAST.

and all those tiny booths to come,

In every big booth you will find someone with grease under their fingernails and Lava soap on their workbench or sink.

Every big booth comes with bruises, comes with failure, but got here on a dream.

Look down the aisle to ZEBCO, got here on the dreams of an inventor who was also a watchmaker and barber.

Look down the aisle to POWER-POLE, got here on the dreams of an inventor who wanted to make a better anchor to help him fish.

Look to a black box of fishing line with a tiny blue logo on its corner.

If you in the tiny booth have a dream that is an obsession, chase it.

It is THE CHASE that will make the dream, not the other way around.

and the song of the tinkerer that drifted up the heating ducts,

and lulled me to sleep,

by the man who cradled me in his arms with grease under his fingernails,

and love in his heart,