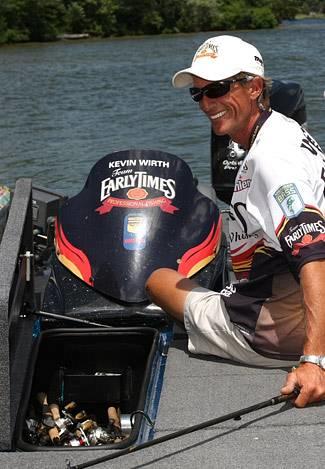 Going forward, whenever we mention pro angler Kevin Wirth, can there be a moratorium on linking him to that big party that occurs every May at Churchill Downs, the one with the mint juleps?

While his connection to that big event may be a curiosity, it’s ancient history now.

Wirth, for one, is tired of it: “I want to be noted as a pro angler,” he said. “I’ve worked as hard as anybody out there.”

The work has certainly paid off, to the tune of nearly $900,000 in BASS winnings and nine Bassmaster Classic appearances. Although he’d won the 1994 South Carolina Invitational on Santee Cooper, a tour level win had been exceptionally elusive to him in recent years, as evidenced by five 2nd place finishes.

“I’m very competitive, but I pretty much thought it would never happen,” he said. “Something always happened to mess it up, whether it was Mother Nature, a guy coming in on me, or someone catching a five pounder to cull out a two pounder on his last cast.

So when he won last week on Tennessee’s Old Hickory, there was still a bit of disbelief up until they handed him the trophy and the check. “On Sunday I thought that I blew it again. I lost a four pounder. I figured someone would catch a twenty pound bag and beat me.”

There’s nothing to be ashamed of in earning a second place finish in a field consisting of the best anglers in the world, but Wirth had five of them hanging around his neck like a giant albatross, and he readily admitted that they weighed upon him.

“It got to be senseless. You go over them in your mind so many times,” he said.

Two of his bridesmaid showings came at the hands of Art Ferguson, who now fishes the FLW Tour.

“I’d like some revenge on Art,” Wirth said. “I owe him something, that dirty little rat. No, seriously, he’s a pretty good friend of mine.”

While he didn’t get a chance to put the smackdown on Ferguson, it was a particularly satisfying win for a couple of other reasons. First, he “elected to do something against the grain” by getting away from the crowds.

“If anybody had shown up, it wouldn’t have been a pretty picture. Until the last day, no one had a clue what I was doing.”

On top of that, if you had predicted a win for KW at the start of the 2008 Elite Series season, you probably would have guessed Kentucky Lake. Not only is it close to his home, but everyone knew it would be a ledgefest, and popular opinion assumes that’s Wirth’s strong suit.

“Everyone thinks all I can do is Carolina rig because that’s how I won the Invitational in 1994. This gives me a place in fishing, shows that I’m pretty versatile. I’ve almost won tournaments by sight fishing, flipping and structure fishing.”

Now that he’s in the rarefied company of Elite Series winners like the other Kevin, does he look down on the little people who haven’t tasted that rarefied air? How does he intend to treat veteran pros like Gerald Swindle and Bernie Schultz who have established tremendous careers but have always seemed to come up just a bit short in individual Elite Series tournaments?

“They’re all my friends. When they get in the position (to win), I’ll lead the support for them. There’s no better feeling.”

He admitted that he changed his style of fishing this year to be more aggressive on the water and recognizes that such aggressiveness may have bit him in the butt, resulting in a middle-of-the-pack status heading into Old Hickory. But maybe it takes a few missed swings to hit it out of the park.

He was on the fish to make the Top 12 at Kentucky Lake, Murray and Wheeler, but only managed a Top 50 in one of them. In some respects, the subsequent appearance in the winner’s circle makes up for those misses.

“I’ve learned that it’s hard to win in this day and age. You can’t ever leave something hanging. You have to scarf up what’s there for you,” he said.

Now that he’s inside the Classic bubble, at a respectable 30th in the AOY standings, he’s aware that the pressure’s on. But there are two more derbies to go, fishing derbies. Tennessee, not Kentucky, may be the place where he pushed his career and notoriety to the next level – and for reasons that have nothing to do with a little pony show almost thirty years ago.