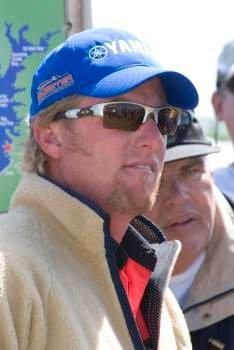 If you’ve been around Texas pro Kelly Jordon even a short while, then you know he’s talkative, opinionated and, when it comes to fishing, usually right.

It was his outspoken nature that led Gerald Swindle and Marty Stone to semi-affectionately dub him “TK” for “Talking Kelly.” So you know it must’ve killed him to keep the big spoon he’d been using to whack deep water fish a secret from his friends, the outdoor media and some of the other pros on the Elite Series tour.

OK, maybe it didn’t kill him. After all, he was probably catching a bunch of deep water fish while others struggled. Maybe he has a few more secrets up his sleeve. But it couldn’t have been easy not to lord it over his buddies on the trail.

We caught up with the captain of this year’s winning team at the Toyota Texas Bass Classic, held at Fork, as he prepared to work the June Skeeter Owners Tournament, also at Fork. That’s one of the perks of living in

Mineola: he and his mates can win a quarter grand, receive their checks Sunday night, and he can get friendly with the bank teller the next morning, all the while sleeping in his own bed.

Now remember, there’s nothing all that new about spoons as fishing lures.

Baits like the old red ‘n white Dardevle were staples for decades until they were muscled out of the way by trendier presentations and left only for once-a-year anglers on their summer fly-ins to Canada. The Johnson weedless spoon also found a place in every bass angler’s tackle box, but it was gradually replaced by frogs and toads and other slippery topwaters.

But Kelly has been spooning longer than most of his peers. He’s also been friends with Lake Fork area lure designer Joe Spaits for over twenty years, so he’s a front line recipient of some of the most innovative tackle around.

“He’s been tinkering with giant spoons for a while and he started giving a few out four or five years ago,” Jordon said, making clear that he was amongst the first to adopt the new technique.

The first time he fished the lure was at a Skeeter Owners Tournament on Fork and he quickly realized the lure’s potential.

“I went out in a two hour shootout and on my first spot I caught 25 five between four and six pounds.”

How’s that for instant confirmation?

Subsequently, he used the spoon to bag his largest-ever Fork limit, a whopping five fish for 54 pounds, part of a best ten that weighed 101 pounds that day, all on this odd-shaped piece of metal. Yes, you read correctly, KJ passed the century mark on only ten fish. Maybe Falcon doesn’t have anything on Fork.

“Then on Kentucky Lake two years ago I made the top twelve (on the spoon).

John Murray saw me throwing it and asked about it, but I wouldn’t even show it to him.

“At that time I was the only one throwing one.”

But all good things must come to end and the pursuit of a win on “Ultimate Match Fishing” let the spoon out for the whole world to see. Internet message boards were abuzz about how he’d caught his big limit in a showdown with 2007 Classic winner Boyd Duckett. Texas anglers pillaged the marinas around Lake Fork for the few remaining baits.

But worst of all for Kelly, his competition caught on: “For a long time, I was the only one (on tour) fishing it. But last week, Paul Elias caught most of his fish at Kentucky Lake on it. Even VanDam threw it some.”

But the image of the lightning-fast KVD doesn’t necessarily comport with the mental picture of someone parked above a sweet spot, patiently twitching and hopping a hunk of metal to aggravate semi-active bass.

“No, it sinks fast, it’s a big bait and they let you know quick if they want it,” Kelly said.

He throws it on a medium-heavy rod paired with an Abu-Garcia reel spooled with “at least 17 pound Trilene. When you get the bite, you just put the screws to them and reel them in.”

And while his good friend, fellow Lucky Craft staffer Joe Thomas, managed to give up Kelly’s secret through his TV show, don’t think old TK doesn’t have a few secrets left to share.

“I thought about using it last year up at Erie,” he said. “I’m sure those smallmouths will smoke it.”

But if he’s telling us that only a few weeks before his big derby on Erie, what isn’t he telling us? What old school/new school technique does Mr. Jordon have up his sleeve? And will he ever be so forthcoming on TV again?