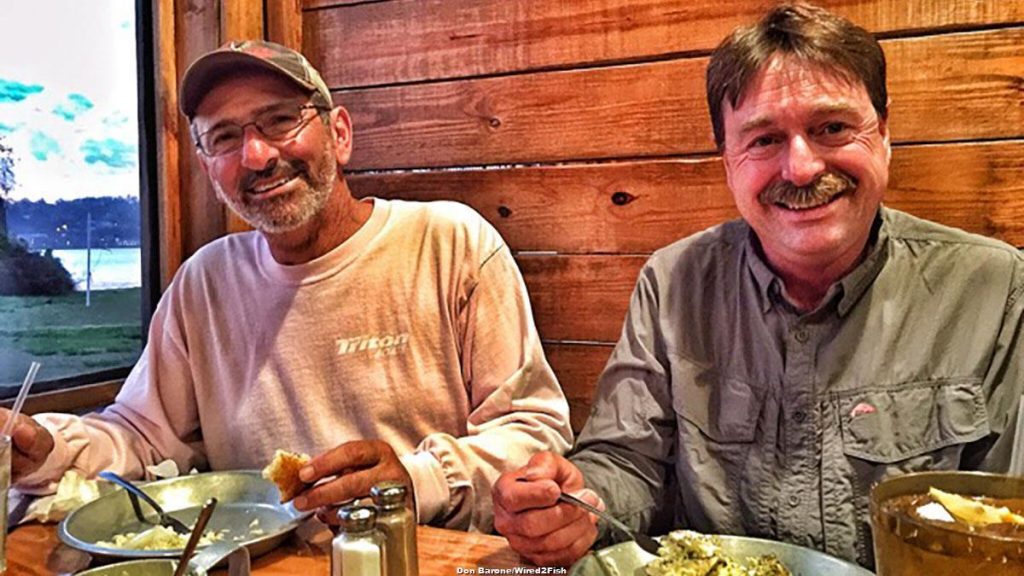 “Can I get the Riverboat Special but with a triple order of fried catfish.”

I have probably had over a 100 or so dinners with my roomie, Shaw Grigsby in these past 4 or 5 years, and yet, and yet he still manages to amaze me with:

#3: His pure unadulterated love of eating the kind of food he eats.

You a big eater, you ain’t got nothing on this dude unless you are on one of those where-do-the-find-these-people “reality” shows star about guys who weigh as much as everyone on my block back home.

I have seen Shaw “roommate naked,” not fully way-way-way-way-to-much-info nekid, but enough nekid to wonder why I put on 5lbs by licking an ice cube, and he can order the entire menu and not gain an ounce.

Paul and I hate him for that fact.

Love him otherwise, just wished he came closer to our belly profiles.

So, we are at angler food paradise:

2% sides that are leafs or green things that we can take a photo of and send back home to our wives to prove we are eating right.

Across from me Paul and Shaw sit behind various piles of: Fried Catfish, hush puppies, corn bread, Cole slaw and pickled onions.

Paul: “Oh ‘d, you’ve been snacking.”
Shaw: Wiggles his finger at me, which I can’t figure out how to quote.

Me: I have to protect my bellyhood now, “I have NOT. Only had 6 pieces of crisp bacon (3 minutes on high in the microwave), 4 pieces of burnt bacon (the 1st 4 I cooked I did on 4 mins in the microwave on the smoke alarm ringing setting), 4 slices of good for you cheese wrapped around fresh cut Pepperoni, a few handfuls of cashews, 4 of those blue Easter peeps and a can of DIET Cream Soda.”

Shaw, Shaw is looking at me, I know he is on the Mendoza line of whether that was just a snack or not. I’ve seen him eat more on the CAR RIDE to the restaurant.

We have a roommate rule: It has to be unanimous for it to be a screw up.

So, just as I’m stirring some sugar into my sweet tea I feel the booth move and I look over to Shaw and I’m shocked to see some guy, some stranger basically sitting in his lap.

Out in the restaurant aisle the man’s wife is laughing and saying he is “the selfie king,” and the “selfie king” (turns out that’s not his real name which is Blake Couch of somewhere in Alabama) is telling Shaw how big a fan he is of Shaw (obviously the “selfie king” has never been on the hook for a Shaw dinner) and how he watches his TV show all the time, then asks Shaw when the TV show will be on, and takes a selfie or 4 and gets up and leaves.

Blake was a nice guy, he scared me but Shaw didn’t have a problem with it since Blake only took a selfie and not his catfish.

And with that, our dinner conversation was set: Fans & Social Media.

So here we go, pull up a chair, make sure the kids are in bed and take a seat.

Shaw puts down his fork, this is going to be a good story.

“I’m working this sport show in Maryland, January, wall to wall people. So I need to go take a pee but you have to stand in line to get into the bathroom, so I stand in line and then finally it is my turn at the urinal, I finish and the guy next to me finishes and we start walking out in the line to get out and this guy starts looking at me, now “d” it is massively crowded and I just want to do my business and get back to the booth, and suddenly this guy asks me, ‘Are you Shaw Grigsby,” and I say yes I am, and then, then…”

Next to Shaw, Paul starts laughing…

“…and as he is shouting this all these people all over the place start looking at me, and I get all red faced and look like a Shaw Grigsby beet.”

I once peed in an airport john next to Richard Petty, in truth was probably one of my top 10 favorite moments at ESPN.

So in a weird way that only the universe can set up, I know exactly how the guy who peed with Shaw felt.

“Did the selfie king bother you.”

“No, not at all, he was very gracious, seemed like a nice man, without fans I wouldn’t be sitting here today.”

Paul: “I wasn’t peeing, I was fishing in Chattanooga and pulled up to my first spot of the day, going to fish this long bank…”

I help myself to Shaw’s cornbread, Paul’s Cole slaw.

And then Paul starts laughing.

BTW, some inside info here, Shaw and I have been calling Paul…Paul Galias for years now when no one is around.

Both guys have several thousand “friends,” and fans on all the various social media things out there.

Shaw: “My wife Polly does a lot of my stuff when I’m on the road, we both do it when I’m home.”

Shaw and I look at each other with that “thank goodness” look because we both have watched Paul over the years try to figure out an iPhone…if Paul starts to do his own internet stuff, the internet will end.

Paul: “And that kind of stuff is huge for our sponsors, I send them numbers like that quarterly, the interaction with fans that the internet allows for is great.”

I would not have the job I do if not for the internet, and the fans, the people out there who read my stuff on this World Wide Web thing.

And I thank you.

As does Paul, as does Shaw. 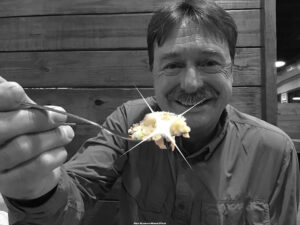 It’s 8:15pm, way past our bedtimes, we get the check, say goodbye to the “selfie king,” Blake, in the next booth and leave.

Back in the house we are renting the guys shower and put together their fishing stuff for the last day of practice, the lights get dimmed, the “good nights” are said and we all head to our separate bedrooms.

Paul with a yellow Peep in his hand.

Shaw with a Green Peep.

And me, with the box of purple peeps in hand.

We’ll keep a chair open for you at our next Tuesday night dinner at:

“…you just call on me brother.”
Lean on Me
Bill Withers