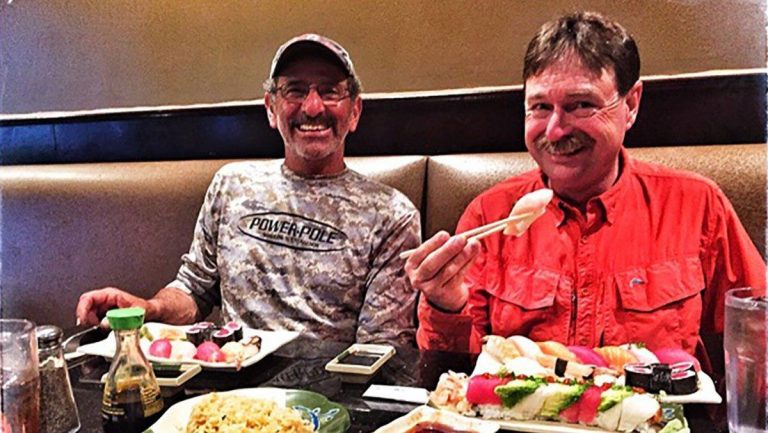 “You see the little sucky things…”

There is an octopus tentacle 6 inches from my face.

I in fact do see the little sucky things.

In the past 4 years I have had stuck in my face: crawdads, frog legs, fish heads, a part of a snake, and one time, one time, a dead armadillo tits up on a silver serving platter.

Welcome to my Tuesday night dinner with my roommates, Paul Elias and Shaw Grigsby.

For the record I stopped eating anything that wiggles when I was 8 years old and my best friend next door, Boogers Paul, somehow painted an earthworm yellow and told me it was “a new candy wiggly jelly worm.”

I have since evolved to not eating anything unless it has a bar code on it.

Shaw Grigsby will eat anything that wiggles and fits between chopsticks. If it crawls by and you can somehow dump wasabi on it, whatever it is crawling needs to be afraid if Shaw is around.

Shaw does not need barcodes to feast.

I know for a fact that the Olive Garden does not stock enough olives for Shaw’s salad.

Been there for that.

Paul Elias on the other hand, is almost a bar code on food guy. I have seen him eat some wiggly stuff but only after watching Shaw eat it and the mandatory dinner 10 count.

If Shaw doesn’t spit it out after we count to 10, Paul will try it.
They could count to 10-million, and I will still pass on wiggly things.

So here’s the deal, during the Elite season I room on the road with Paul & Shaw and every Tuesday night we make it a point to go out to dinner together, been like that for years now, me, Paul, Shaw.

But this year I’m pullin’ up a seat at the table for ya’ll.

Timing is everything with the Elites.

Not let me explain how this is going to work in case you are a high school English teacher already driven crazy by the way I write…this is going to be even, you know, more, different.

You see, WE ARE EATIN’, whatever comes into our head between chews, that will be this here “story.”

Sweet tea going in is darn good, sweet tea coming back out your nose, not so much.

Sweet tea comes out my nose when I hear stories of Bill Dance, toilets and snapping turtles…you fill in the details.

Also a story about “coots” in a livewell to scare someone. I think the “coots” they are talking about may in fact be birds and not the old guys who always manage to drive 15MPH in front of me.

Me: “I don’t see many practical jokes being played out here.”

Shaw: “You can’t anymore, to much at stake, to much money invested and on the table, sponsor worries, press worries.”

Paul: “If there were pranks being done out here every launch Swindle’s livewelll would be filled with bananas.”

Footnote not at the foot of this: Swindle has a thing, a real thing about bananas in his boat.

Shaw: “Back in the day it was much looser, the guys back then, they would do it just for the love of it, not saying we don’t do that now, but now you got to have a puckered butt out here…”

I’m looking over at Paul, he’s looking down in his lap, one of two things, he’s dropped a wiggly thing or…

Shaw leans over and looks at Paul’s iPhone, both are looking at the results of the last Elite tournament here on the Sabine River.

A wiggly thing is picked up, dipped in some kind of dip that hides the taste of the wiggly thing and Shaw resumes the conversation.

“…I really do have so much respect for the guys who blazed the trail for us, Jimmy Houston, Bill Dance, Roland Martin, Tommy Marten…”

Paul is now scrolling through facebook on his phone, “Hey…did you see this Michelle Kilburn just got engaged.”

Shaw: “That’s my boss at Mercury.”

I knew that, and we all toast to Michelle’s engagement.

Even though I have managed to shrink my entire name down to 2 letters, Shaw has shortened it even more, to just, ‘d.’”

“Been a crazy off season, had both shoulders done, one rotor cup was 90% messed up, the other 40%, both filled with bone spurs, then I had my knee scoped, and while under they shot up both elbows.”

Paul: “I need that on my elbows, should have done it but didn’t when we were off but it is getting worse.”

I ask why and get a very quick lesson in Elite math.

Paul: “I probably today pitched to the bank maybe 4 times a minute for 10 hours straight, no break…”

Having lived with these now for 4 years I can attest to the fact that practice is harder on them then the actual tournament. During practice they both leave before the sun comes up and don’t come off the water until the sun sets.

As he says that, both, no, ALL three of us rub our elbows.

Paul is looking at his phone again, scrolling with one hand, eating with the other, “The one thing about this place is that it’s all about getting into a little nook, back in there where it is hard to get into…”

Shaw: “…but you know what, these are the Elite guys out here, no stones will be left unturned, no place no matter how hard will not be found, I once pulled way up this little creek, pulled myself under branches, over stumps, sand, just to get back in this little pocket and when I finally get back there…”

We chew on that, and some wiggly stuff for a moment then Shaw puts down his chopsticks, wipes his mouth and says, “Quick story.”

Paul and I have bunked with him for 4 years now, instantly the mood at the table changes, we know, can feel, something is up.

“Back when I was 16 years old, me and a buddy went up to the Suwannee River fishing for Drum (a fish). We would see the water all churned up where they were at and would throw to where it was blowin’ up and catch us one, maybe two.”

Shaw takes a sip of water with lemon.

“Well one day we see this other guy in a boat fishing for Drum as well and he is just assassinating them, thunk in the water, yank one on board, toss again, yank one on board…so we get to talking with him and he helps us learn how to catch more than one Drum, as we leave I ask him his name and he tells me, Doug Odom…and I kind of freak and say…what the Doug Odom I been reading about in Bassmaster Magazine…and he says, yep.”

I’m listening while playing with my fried rice, when I look up at Shaw I put what I see makes me put my fork down.

His eyes are red, and tearing.

“Well ‘d’ some 25 years later I’m speaking at a banquet and he is there as well, so I go up to him and tell him the story of how he helped two 16 year old kids catch Drum on the Suwannee…”

Shaw stops, tries to compose himself, but really can’t.

“…well Doug, Doug he remembers and we become long time friends, just went fishing with him the other day, turns, turns…”

Shaw, Paul and myself will probably be roommates on the road until we all hang it up, and then each of us know, we will also be long time friends because now we are family.

We are tough guys strong enough to shed tears together. Friends like this come sparingly in life.

Both Paul and I watch Shaw with comfort in our eyes.

“…turns out he, Doug has cancer, pretty serious, he believes in God and is not afraid to die, but, but, you know…”

Without looking at each other, without any clue from each other, all at the table instinctively bow our heads.

And so as we left the restaurant in the parking lot we all shook hands, hugged as we always do, I held on to Shaw’s arm just a fraction longer, knew my brother was hurting, told him I would put in an asking for a prayer for Doug, no problem.

Shaw and Paul drove together, so they left in Shaw’s truck together but I sat for a moment in my Tundra and said a silent prayer, as much of a prayer as I can say, for Doug…

…said one for all those who blazed this trail for us…

…but the longest one, said one for my roomies.

Roomies, now with a piece of my heart.

“…you just call on me brother.”
Lean on Me
Bill Withers

I’ll save a seat for you next time, Elite #2, Guntersville, Al,