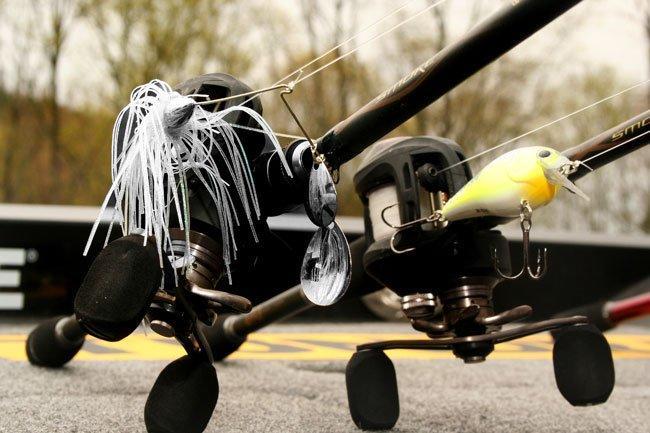 Perhaps the greatest irony in the perceived recent death of spinnerbaits along the Bassmaster Elite Series trail is that the sport’s most dominant angler is the one who seemingly depends on them the most. “Heck no they’re not dead,” exclaims Kevin Van Dam. “I used a spinnerbait as my primary lure all day long during the first day of this past year’s Bassmaster Classic in New Orleans.”

Before you begin to argue that even KVD couldn’t make the spinnerbait bite last all week at the most recent Bassmaster Classic, seek first an understanding from the man himself. “By the second day of competition the fish were actually spawning on the stumps, as opposed to roaming near them like they did the first day when I caught them on the spinnerbait,” said VanDam. “It seemed like they were bumping the spinnerbait with their mouths closed the second day, so I switched to the squarebill to force a reaction bite using a lure with treble hooks,” he added.

“The fact that we haven’t seen a spinnerbait win a tournament in recent years is really more of timing thing with our Elite Series schedule,” said KVD. “We just haven’t been to many places with high, dingy water levels at the right time of the year in a long time,” said VanDam, who upgrades gear ratios from the 5.3:1 he uses so frequently for crankbaits, to a 6.6:1 Quantum Tour KVD or EXO when he’s fishing spinnerbaits, spooled most often with 20-pound fluorocarbon.

Like his long-time Quantum teammate Mike McClelland, KVD cites sales records as best evidence that spinnerbaits are still sought after. “When I talk to the guys at Strike King, they don’t express any concerns about a drop-off in spinnerbait sales. They still sell a ton of them,” said VanDam, the reigning Toyota Tundra Bassmaster Angler of the Year and Bassmaster Classic Champion.

“I think the average guy tends to overlook the variety of specialized spinnerbaits that are available these days that can help you get more bites,” commented VanDam. “For example, Strike King’s Burner is a more compact and heavy bait that I can retrieve a little faster than the average spinnerbait. There just aren’t a lot of days on tour anymore when you can just cast the old standard 3/8-ounce spinnerbait with tandem blades and get bit.”

While overly likeable B.A.S.S. photographer James Overstreet and the rest of us struggle to spot a spinnerbait on the decks of Elite Series anglers’ boats, count on VanDam, the sport’s most dominant angler, to be among the very first to pull one from his rod locker, prove its effectiveness en route to victory, and quickly resuscitate its trendiness.

VanDam got his first professional win 19 years ago using a spinnerbait on Lake Lanier in December of 1992. There’s a good chance he’ll get his 21st win in 2012.

“I carry loads of spinnerbaits,” said VanDam. “Trust me, they ain’t dead.”

Editor’s note: This is part 2 of 2 of a story about the perceived diminishing impact of spinnerbaits along the Bassmaster Elite Series trail. To read part 1, Please Click Here.