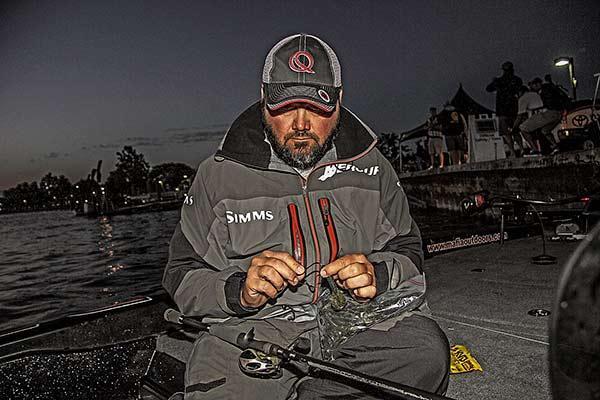 Outlaw country music singer Waylon Jennings once said that Nashville tried to destroy him by making him dress, sing and do everything a certain way. “I just went about my business and did things my own way. You start messing with my music and I get mean,” said Jennings.

If bass fishing had a Waylon Jennings, it might very well be Greg Hackney.

Smallmouth are absolutely dominating the weigh-in stage at the Bassmaster Elite Series Plano Championship Chase. Many of the leaders are running one to three hours en route to hooking up with St. Clair and Erie’s famous “bronze tunas.”

Not Hackney – he ran just 28 minutes, and fished for largemouth. And in turn caught enough to sit well inside the Top 50 cut going into Day Two.

“If I’d have caught a smallmouth, it’d have only been by accident,” laughed Hackney. “I knew I couldn’t win here with the 3-pound smallmouth I was catching in practice, and I’m still regretting that I didn’t fish for largemouth at the last Elite in New York, so I made up my mind that I was going to do what I like best, and fish for largemouth here.”

“I listened to way too much “˜dock talk’ at the New York event, and it may have cost me making the Bassmaster Classic,” lamented Hackney. Regretful not only because he may have missed bass fishing’s biggest dance, but equally as perturbed because he failed to be his own boss.

“I should have listened to myself. That’s what I’ve done my whole career,” said Hackney at pre-dawn launch today. The $3 Million he’s banked in prize winnings over the past decade proves that listening to himself is what works best for the father of four.

“Even my wife Julie will tell you I’m not a team player, I don’t do well following along with everybody else’s plans, although I have learned after 14 years of marriage that the boss of our house is Julie,” grinned Hackney.

Talk to Hackney about family and that’s where you’ll find the heart beneath the beard and somewhat sandpapery style. “My youngest is age 2, and my oldest 13, and it’s getting tougher and tougher for me to be gone from home for very long,” reflects Hackney.

But before he can get back to hugging Julie and the kids, checking trail cameras for whitetails, and filming as a host of Louisiana Sportsman, there’s at least one more day out here this season, and he’ll spend it pitching a Strike King Twin Tail Menace Grub behind a heavy-weighted Texas rig to St. Clair’s largemouth in 4 – 12′ of water.

“Quantum doesn’t make Hack Attack rod for Smallmouth,” laughed Hackney, in reference to the fact that his signature 7′ 11″ heavy action rod was obviously designed for jerking largemouth, not smallmouth, from the gangliest of habitat offerings. Hackney is matching his signature Tour Tactical rod to a speedy 7.1:1 EXO 100 reel, spooled with 50-pound braid. And nope, unlike 90 or more other Elite Series anglers, there are no spinning reels on Hackney’s front deck this week.

“I may not make as much money this week as the guys making that long run to catch big smallmouth near Pelee Island on Erie, but I’ll have more fun.” Doing it his way. An approach perhaps best described by a 1986 Waylon Jennings’ album title “Will the Wolf Survive” and the top single “Working Without a Net” whose lyrics seem to fit Hackney’s thoughts of home and career perfectly.

“Some want you to fly, some want to see you fall. Now and then I stumble, but I ain’t fallen yet. Your love helps me forget, I’m working without a net.”