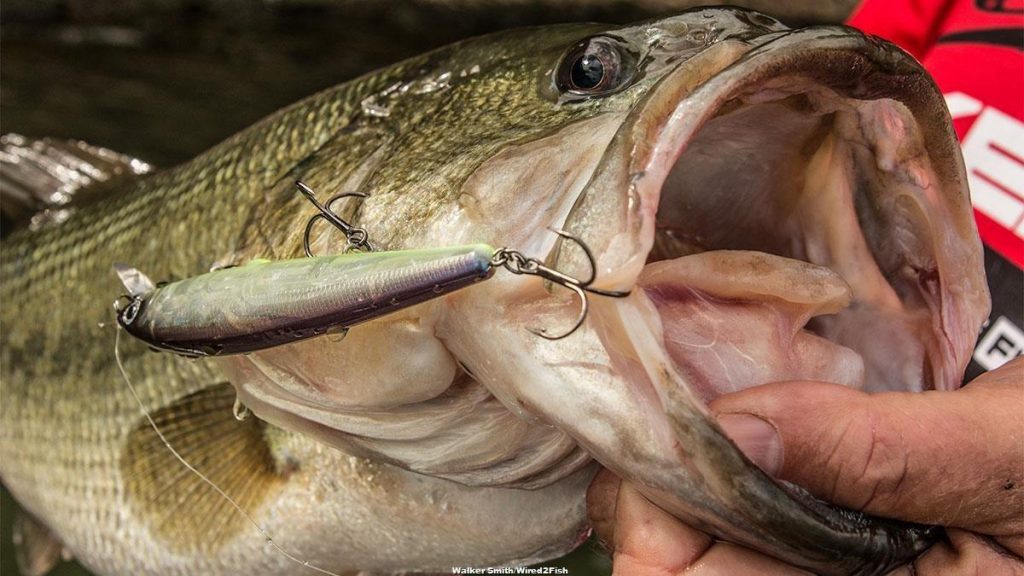 Of the questions we’re most often asked about our travels and interactions with the world’s best professional bass fishing anglers, how we apply them to our own fishing endeavors is often at the top of the list. As one could guess, there’s no short answer to this loaded question.

Bad days of fishing happenâ€”nobody is immune to them. These tough days, however, are often when we find ourselves mentally sifting through hours, pages and thousands of words of our own content in an attempt to turn our luck around. If we’re honest, it can be an information overload at times.

We thought it would be interesting to sit down together and construct a list of the most unforgettable fishing lessons we’ve learned from our work with professional anglers. Although it’d be impossible to list all of the tips and tricks we’ve written about over the years, these particular teachings have repeatedly bailed us out of some subpar fishing days and we believe they’ll do the same for you.

You can access the original articles by clicking on each bolded subheading.

Stick to your strengths in tough conditions 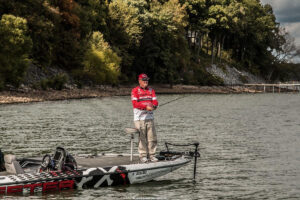 When it seems like you can’t buy a bite, how often do you find yourself digging through your tacklebox looking for the “magic” lure? Common logic tempts us to assume that a simple process of elimination would be enough to eventually remedy even the toughest bite.

On numerous occasions, Mark Davis stressed to me the importance of sticking with your strengths on slow days of fishing. After applying this to my fishing, it has changed the way I’ve approached adverse conditions.

I’m most comfortable with shallow power fishing such as cranking, pitching and froggingâ€”I’ve done it all my life. More importantly, I have a lot of confidence in these techniques. So if I’m having trouble getting bites, I’ll put the majority of my rods away, stick a few crankbaits and jig on my front deck and hunker down. It might not be the “hot” bite at the time, but I know that I’m able to put these two baits in high-percentage areas consistently. It’s a numbers game, essentially.

Experimenting is great. It’s how we become better anglers. But if you’re looking to gain confidence in a new technique, why try it when the bite stinks? Davis argues that this will do more harm than good in the long run, and I can’t say I disagree. â€”Walker

Be a more proficient caster 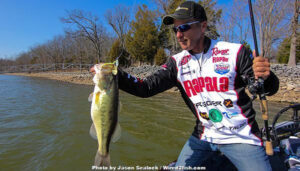 Anglers know that casting matters. You have to be able to land close to targets, but it’s often not good enough to just land near targets. Quietly putting your baits into places other anglers cannot is the ultimate goal.

The shallower the fish go, the better and quieter your casts must be. Sometimes you have to keep a lot of distance between you and your targets and you have to be able to skip, roll cast, flip, pitch and present your targets quietly, with minimal splash to get the bites that everyone else misses. I’ve spent a lot of time on the water with Terry Bolton and Gerald Swindle, and I’ve seen first hand how a very accurate, quiet cast in shallow water catches a lot more fish. â€”Jason

Timing is everything when you’re targeting big bass 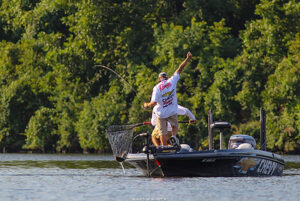 I’m a stubborn guyâ€”ask anyone who knows me. Unfortunately, this character trait leaks into my fishing on a regular basis. Until a few years ago, I always wondered why I would routinely catch big bass in tournaments, but I could never catch smaller bass to fill out a limit.

After talking to Bryan Thrift, however, I learned why it was happening. He believes that big bass don’t stay in specific, shallow-water areas for very long. They’ll be somewhere in the surrounding area, but they’re most accessible and predictable during very short feeding periods throughout the day. The window of opportunity is sometimes just a few minutes.

In the past, if I caught a big fish in an area, I’d stay there for far too long. My stubborn streak would tell me that there had to be more big ones there. If I couldn’t catch another one, I’d write the area off and not return for the rest of the day. But I wasn’t taking the “timing” aspect of things into consideration. Instead of milking a dead area for hours, I should have been fishing fresh water and, more than likely, catching more keepers.

His advice has helped me realize the importance of finding multiple big fish areas and fishing them in a systematic rotation. If they’re up and feeding, I’ll usually catch them in the first 10 casts. They’ll let you know if they’re there. If I don’t get any bites, I’ll quickly move to my next area and repeat the process throughout the day. This strategy has been especially productive for me throughout the prespawn and has led to several big tournament wins for me. â€”Walker

A lot of people quiz us about line, hooks and more when they are having problems with fish getting off. But more often than not, we find it has more to do with the act of hooking the fish than it does the equipment.

I went through a frustrating spell where I broke fish off a bunch. This slump forced me to alter my hookset and developed some bad habits. But after having a long discussion with Greg Hackney about reeling and setting hooks, I’ve had a much better time with catching fish that bite. â€”Jason

Muddy water bass are like humans in a dark room 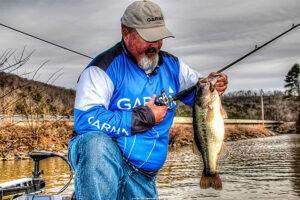 The following quote from Dion Hibdon opened my eyes to dirty water fishing and has totally changed the manner in which I fish it.

“If someone cuts the lights off in your house at night, the first thing you’re going to do is get to a hard wall and feel your way around. When rain dumps a bunch of mud into an otherwise clear fishery, the bass will do the same thing.”

After implementing this strategy, my success rate when through the roof. I had never caught so many big bass in my life. I’d find muddy water and fish crankbaits parallel to long stretches of seawalls and riprapâ€”I wouldn’t get bit unless my plug was within an inch of the seawall. These bass couldn’t see very well, so they were cruising tight to the bank in order to counteract the low visibility conditions.

I also learned the importance of making repeated casts in these situations. If the bass are having a hard time moving around efficiently, it’s going to be even more difficult for them to see your crankbait. So if a piece of hard cover looked good, I’d cast to it more than a dozen times before moving on. I’ve caught several bass weighing over 7 pounds using Hibdon’s advice after making over 20 or more casts to a particular piece of cover. â€”Walker

Mastering your electronics will lead to more catches 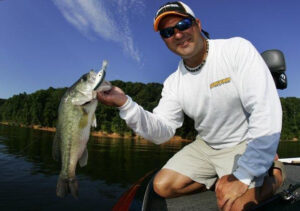 I spent a day or two with Ben Parker about 6 years ago and he showed me the basics of how he found schools of bass on Kentucky Lake with Side Imaging. To say I learned a lot would be an understatement.

Since that time I’ve spent literally thousands of hours idling and staring at my electronics. I’ve learned that tweaking your units to get the best picture at all times makes that time spent finding bass much more enjoyable and efficient. â€”Jason 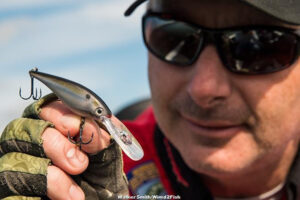 I’ve always valued the thoughts and opinions of Mark Menendez. I think very highly of him and he’s one of the most knowledgeable and cerebral bass anglers I’ve ever known. In a conversation about crankbaits, he talked to me at length about the importance of hard color contrasts. So of course, I was all ears.

He spoke of how he’ll often sift through dozens of the same crankbait models until he finds one with a hard-line color contrast between the back and sides of the lure. You might buy 4 identical crankbaits off of the same rack at your local tackle store, but they all have slightly different color variations. Throughout the manufacturing process, some lures will get different amounts of colors than others.

I’ve started paying much more attention to this since our conversation and I’ll admitâ€”it has made a noticeable difference in my catch rate, especially in stained and dirty water situations. The quick flash of that stark color contrast seems to be a major triggering mechanism for otherwise lethargic bass. –Walker

Fish deep earlier than other anglers 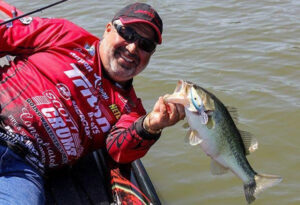 Not all bass in a fishery do everything the same. They don’t spawn at the same time, they don’t move shallow at the same time and often it’s long before we “think” they should be doing certain things.

We’ve all heard big fish spawn early. I’m sure that’s true. And because of what I learned from Jaime Horton, I’ve found that they will start grouping up offshore earlier than many people think. Looking for them deep earlier than usual in the post-spawn period has led me to some really big catches. â€”Jason 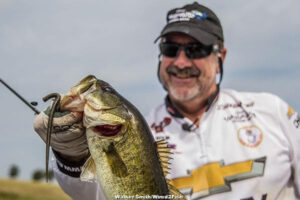 I went through an incredibly frustrating stretch on my home lake this past winter. I share a lot of specific fishing information with a few very close friends around the lake, and they couldn’t quit talking about the incredible jig bite that was happening. These guys were talking about 40 and 50 fish days in the dead of winter. They didn’t have to twist my armâ€”I was all over it. I spent a bunch of afternoons searching desperately for this magical bite.

A few days later, I had one of those rare lightbulb moments as I flashed back to an interview I conducted with Larry Nixon. He believes that an angler’s particular bait choice or color doesn’t always matter as much as we think. Instead, he puts more emphasis on his bait’s fall rate. Fish can get really picky, especially in the winter, and the difference between a 1/4-ounce jig and a 3/8-ounce jig can be huge.

I went out a few days later and wrecked ’em on a small 1/4-ounce flipping jig and, sure enough, that’s what my buddies had been using. So before I write off a good flipping bite, now I always make sure to change my weight size and give it a fair shot. â€”Walker

Land your jig on top of something when fishing laydowns 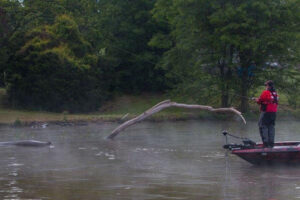 I might not be able to drop shot to save my life and I sure as heck can’t fish a vertical jigging spoon in 40 feet of water. But I can put a jig where it needs to go.

Or so I thought.

Dave Lefebre shared a little secret with me in regards to fishing laydowns. Instead of aiming for the water right next to the limbs or trunk, lightly land your jig on top of the actual laydown and slide it into the water. I’ll admit that it was tough to break an old habit, but man, I’m telling youâ€”it works.

Now I don’t always do this because I still believe that the sound of a jig skipping on the surface can draw the attention of nearby bass, but when it’s super tough and I’m fishing post-frontal conditions, Lefebre’s technique has absolutely helped me put more fish in the boat.

I’ve also been using this technique a lot when I’m frog fishing. I’ll cast the frog on top of a seawall or onto dry land and slowly pull it into the water. This does two thingsâ€”it virtually eliminates any splash and also makes it seem as if a frog is jumping into the water from dry land. â€”Walker

The next time you find yourself struggling for a bite, think back to some of these memorable fishing tips from some of the world’s best professional anglers. They’ve worked for us and they might open up a whole new dimension of your fishing game.