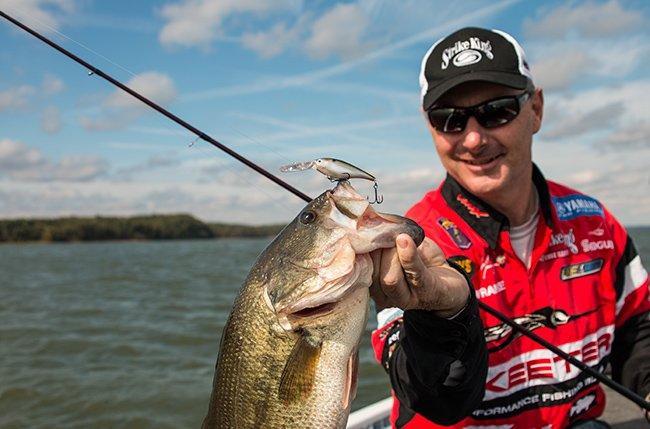 Just as a mechanic uses certain tools for various jobs, it’s important to choose a crankbait that’s most suitable for a given scenario. According to Elite Series pro Mark Menendez, there are several factors that should contribute to your crankbait selection process this fall.

Before we delve into the more specific facets of his decision making, make note of your fishery’s water temperature. This will help you understand the first and most basic part of this procedure.

When the shad begin flooding the creeks, squarebill crankbaits can be a very powerful weapon for bass anglers of all skill levels. The bass aren’t dumb and they’ve been through this process a time or two, so they’ll often inhabit shallow cover along the major migration routes. This cover of course offers them the perceived safety they crave, but more importantly it acts as major ambush points that aid in opportunistic feeding.

“You can do some very special things with squarebills,” Menendez said. “Unlike round-billed crankbaits, they allow you to crash into and collide with cover with a very low number of hang-ups. This added efficiency allows you to cover water at an alarming rate and put your plug in front of as many fish as possible.”

Due to its square-shaped bill and its ability to deflect well off of cover, it’s tempting to turn your reel handle as quickly as possible with reckless abandon. But if you can be a bit more patient and make yourself slow down, you’ll notice a dramatic increase in bites.

“When I hit that piece of cover, I always stop the lure to let it rise above the obstruction a bit,” Menendez said. “But before I continue my retrieve, I’ll make very short cranks of the reel, essentially turning the squarebill into an impromptu jerkbait. It keeps the lure in the optimal strike zone much longer and the fish absolutely cannot stand it.”

“Crankbait fishing can be absolutely incredible this time of year. You can catch amazing numbers while also appealing to really big bass, too.”

Buoyancy— “It’s essential for a squarebill to have a lot of buoyancy so it deflects well,” Menendez said. “In the fall, I’ve always had a romantic love affair with homemade balsa baits but they just don’t last. You pay $12 to $30 for one plug that lasts two trips and that’s hard to afford. With today’s technology, plastic squarebills have most of the attributes of balsa lures with more durability.”

Paint— It’s safe to say that Menendez is a bit picky when it comes to his crankbaits’ paint jobs. He’ll often sift through dozens of lures until he finds one with a very hard-line, distinct color contrast between the back and sides of the bait. As the bait rolls on its side, the stark contrast flashes, acting as a major trigger mechanism for bass. He makes an effort to avoid “soft” color changes when chunking squarebills.

Balance— “A squarebill’s posture in the water is something you should never overlook,” Menendez said. “When I twitch that lure and it rolls to its side, I want it to roll back to its neutral position so the hooks are on the bottom and ready to go. This is why I use a lot of silent squarebills— I think a rattle can really throw the balance off if you’re not careful.”

Forage size— Paying close attention to the size of available forage can make an enormous difference throughout the fall. In most cases, Menendez chooses the Strike King KVD 1.5 Squarebill but if he’s noticing a lot of big gizzard shad in the area, he’ll upsize to the Strike King KVD 8.0 Magnum Squarebill. 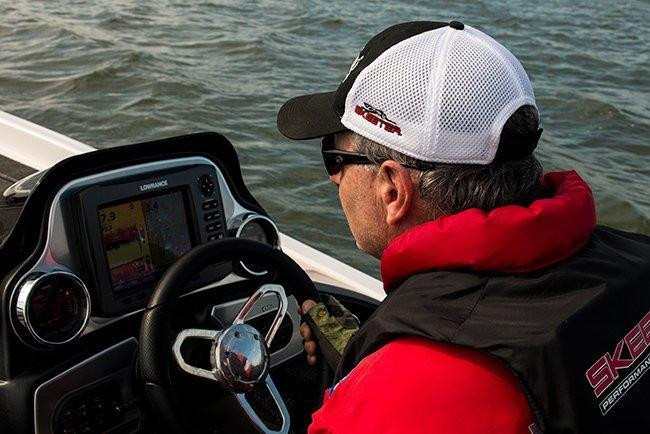 As the water temperature drops and begins flirting with that 55-degree mark, anglers can become a bit spoiled by the hot fishing action of recent weeks. Make no mistake about it, though— the bass are certainly still feeding and the shad haven’t gone far. Sometimes all it takes is a change in strategy and, of course, a different crankbait.

“In this water temperature range, it’s not at all uncommon for the bankfish to move off the bank,” Menendez said. “It doesn’t mean they’ve vanished, but they’re just not relating to the easily seen stuff we’re used to. They’ll gather in the middle of coves in the small, natural contours between each side of the bank. It doesn’t have to be a defined creek channel, either. Just some sort of depression is all it takes.”

Bass are fairly gluttonous creatures, so their movements during this time frame aren’t hard to decipher. They, too, will be relating to these subtle contours with one thing on their minds— dinner time. And a well-placed medium-diving crankbait is a perfect meal.

Straight-lined bills— “When I’m targeting the 5 to 9-foot depth range, I want a crankbait whose thumb-shaped bill protrudes from the chin of the bait at a straight line,” Menendez said. “I’ve always had a lot of success with the Strike King Series 3 Crankbait because that rounded bill deflects very well off of rock, which is a primary target of mine when the temperatures start to drop.”

Angled bills—When the water temperatures drop into the mid to high 50-degree range or the clarity decreases, Menendez tends to transition to medium-divers with slightly angled bills such as a Strike King Series 4 Crankbait. This produces a much wider wiggle that pushes more water and helps the bass “find” the crankbait easier.

Mix your color tones— “The deeper your crankbait is in the water column, the more the light wavelength changes,” Menendez said. “Fluorescent colors stay the same, but primary colors change. So when you reach that 12-foot range, crankbaits with blues, greens and purples hold their original color much better.” 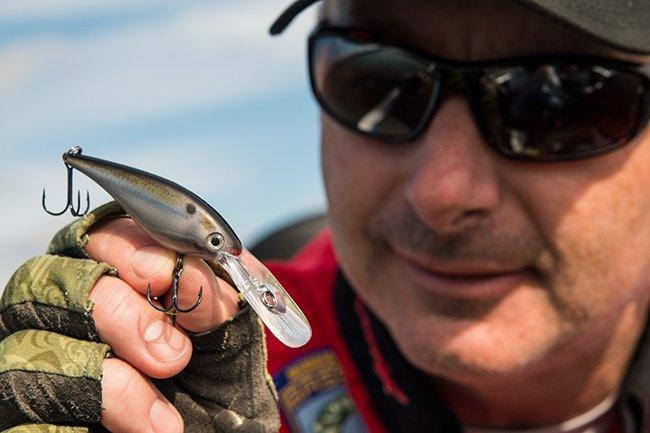 If it looks nasty, cold and blustery outside your window throughout the late fall, you might want to sneak away for a few hours and head to the lake. Although it might be uncomfortable—and at times, bordering on the edge of insanity—these days can make for some incredible fishing with finesse crankbaits.

“Given the choice, I’ll power fish in the fall months because the fish are scattered and it just makes more sense,” Menendez said. “But—and that’s a big ‘but’—when it gets colder, finesse crankbaits like the Strike King Lucky Shad become hugely important.”

Coldwater bass are largely sight-oriented feeders, which is why it’s so important to find clear water in the late fall. If you were to chunk a big squarebill or some other round-bodied crankbait in this situation, there’s a good chance of spooking the fish before they even think about eating it. Finesse crankbaits, however, have a very tight wiggle which looks incredibly natural.

“As water temperatures decrease, anglers need to be very cognizant of their retrieve speed. I suggest a 5.1:1 gear ratio reel and only spool it to 3/4 its capacity. This will make the reel even slower, which is certainly a good thing.”

Elongated shape— “Shad don’t wobble very much when they swim,” Menendez said. “They have a very clean, crisp movement through the water. When you add cold water to the equation, this subtle behavior is amplified tenfold. The longer a lure is, the less it will wobble so it’s important to use a long and lean crankbait in cold, clear water. It’s very non-threatening and although it’s small, big bass will jump all over it.”

Natural colors— Ever caught a bass in really cold water? If so, you’ll notice they’re very pale. Beginning in the late fall, the same thing will happen to shad and their color will become much duller and more muted. This is why Menendez prefers using very subtle colors in these situations. In cloudy conditions, white-bodied crankbaits will produce a better flash while shinier, silver and chrome-colored crankbaits attract more attention in sunny conditions.

Downsize your line— “The colder it gets, the lighter line I tend to use,” Menendez said. “I use 6 or 8-pound Seaguar InvizX most of the time because I want that little crankbait to get as deep as it possibly can. Coldwater bass don’t pull very hard, so I never had any issues with line breakage. I’ll also stay away from braided main line because the lack of stretch has a negative impact on the crankbait’s action and it will make the lure move too fast through the water.”

This time of year is very special for bass anglers. We can finally enjoy some cool weather but most importantly, the days of slow fishing action are over. If you haven’t done so yet, grab a squarebill, medium-diver and finesse crankbait and head to the lake to capitalize on some excellent opportunities. If you follow these selection tips, you’ll notice a big difference in your success.