There are two types of people according to comedian Eddie Izzard, those that have techno-joy and those that have techno-fear. His joke is that you are either terrified of screwing something up on an electronic device or you think it will totally improve your way of living and tackle it fearlessly right out of the box without reading the instructions.

At Wired2Fish, we definitely fall under the former label but understand a lot of guys and gals that fish are of the latter, especially when it comes to your boat’s electronics. The truth of the matter is almost every great unit has this great setting called reset to factory defaults. That means no matter how bad you think you’ve screwed your graph up, you can always reset it back to how it was when you got it out of the box.

But for those that want to alleviate some fear, especially with a new technology like Side Imaging or Side Scan, there are lots of folks who have already been down the path you are about to head. So rest easy knowing that other folks have taken a lot of the guess work out of the new technologies.

Take Ben Parker of Springville, Tenn., for example. You might have heard his name last month when he and his partner won the Triton Owners’ Two-Day Tournament on Kentucky Lake with more than 51 pounds of bass or when he won the Bassmaster Federation Nation Tennessee State Championship on Pickwick Lake earlier this year. Now he sets his sights and his prowess with the Humminbird Side Imaging technology on the Bassmaster Northern Opens.

We picked his brain recently on Kentucky Lake about side finding and electronics in general, and the information will help any angler use their tools better.

“It’s all about giving people a perspective,” Parker said. “I actually offer guided trips now where we don’t really fish. We just spend 3-4 hours teaching a client how to understand and tweak their side finders to be able to effectively interpret what they see on the screen. Any longer than that and people start to forget all the technical details they’ve learned.”

Right out of the ramp he pulled up his Side Imaging on one of his two Humminbird 1197c SI units and pointed to something on the bottom of the lake.

“What do you think that is and how big is it?” Parker asked. “I don’t know; a piece of concrete dock, maybe 10 feet by 10 feet,” I said. “It’s one of those concrete blocks over there that the Coast Guard uses to keep buoys in place.” The block was 2 feet by 1 foot at most and easily illustrated his point that you need to have a perspective when you’re looking at your side finder.

A common mistake anglers with new side finding units make is scanning too far from one side to the other. They will set it to 200 feet to the left and 200 feet to the right. Parker pointed to the screen when it was set like that illustrating that a bass would be smaller than a grain of sand on Side Imaging.

Instead Parker sets his graph to 40 feet out either side. Other ranges might work better on certain fisheries, but for how he fishes on Kentucky Lake offshore, that’s the magic range for him. But that didn’t automatically start making bass magically appear for him either.

“I had one of the first side imaging units that came out,” Parker said. “The day they came out I was in line to get one. After that I spent thousands of hours idling and looking at that screen. People probably thought I was crazy because I was just idling and staring at this big screen in my boat and never looking up.”

Parker was relentless in his pursuit of understanding how the graph worked. He’d occasionally call Humminbird support but for the most part, he was learning on the fly with no help from anyone. That took about three years and is what he really shaves off the learning curve with his guide trips.

One thing that many anglers don’t do that cut Parker’s learning curve in half was idling over bass while he had them located and was catching them. If he located a school on a ledge and was catching them every cast, he’d pull the trolling motor and drive over them with his side finder to see exactly how they looked on his Side Imaging.

Then as he saw that same scenario on his screen, he’d stop and fish them and have confidence he had found a school of bass.

“What people don’t realize is when you have a lot of current, the bass will put their chin on the bottom and all line up like little soldiers facing into the current,” Parker said. “So if you drive over them east to west when they are facing north to south you only see a tiny blip as you cross over their back. But if you scan over them north to south you see them as long signatures on your side finder as you go over the top of them. So how you drive with side finders is important too.”

What Parker also emphasizes with Side Imaging is finding fish that are in a catchable position. Anglers get spun out by all the cover, arches and blobs of fish they see on their side images. But if the fish are 8-10 feet off the bottom, they usually aren’t catchable bass. Parker finds that a bass that is within 2 feet of the bottom is always catchable.

“People talk about timing the feeding fish on ledges,” Parker said. “But I’ve driven over schools of bass three or four times in one day. And each time they are positioned differently. But anytime that they are close to the bottom I can catch them, whether they are truly up there feeding or not.”

More than half of Parker’s electronics clients have been crappie anglers. They want to be able to find cribs, stake beds, brush piles and more crappie holding cover. Parker proved the effectiveness of finding crappie with side finders on a recent outing. 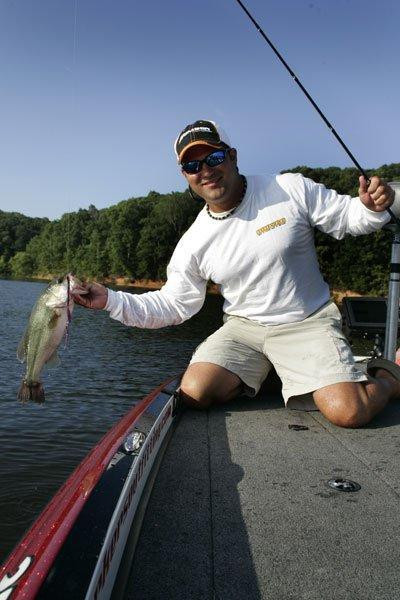 A friend asked him to come troll roadrunners on ledges for crappie, a popular technique on the Tennessee River this time of year. They fished that day and Parker finally asked his buddy what the fish were holding on. His buddy said they were on brush and stumps. Parker was puzzled why they didn’t just target the stumps on the ledge with which he was very familiar.

The next day, they hopped in his boat, and he used his side finder to mark the stumps. Then they lined up and made several casts at the stumps.

“Anytime you felt your jig start pulling up on a stump and popped it off, a big crappie just slammed it.”

“I get lots of questions about side imaging units,” Parker said. “I don’t have all the answers but I feel like I’ve figured a lot of things out that others haven’t. If a guy is going to spend $1,000 to $3,000 to outfit his boat with electronics, why wouldn’t he spend $300 to know exactly how to use it? More than half my electronics trips are in the clients’ boats because they want to learn their electronics. I’m happy to take my boat, but most would rather learn their own units.”