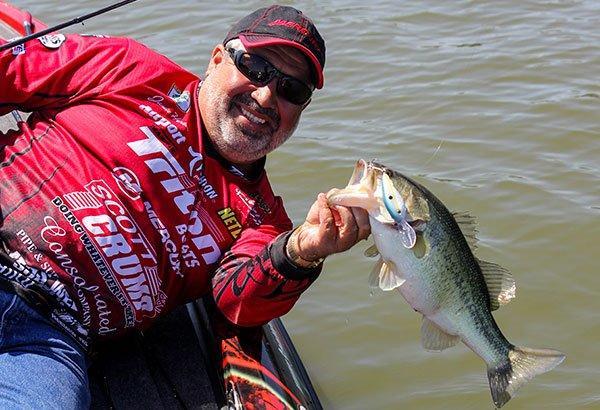 If you’re like me, you grew up beating the bank with spinnerbaits, crankbaits and worms. The thought of fishing deep never really entered my mind until winter most of the time. I just thought if there was stuff shallow, that’s where I’d find a bass. Truth be told that’s not irrational thought, but it’s a little narrow sighted. Fact is there is “stuff” deep too.

We didn’t have fancy side imaging or gps. We had to just fish spots from memory and finding something off the bank was a lot more luck than strategy. Sure I caught fish deep at some point in my youth but it seemed a whole lot easier to just stay on the bank and fish.

Now with the introduction of GPS, Side Scan, Down Scan, contour mapping chips, waypoints, Structure Maps and more, fishing deep has gotten a whole lot easier and savvy anglers have found that it’s a way to load the boat much faster once you find a school of bass grouped up away from the bank staging, feeding or otherwise congregating.

But the key in recent years on a lot of pressured fisheries can be moving out early with the first wave of  fish. And this is where a few key points can be made about why bass appear to leave the shallows earlier than a lot of anglers think. Here are just four reasons we came up with why you should start looking for deep fishing spots earlier:

I spent some time filming with Casey Martin and Jamie Horton on Lake Guntersville recently, and they both looked for spots off the bank and away from shallow water even though it was late April and most folks would say the spawn was in full swing on the lake. At first I thought it was a little silly, until both Martin and Horton whacked some nice bass on both of their first stops offshore. Point taken.

“I’ve had a 30-pound-plus limit in a tournament fishing a crankbait deep offshore the first week of April,” Horton said. “I always look both deep and shallow when I’m preparing for a tournament in the spring. I know some bass move up, spawn and move out earlier than the rest, and if you can be the guy to find them first, you can really do something impressive in a tournament.”

“It seems like on good lakes, especially ones like you have on the TVA, if you want to get beat in a tournament, just go into the bays,” Martin said. “If you want to win on good lakes like Guntersville, you need to be away from the bank in the spring. Finding those first active schools can be tough but really rewarding for your efforts.”

Both agree you can still get lucky and win shallow if you get enough big bites, but they always spend time looking both shallow and deep to fish more thoroughly for bass in all three stages of the spawn. 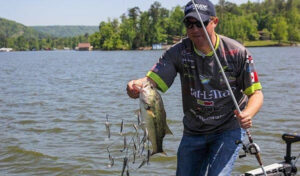 Both Horton and Martin did some damage with deep crankbaits, namely the Strike King 5XD and 6XDcrankbaits, on our trip to Guntersville. Like we’ve all heard before and those of us that live on ledge lakes preach, you’re just trying to trigger the school into starting a feeding cycle. A deep-diving crankbait can be very effective for doing that.

Martin did a lot of damage with a Picasso Bait Ball umbrella rig on an early ledge spot recently. The umbrella rig has a lot of controversy swirling around it, but Martin has been forced to learn all he can about it because the tournaments he fishes allows it and he has spent a lot of time figuring out how to use it to trigger schools with a fast retrieve with occasional stops.

A big single swimbait can be a good bait to catch some of those early post-spawn females as well we’ve found. Big worms, football jigs, flutter spoons and other deep water staples can all have their place at times to get a school going or to keep fishing biting when they quit biting another style bass lure. 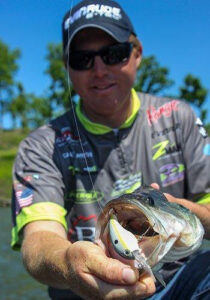 Where to look deep first

“It sounds redundant but you’re looking for the first deep holding spots coming out of the spawning bays and flats,” Horton said. “I like finding those long points with some creek channels close to them on the way out of the major spawning bays. And, the best part of those type spots is when you find the fish loaded on one of those type spots, their usually on several other similar spots.”

A creek channel that intersects a tapering point toward the mouth of a bay or just out of the bay into the main lake can be a textbook spot to find those early deep bass. Deep is relative of course. Those fish might be up on the last bit of the point near the channel or they may be way up on the point. But they are usually deeper than they were weeks earlier while spawning.

As they leave those bay areas, they work out to the main lake features like humps, main lake points, river channel ledges, deep flats off the ledges and other main lake features where they can relate to structure and run baitfish up on hard bottoms.

Scanning for spots and fishing deep has become a lot more prevalent in the last decade, so getting a jump on those early fish sliding out deep before the big wave of bass does can often be very rewarding, even during the post-spawn period where folks often say bass fishing is the toughest. Some of Horton’s best days have been fishing this way while others were still sight fishing and flipping shallow cover. It won’t always pan out, but when it does, it’s some of the most fun fishing you’ll find. 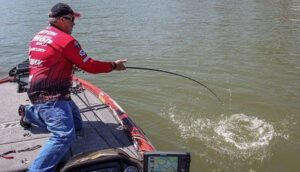