The past decade has brought flutter spoons to the forefront of the bass fishing community. Although these relatively mundane-looking lures have since held a special place in the tackle arsenals of top professionals, they are often dismissed by a large majority of recreational anglers—especially this time of year.

While these shoehorn-shaped metal slabs have been responsible for giant limits of bass throughout the country, they rarely receive any consideration during the late-winter and early spring months. They work wonders on deep bass in the doldrums of summer, so why don’t they work right now?

They actually do, according to Bassmaster Elite Series pro Mark Davis—and he’s not talking about small fish, either. This technique will give you an opportunity to catch some of the biggest, nastiest bass of the entire year as they prepare for their annual shallow-water spawning odyssey.

In order to take advantage of this little-known deep-water bite, Davis believes it’s critical to understand a few key concepts that will drastically shorten your learning curve. 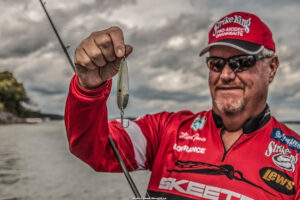 “Downsize your baits in cold water.”

How many times have you heard that advice in the winter? Too many times to count, most likely. It has been relentlessly drilled into our skulls since we learned how to bass fish. Although this old saying does hold a bit of truth in certain situations, it’s not the case right now.

“Most anglers share a very similar mindset and rarely stray from it,” Davis said. “Everyone thinks you have to downsize your bait selection when the water is cold. But these big prespawn females are filling their bellies in order to prepare themselves for the rigors of the upcoming spawn. The flutter spoon is a great way to capitalize on this feeding behavior because it’s a big, easy target with a rather slow, lazy fall. They don’t have to burn a lot of energy to eat it.”

Before you start daydreaming of endless 5-pounders, raw palms and slime-covered hands, it’s important to realize that this bite can be quite situational. It’s not going to happen every day on each fishery, but there’s a key ingredient that will drastically increase your chances of success.

All bass are different

When the water temperatures reach the magical mid 40 to mid 50-degree range, prespawn bass have just one thing on their minds—they’re ready to head to the shallows and enjoy a little romance. But much like humans, each bass has its own individual personality and preferences. Some jump at the first chance to head shallow while the “late bloomers” take their sweet time.

These late bloomers are absolute suckers for a flutter spoon.

“If you get a few days of warmer weather and comfortable, above-freezing nights this time of year, some of the bass will move into very shallow water,” Davis said. “But that throws a lot of folks off because those fish only represent a small segment of the population. There will be plenty of fish that hang out in deeper water for two to three weeks longer.”

Although these warming trends may not be enough to spur a lake-wide shallow migration, the more favorable weather will certainly have a gigantic effect on the feeding behavior of deep bass. It will often ignite a feeding frenzy and while many anglers are lured to the shallows by the temptation of “easier” shallow bass, you can put a flutter spoon in your hand and have the deeper and more aggressive fish all to yourself.

Do I drag, hop or vertically jig a flutter spoon?

Something about a big, meaty hunk of metal can tempt anglers to over-fish the flutter spoon in the late-winter and early spring. Instead of making emphatic rod jerks, booming casts and huge hooksets like we’re accustomed to seeing in televised summertime tournaments, Davis kicks it down a few notches and utilizes a much more methodical approach.

As with any bass fishing technique, it’s essential to analyze a given fishery and recognize high-percentage areas. Throughout Davis’ storied career and after thousands of flutter spoon catches, he has noticed one common denominator when searching for productive water.

It’s all about the deep structure adjacent to potential spawning grounds.

Fishing a flutter spoon for early prespawners requires a much different mindset than many anglers are used to. There are certainly other techniques that will catch more fish, but that’s not the name of this game. You’re looking for quality—not quantity—so always remain patient and confident.

It’s hard work but in this case, the challenge is directly proportional to the reward.

Be prepared for a big bite:

“When you’re learning to fish a flutter spoon in colder water, it’s hugely advantageous to experiment when you know you’re around biting fish,” Davis said. “I know that sounds obvious, but so many times we’ll try everything in our tackle box without any success and then start tinkering with a new technique. That’s backwards. If you’ve already established the fish aren’t biting, don’t ruin your confidence with an unfamiliar lure. You have to be around bass in order to make it work.”

If you’re looking for a way to specifically target larger, unpressured bass, grab a few flutter spoons and spend a few days utilizing these tips. If you can find the right forage, understand the tendencies of early prespawn bass and locate a few likely staging areas, you might find yourself with a big grin and some unforgettable memories.