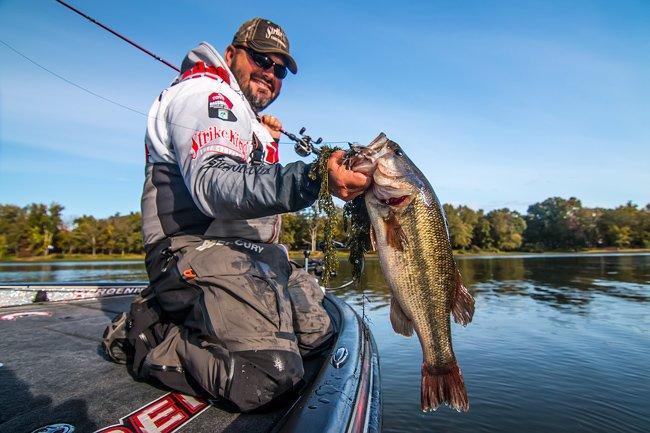 “Most guys set the hook wrong!”

We spend a lot of time in a boat fishing, much of that time with guys who make their living fishing whether that’s fishing on a professional bass fishing tournament trail or guiding fishing clients on a local lake 350 days a year. These guys have had more than the average angler’s opportunity to learn from mistakes. So we pick their brains, mining for a few nuggets of information we didn’t already know.

But I often ask guys one question over and over regardless of what subject we’re discussing.

“What do you see most anglers doing wrong?”

That question more than any other gets a lot of good responses but I don’t ask it so they can poke fun. I ask it because if we at Wired2Fish can identify the common mistakes and not-so-common ones as well, we can make you a better angler in all facets of the game.

One topic that has come up a lot this year is hooksets. I spent the majority of this year testing some theories on hooksets that I’ve gotten from a myriad of anglers from all over the country.  Let me tell you, it’s tough to play with hooksets when the fish are biting and you run the risk of losing them because you’re “trying something different” on them.

But more professional anglers notes that your weekend and beginning anglers set the hook poorly and it results in more lost fish. Which if you’ve fished much at all, there’s really nothing worse than losing or breaking off a fish. But we’ve been given some great advice on how to overcome this shortcoming.

Slack. That is the biggest culprit on a bad hookset. It took one angler changing his thinking over the years and losing a bunch of fish to finally figure out that constant tension is more important than jarring hooksets.

“I call it snap setting,” said Greg Hackney, Strike King and Bassmaster Elite Series pro and noted big bass in the thick stuff expert. “We’ve all done it and we’ve all seen other guys do it. The fish bites. What’s the guy do? He drops his rod tip and then starts winding a little a bit and then cracks back as hard as he can. Then the fish fights, jumps and gets off. And you’re left wondering how anyone could set the hook any harder.”

It was actually a practice phenomenon that led Hackney to a realization about good hookset form.  He was losing some fish in a tournament and couldn’t explain what it was. Was his hook flexing? Was his he just missing the timing on the hookset? Was he setting it too hard? Or maybe to soft?

The next tournament he was practicing and a fish bit and he started shaking his rod trying to get the fish to let loose as he didn’t need to stick him now and wanted to save the fish for the tournament. The fish pulled and bent his rod and never let go. Nothing but straight tension on the line and the fish wasn’t letting go.

The next fish and the same scenario unfolded all over again. Then it dawned on him. In practice, he can’t get the fish to let go, no matter how much he pulls on the line. Yet come tournament time, he sets the hook hard enough to drive a nail into a plank of wood and still loses the fish.

Simultaneously he was working on a new line of heavy cover hooks and lures with Strike King that featured hooks that absolutely would not flex.

Now the two ideas have melded into a lockdown approach to setting the hook.

“When a fish bites a lure, say a jig, and you rare down and use that drop the rod and rapid explosive hookset, I believe a lot of times you’re popping the fishing mouth open because there is a bit of slack in the line and the lure all the sudden pops to the front,” Hackney said.

What Hackney has found, that when a fish bites his jig, he mentally slows himself down and starts reeling into the fish. As he does he brings his rod towards the fish reeling until he feels the pressure start. Sometimes his rod even begins to bend at the tip. As the pressure begins, then he starts sweeping his rod back in what he calls “leaning into them.”

“I just reel and lean into them and I feel like the pressure and the sharp points on these new Heavy Cover hooks and the fact they won’t flex means it’s coming up and forward until it finds something to bury into. With hooks that flex, you will find the hooks sometimes scratch and grab but don’t really penetrate because they lost their piercing angle as they flex.”

Now Hackney said he’s hooking and landing nearly every bass that bites and has never felt more confident about his mechanics and his equipment.  Rather than popping the fish’s mouth open he’s getting penetration in the mouth and jaw of the fish like never before.

This really stuck with me because I had come to a similar revelation with drop shotting years ago. When you dropshot in clear Ozark Lakes like Table Rock, Beaver and Bull Shoals, you do a lot of vertical fishing, catching fish you see on your graph. I was really good at finding and catching suspending bass in the top of deep standing timber, but I was only hooking and landing them sporadically.

I thought I had to be a rocket reaction hookset guy to get those deep fish up and out of the trees. So at the first little tick or pressure I’d jerk upward. And I’d land some bass. But I started forcing myself to slow my reaction and just reel and raise my rod tip up high as I reel into them. The line goes so tight it slips the drag. That’s when I’m sure they are stuck. My fishing partners still are blown away at how hard I pull on a drop shot fish with 6-pound line. But you know your hooks, you know your line and you know your drag. If you have confidence in all that, then it works just about every time.

That’s where Hackney is at. He’s got confidence in his rods and reels, his line and his new line-up of Heavy Cover hooks and lures from Strike King that when he reels down and puts pressure on a fish and then leans into them, he’s going to have them stuck every time.

Obviously there will always be exceptions. Sometimes you need to let them eat a 12-inch worm a bit longer and you’ve got to give them slack so they can. Sometimes on a frog bite, you may not want them to bury up in the grass while you wind down on them. So it definitely is something that each angler has to figure out for themselves. But I’ve hooked and landed more quality bass this year than in many years in the past and I think a lot of it has to do with the slow down and lean into them approach with good equipment and sharp hooks.

How do you set the hook? Would take the time to experiment and change your technique if you thought it would help you land more bass when fishing different situations on the water?