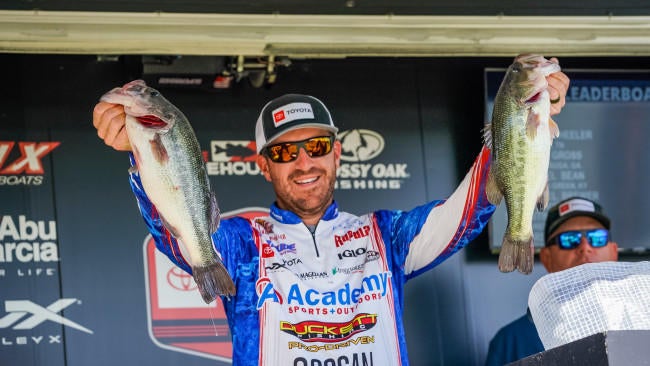 “I truthfully can’t even believe that just happened,” said Wheeler, the reigning MLF World Champion who earned the first Toyota Series win of his career. “I’ve competed at all levels, and it is so tough to win one of these Toyota Series events. A lot of pros compete in them, but they also have the great local fisherman that know their home bodies of water so well. They’re extremely hard to win, so to come out today with the victory â€“ I am tremendously tickled.”

Wheeler said that he had no magic spot on Pickwick Lake, but estimated he fished around 30 different places throughout the week, throwing a variety of baits.

“I tried to find little 3- to 5-fish schools that were a little out of the way off the beaten path, and then when a community hole opened up I’d stop in there and try to catch a few fish. I caught fish from 10 feet to 30 feet, and I was constantly changing my baits based on where I was fishing,” Wheeler said.

Wheeler said that his key baits this week were a Rapala DT20 crankbait (Caribbean Shad), a Texas-rigged Googan Baits Mondo Worm and a 6-inch Lunker Log stick bait, and an Accent Ol’ Big Spinnerbait. He also mixed in some other baits, including a scrounger and a swimbait.

“My electronics setup was a huge deal for me this week, as well,” Wheeler went on to say. “Instead of signing with one company, I’m running Lowrance, Garmin and Humminbird units this year and that really helped me tremendously when I was finding those 3 to 5 fish schools.”

Seth Davis of Harrison, Tennessee, took home an extra $1,000 as the highest finishing FLW PHOENIX BONUS member. Boaters are eligible to win up to an extra $35,000 per event in each Toyota Series tournament if all requirements are met. More information on the FLW PHOENIX BONUS contingency program can be found at PhoenixBassBoats.com.

Washam brought an 8-pound, 9-ounce largemouth bass to the scale Friday â€“ the largest fish weighed by a boater in the event â€“ to earn the day’s Big Bass award of $141.

Josh Lockard of Somerset, Kentucky, won the Co-angler Division Saturday with a three-day total of 15 bass weighing 48 pounds, 7 ounces. For his win, Lockard took home the top prize package of a new Phoenix 518 Pro bass boat with a 115-horsepower outboard motor, worth $33,500.

Quaintance weighed in the largest bass in the co-angler division on Thursday, bringing a 7-pound, 3-ounce bass to the stage. He earned the days Co-angler Big Bass award of $95.