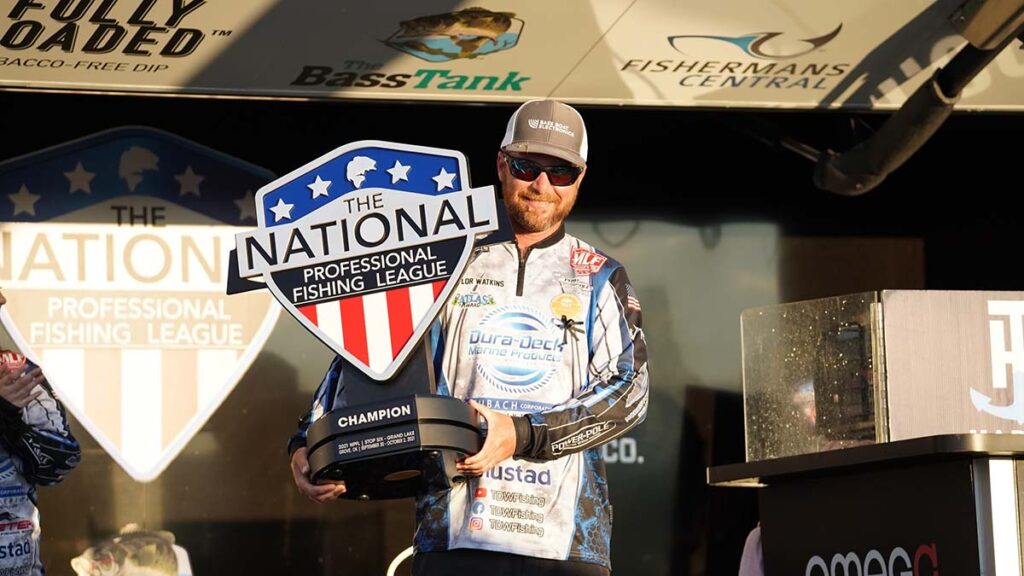 GROVE, Oklahoma – With his biggest bag of the week on the final day, Taylor Watkins added 17-pounds, 10-ounces to finish with a total weight of 50-pounds, 3-ounces to take the victory at Grand Lake. While planning on a topwater bite for the event, Watkins evolved a jig pattern to catch his fish and give him his first NPFL victory.

“It was awesome, it pretty well went to plan. This morning I went where I have been starting and lost a 3-pounder that ended up not costing me, but it would have culled a pound or more. As soon as I got to my docks this morning the storm hit, and I had to take cover. When the storm passed, I fished both of those docks and never got bit.”

After not getting bit, Watkins picked up a buzzbait and picked up a few fish. After jumping around on his way back to Wolf Creek, Watkins got to work with his jig to finish out his day.

“I figured out there five docks close by to the take-off that held fish and I cycled through those three times and caught some each time. I knew the weather would change things, but it didn’t play out at all like I thought. The topwater bite never materialized but I figure out the jig deal and went with it. Big thanks to Mustad Hooks, Tuff Line, and the jig was a True South Custom Lures.”

Grove, Oklahoma angler Sheldon Collings added 13-pounds, 3-ounces to his total for a total weight of 48-pounds, 11-ounces to finish in 2nd place. Leading after two days on Grand Lake, Collings fished a mixture of docks and offshore brush and rock piles to catch his fish this week.

Adding 15-pounds, 2-ounces on the final day, Bryant Smith finished the event in the 3rd spot with a three-day total of 45-pounds, 13-ounces. The Roseville, California angler relied on a topwater and flipping bite on shallow flat banks with isolated timber to catch his fish.

With 12-pounds, 7-ounces on the final day, James Biggs finished in 4th place with a grand total of 42-pounds, 14-ounces. With the slowest day of the tournament on day three, Biggs weighed in a five bass limit every day to accomplish his goal of making the NPFL championship.

“Today was horrible. When my camera guy got out of the boat around 1 pm, I had two little fish. I went to a rock pile and caught two quick, turned around, threw a crankbait up on the bank and caught my 5th fish.”

The goal all season was to make the championship. Biggs knew Grand Lake would be his best lake and was happy to have it at the end of the season.

“I can’t wait for Nickajack, I have some history there. Outside of Pickwick, I finished in the top 40’s everywhere, just had a couple bad ones, so it was nice to rebound here this week. My in-laws followed me around today, all day, the watched me not catch fish for several hours.”

“I started this morning and caught 12-pounds and then went deep to try and cull. I had two bites, one small and one big one, and I broke the big one off.”

With a tough year on the NPFL trail, the Bartlesville, Oklahoma angler is happy to have a good finish on his home body of water but had this one penciled on his calendar all year.

“Its Grand Lake, I wanted to win, man. I had a rough season, one of the roughest I can remember as a pro, but I am definitely glad to finish on a good note.”