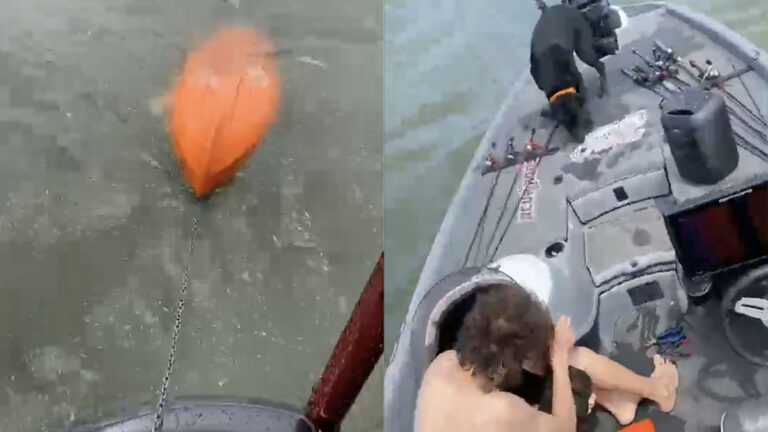 Coleton Jennings is one of the younger tackle company owners in the recreational fishing industry. He owns Jenko Fishing and started it with the help of his dad when he was just 18 years old. Jennings has had a lot of success in his fishing business and as a high school tournament angler. He won the Boat US High School National Championship on Pickwick years back. He’s spent a lot of time on the Tennessee River, but he had one of the scariest outings of his life on Saturday on Kentucky Lake.

While out fishing and graphing some offshore places on the Kentucky end of Kentucky Lake, Jennings was a good ways offshore idling and marking stumps on a ledge when he heard a faint noise that sounded like a voice. He looked around, but with a 25 mph wind and rollers coming down the lake, he didn’t see anything immediately. Then a few moments later he heard the faint cry again. Way off in the distance he saw something orange in the water, so he started making his way over it to it. About 500 yards from the orange thing in the water he spotted a man barely able to keep his head above water. He raced over to him got ahold of him and told him to get in. The man was too weak to pull himself in, so Coleton grabbed him by his pants and rolled him into the boat.

Jennings whipped the boat around and headed to the orange spot in the water. When he got to it, he found a black lab chained to an overturned kayak that was barely floating just under the surface. The waves were pulling the kayak down, and the dog was struggling to stay above the surface. Jennings laid down in his boat and used his hands to guide himself to the dog. In one big motion, he was able to flip the dog over him and into the boat.

As soon as the dog hit the deck, it began puking up water. After a few minutes, the lab shook off. and both the dog and his owner were safe. Jennings secured the chain to the back of his boat and drug the kayak behind as he idled the party back to their campground.

“That’s as scared as I’ve ever been on the water,” Jennings said. “First I wasn’t sure I would be able to get him in because it was so rough, and then, the dog with a chain and kayak dragging it down was even tougher to get in. He told me he was trying to paddle across the lake. May not have been the best idea in 20-25 mph winds out of the south. There were 4-footers out there. I’m just glad I decided to go out there and look for some stumps. Normally I would be in a bay fishing shallow this time of year. He said he saw 10 boats go by and no one would stop. I told him no one is looking out in the middle of the lake when it’s rough. They are only looking right in front of their boat when they are driving.”

While kayaking and kayak fishing are great sports that we love as well. This could have ended horribly for this man and his dog. Don’t chain your animals to your kayak, and don’t go out in the middle of big waters on super windy days. Thankfully he had on a cheap PFD that kept his head above water between waves. Without that and Jennings assistance, this would have been a much different repot. Kudos to Jennings for being in the right spot and his quick action on the water! He certainly saved two lives.

EDITOR’S NOTE: Another Kayak angler drown this week in Nebraska. Please wear your PFD everytime you fish or paddle in a kayak. There is no telling what can happen in just a few seconds.