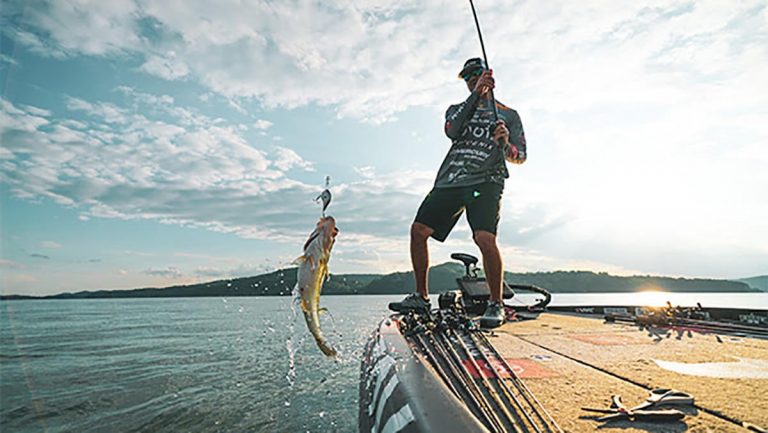 Elite Series competitor Gerald Swindle now fishes exclusively with 13 Fishing rods and reels. 13 Fishing’s unique combination of cool-factor and functionality attracted Swindle to sign with the brand. “First off, the rods and reels are lights-out,” says Swindle, Bassmaster Angler of the Year in 2004 and 2016. “But also, I like the 13 image â€“ it’s got a little swagger to it.

Noting Swindle’s “big personality,” 13 Fishing Marketing Director Ben Alcocer says Swindle “is a perfect fit” for the “bold” brand and that “his abilities on the water and his product insight really can’t be overstated.”

Swindle’s Bassmaster highlights, in addition to his AOY titles, include 18 Classic appearances and 55 Top 10 finishes.

Swindle praised 13 Fishing’s product line for including quality rods and reels in both high-end and economical categories.

“I’ve fished with the $125 to $150 rods, and they’re light for the dollar but just don’t break.” Swindle continues. I tell the guys at 13 that, and they laugh and say, ‘If Swindle can’t break ’em, no one can!’ If I can’t break ’em, you’re getting zero customer returns.”

Having purchased a minority stake in 13 Fishing’s parent company in 2019, Rapala VMC distributes 13 Fishing products outside the U.S.

Swindle is also a Rapala pro. His pro-team liaison at both Rapala and 13 Fishing is Dan Quinn, who wears marketing hats at both companies.

“Gerald is as good as they get and is one of the very best at catching bass, but just as importantly, he works just as hard off the water,” Quinn says. “Whether it’s filming, doing photo shoots, designing and testing products, his product knowledge and communication are top-level.”

“The fishing world better buckle up for this,” Quinn says. “It’s gonna be a fun ride!”

“We’re stripping it down to paint it and it’s going to be the same color as that reel,” Swindle says. “That’ how much I like that reel. It looks mean and elegant at the same time.”

LeAnn’s truck, a 1986 square-body Chevy with an LS1 Corvette motor, is undeniably cool. As are she and her fast-talking, quick-witted, square-brim-hatted, designer-jean-wearing husband, one of the Bassmaster Elite Series’ most popular â€“ and colorful â€“ characters. So it likely surprised no one when Swindle signed with 13 Fishing, angling’s coolest brand.

“13 Fishing is a stylish, cool brand, and that’s very appealing to me where I’m at in my career,” Swindle says. “With that image, it’s a lot easier to relate to people who are in their 20s, who are in college. They get into the brand. They like the way everything is ‘murdered out,’ as they call it. And that appeals to the people that I run around with.”

Swindle was impressed with 13’s Gen II Concept Z SLD reel’s performance the moment he picked it up.

“When I put that thing in my hand I knew this is where I want to be,” Swindle says. “If this brand is going in this direction, this fast, with this great of equipment, I want to be there.”

In addition to low-friction centrifugal braking, the Z SLD features 13’s innovative new SLIDE magnetic cast-control system, which is located in the perfect place for anglers to adjust without missing a single cast. You can use it to control casting downwind and then upwind on alternating casts with a flick of the thumb.

“That Slide’s legit,” Swindle says. “I mean, you turn into the wind, push it up â€“ and it steadies the cast.”

Additionally, the Z SLD features zero-corrosion CZB bearings and an advanced-polymer drag system within a rock-solid “Cast Iron Carbon” frame and side plates. And it looks cool â€“ SWINDEL-LEVEL COOL. “It’s got that swagger, it’s got that drip,” he says.

“When you put that reel on your rod, that combo’s got a lot of deck appeal,” Swindle explains. “When that rod and reel is laying on my front deck, I’ve seen people walk all the way across the parking lot and pick it up â€“ 20 rods laying there, and they’ll walk right to that one and pick it up. That’s the ‘drip’ â€“ that’s the deck appeal that draws people in.”

“The tip on those rods just felt right â€“ great for skipping a jig,” he says. “You don’t want a rod that’s too stiff. You’ve got to have a little tip to make an accurate cast. But you also gotta to have 80-percent backbone for when you get a big fish hooked up. That rod has that. When I picked it up, I said, ‘This is perfect.'”

Long respected as the OG of the 13 Fishing lineup, Omen Black-series rods continue to lead 13’s domination of the new school. Available in lengths, actions and powers that cover techniques both current and emerging, every stick in the tournament-proven series features Japanese 36 Ton Toray blanks with Poly Vector Graphite technology. Those innovations make Omen rods lighter and more sensitive without sacrificing durability.

Helping design new rods is something is Swindle really enjoys.

“I love having direct input with the guys’ who make the product. To be able make a difference and help with rods means we can build something together,” he says. “For where I’m at, dude, this is perfect.

“I’m looking at the new stuff coming and this is exactly what we need,” Swindle says. “We can kind of ‘do the homework’ for everybody, so people don’t struggle when they come in the store and they know what they’re going in there to get.”

Swindle is looking forward to a “super, super soft” baitcasting rod with a “really parabolic” bend for fishing his Rapala DT-6 and DT-10 crankbaits. “Because you can truly overpower your crankbaits if you get too stiff of a rod,” he explains. “I want a rod that has a nice forgiveness to it â€“ a nice feel â€“ but has a little ‘meat’ on it. Because if you’re ripping that bait out of the grass, you want the bottom part of it to be kind of beefy.”

He is also looking forward also to a “perfect rod” for launching deep-diving Rapala DT-20 crankbaits “a long, long ways â€“ really let ’em fly.” It will feature a fast-action tip “you can load” and a slightly longer-than-average handle. He’s also working on numerous upcoming projects with technique specific applications in mind.