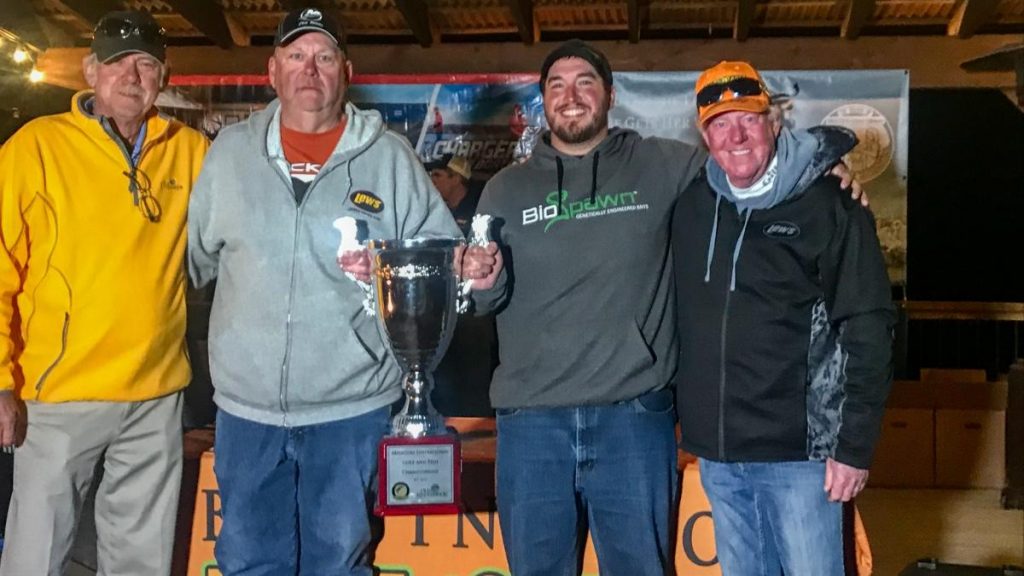 A change in the format of the BassingBob Missouri Invitational Pro-Am Fishing and Golf Championship worked in the favor of Andy Newcomb and Chris Bridges.

The Missouri Invitational sponsored by Duncan Fine Jewelry and Ulrich Marine at Lake of the Ozarks Nov. 12-15 was originally slated for fishing the first competition day followed by golf the second day and fishing on the final day. However soggy grounds at the Old Kinderhook Golf Course led to a schedule change with fishing the first two days and an option of fishing or golf on the final day when the course was deemed playable.

After the first two days of fishing, Bass Fishing League (BFL) and FLW Costa pro Andy Newcomb and his amateur partner Chris Bridges sat in second place with 10 bass weighing 32.84 pounds. Newcomb admitted he was “not a good golfer” so it was an easy decision for Bridges and him to opt for fishing over golf on the final competition day. They made the smart choice as they weighed in a 12.20-pound limit for a three-day total of 45.04 pounds to win the tournament and the top prize of $25,000. Finishing only .03 of a pound behind the winners was the team of Justin McClelland and Denise Dill with 45.01 pounds.

The first- and second-place teams shared a spot each day on the Niangua arm of the lake.

“We had a spot that we started and spent a lot of time in each day,” Newcomb said. “We caught most of those fish there on a Wiggle Wart (crankbait) and a Chatterbait.”

The winners keyed on channel banks where they caught most of their fish 6 to 8 feet deep. “I had been on some fish flipping to shallow targets over the weekend, but we checked out that the first day a lot and I think we caught one so we scrapped that pretty quick and started fishing channel banks. The first day we had five keepers on four different baits. Our pattern was kind of junking it together.” They finished Day One in 10th place with 13.25 pounds.

The second day Newcomb and Bridges mainly threw spinnerbaits and Wiggle Warts to complete another limit. Newcomb disclosed they caught some keepers from their primary area but most of their bigger fish came from another spot.

On the final day, the 36-team field could choose either 18 holes of golf or fishing. Twenty-two teams headed to the lake while 14 teams headed to the golf course. Newcomb and Bridges struggled early and caught only one keeper on a crankbait. When they ran into a stranded boater, they gave him a tow and then had only about an hour left to fish. “We actually went to some docks and caught some fish on jerkbaits (Smithwick Rattlin’ Rogues) to fill out our limit.”

Pairings were determined by the amateur anglers bidding in live and silent auctions for the pro anglers they wanted as a partner for the three competition days. The 58-year-old Chris Bridges was fishing in his fourth Missouri Invitational and reaped the reward of bidding on Andy Newcomb for his partner.

“I know a bunch of these guys,” said Bridges, a transmission parts store owner from Independence, Mo. “I tournament fish a lot and this is like my vacation. It is a laid-back atmosphere and I just enjoy the guys.”

Bridges highly recommends the Missouri Invitational for amateur anglers interested in competing in the event. “You get to fish with some really good guys and it doesn’t really matter your experience level, you can still learn something every time,” Bridges said.

For the full results of this year’s Missouri Invitational, visit https://bassingbob.com/tournaments/report/2019/11/15/bassing-bob-missouri-invitational-pro-am-fishing-and-golf-championship-final/ .