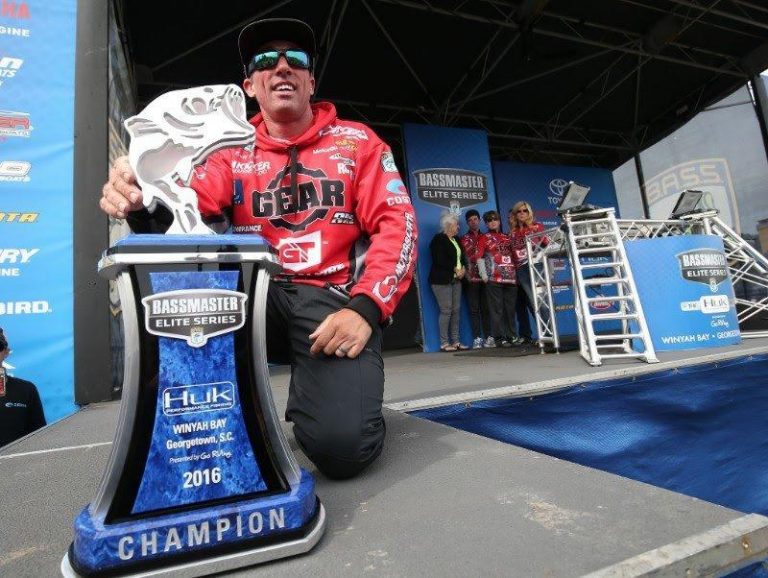 For the fourth day in a row, Britt Myers of Lake Wylie, S.C., made a long run to the Cooper River near Charleston, S.C., knowing that he needed to make all the right moves to claim the championship title.

Due to a strong cold front that shut the fishing down, Myers was forced to scrap his original game plan and try something new. The adjustment proved to be the right decision, which produced 9 pounds, 5 ounces of bass, and a four-day total of 56-3 during Championship Sunday at the Huk Performance Fishing Bassmaster Elite at Winyah Bay presented by GoRVing.

Myers had only three fish by late Sunday morning, and he knew a change in presentation was necessary if he were to remain in contention for the title.

“I thought that I had blown it,” Myers said. “The water got slick and the fishing slowed to a grinding halt, making me wonder what it was going to take to find two more fish. In my mind, I was scrambling to salvage fifth place, and that’s a tough position to be in.”

Near the end of his day, Myers had a bass try to eat a Chatterbait, but he wasn’t able to set the hook in time. He switched to a Zoom Super Fluke in a pearl pattern; a decision he made the evening before in case the Chatterbait pattern dried up.

“After switching to the Super Fluke, I caught a 10- to 11-incher almost immediately,” Myers said. “I felt that was a sign, so I stuck with it and caught several other small fish during the last hour, but I was able to fill out my limit and cull up one time before heading in.”

Myers knew that most of the anglers would fish conservatively and avoid the long boat rides to the Santee and Cooper rivers, which is where the biggest limits of bass were produced during all four days.

“I went all in on this tournament,” he said. “I knew before I ever got here that I would be making a near two-hour run to access the Cooper River. I felt that after the recent historical floods on the Santee River, the fishing would be difficult there. Honestly, I was pretty surprised at how well Kelly Jordon did on the Santee.”

Myers was fishing an abandoned rice field with irrigation drains that were filled with hydrilla and stumps creating an ideal situation to catch bass during all phases of the spawn.

“When the tide wasn’t perfect, I fished stumps looking for spawning bass,” he explained. “When the tide picked up, I fished the current breaks near the hydrilla points and near logs and laydowns. There were times when I could almost call my shot.”

Myers got his start fishing with South Carolina bass clubs, and B.A.S.S. Nation tournaments, and anglers from those same clubs helped him become more familiar with the Winyah Bay fishery.

“To me, that’s a fine representation of South Carolina bass fishermen,” Myers said. “I’m beyond proud to win this event in my home state, it’s just hard to accurately describe what I’m feeling right now.”

Brett Hite of Phoenix, Ariz., caught only two fish on Sunday that weighed 5-13. His four-day total was 55-15, which was good enough for a second-place finish just a mere 4 ounces behind Britt Myers.

“The bite was tough today, and looking back there were definitely a few things I could have done differently,” Hite said. “But, I didn’t lose any fish. I fished a good, clean tournament; I just didn’t get enough bites today.”

Hite was sure to point out that the Georgetown hospitality was fantastic, and the fans made the event very enjoyable.

Chapman was awarded $1,000 for the leading the Toyota Bassmaster Angler of the Year points race at the end of the event.

Myers earned the Power-Pole Captain’s Cash award of $1,000 for being the highest-placing angler who is registered and eligible and uses a client-approved product on his boat.

He also earned the Livingston Lures Leader Award of $500 for leading on the second day.

The Big Bass Award of $1,500 was presented to John Murray for weighing in the overall biggest bass of the event — a 8-9 bass.