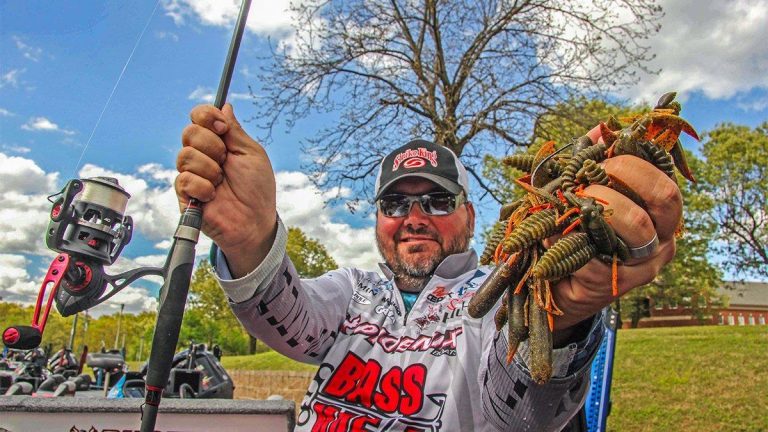 Greg Hackney does things his own way. But the bearded Louisiana pro’s willingness to change when bass fishing conditions dictate a detour is what makes him one of the most accomplished pros in the sport’s history.

“You see that pile right there?” Hackney asked with a grin. “All that killin’ took place with a baitcasting rod here on Lake Norfork, but tomorrow we head to Bull Shoals and it’ll be a completely different set of rods and reels.”

While most pros talked about the difficulty of this first-ever Bassmaster Elite Series event featuring two different lakes stuffed into one tournament, Hackney seemed to grin and embrace it; including his willingness to make wholesale changes in rods and reels.

The heavy baitcasting rods Hackney used on day one at Norfork will largely be stowed away as he battles Bull Shoals.

Spinning rods and reels will dominate the deck of his Phoenix boat. But not the bitty-sized spinning reels used by rainbow and brown trout anglers on the White River below Bull Shoals Dam.

Nope, Hackney goes big when it comes to spinning reels; typically size 40 and 50 and he can’t emphasize the importance of using large-spooled spinning reels enough. In fact, he credited large spooled reels for having a large hand in his 2014 Toyota Bassmaster Angler of the Year title.

“I see a lot of anglers using way smaller spinning reels than they should be,” Hackney said. “Back in the day, spinning reels were heavy but now the size 40 Quantum Smoke only weighs 10 ounces and its got such a big spool that line doesn’t twist on it like spinning reels used to be famous for; especially fluorocarbon.

If people will upgrade to a size 40 or 50 spinning reel, I’ll promise you they’ll grow to love fishing with spinning tackle a whole lot more. Ask VanDam, he’ll tell you the same thing; he uses the 40 and 50 sizes too.”

But what about the tiny orange rings on the carpet of his boat’s front deck following weigh-in at Norfork?

“I dipped everyone of those green pumpkin Strike King Rodents and tubes in orange die to make it look more like the orange pinchers of a crawfish,” he explained. You do what it takes to get a bite, you know what I’m sayin’?”

Absolutely. And few are better at adapting to get a bass to bite than you, Greg Hackney.