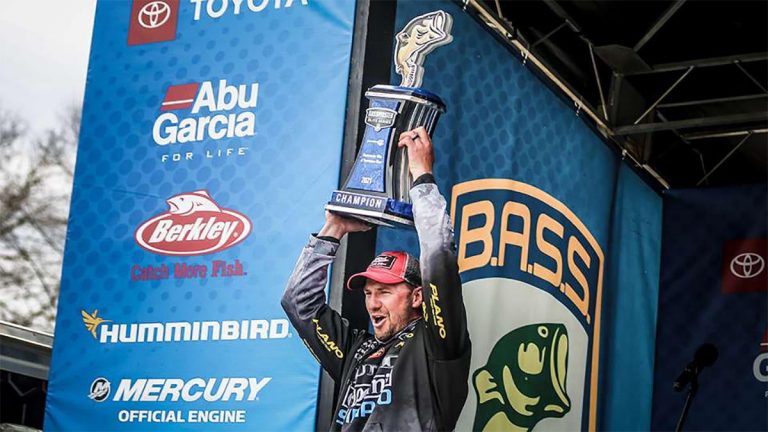 Humminbird ® and Minn Kota ® pro Jeff “Gussy” Gustafson didn’t know what to expect when he arrived in Tennessee for the second stop of the 2021 Bassmaster Elite Series. Changing conditions and unseasonably cold weather across the country had all contributed to what was shaping up to be a challenging week.

“After my first few days of practice, if someone had offered me the chance to catch a few fish and escape the tournament with a paycheck and some AOY points, I might just have jumped at it,” said the Kenora, Ontario-based angler. “Luckily, on the last day of practice, I found just enough of something to give me a little hope heading into day one of the event.”

Like many of the Elite Series anglers, Gussy used a boat launch in the canal between Fort Loudon and Tellico lakes. Early in practice, he had idled out from that launch and recognized all the ingredients necessary to hold smallmouth.

“I noticed some decent current in the canal, so I hopped up to the bow and threw down my Minn Kota Ultrexâ„¢. I found some rock on bottom and a few schools of bait,” Gussy said. “I made a mental note to stop back there and eventually did the final afternoon of our official practice period.”

Pulling up onto some of the rocky areas he found earlier in practice, Gussy dropped down with one of his favorite offshore smallmouth presentations and caught a few smallmouth in short order. Not a single one of them measured over the challenging 18-inch minimum size limit, but after a tough practice it offered the smallmouth expert a glimmer of hope.

The first day of the tournament, Gussy hit his spot in the canal and quickly filled his limit with 18-inch-plus smallmouth. Not only did it give him the top weight for the day, it also allowed him the time to really learn the area and the presentation he would use to take home the top prize.

“The fish were fairly tough to see on electronics. They were literally belly to the bottom. My Humminbird HELIX ® 10 on my bow is as dialed as any fish finder I’ve ever seen and because those fish were hiding in the rocks out of the current, I wasn’t so much interested in trying to study my screen and find fish. Instead, I spent my time looking at my Humminbird MEGA 360 ® and identifying rock areas that would likely hold fish looking to ambush bait from a more peaceful spot.”

Gussy explained that his presentation required a very controlled drift to keep him directly above his bait so that he could see his jig and watch the fish come up to it.

“Of the 20 fish I weighed, I watched 19 of them come up and eat my jig. Sometimes they would just come up and whack it and other times they needed a little action,” added Gussy. “I could see everything the fish did right on my HELIX unit thanks to the Built-In MEGA Side Imaging ® integrated into my Ultrex trolling motor. I was even able to watch other fish come chase the ones I was reeling up, which gave me additional confidence in my spot, knowing that there was a good number of fish in my little sweet spots.”

Armed with the information provided by his MEGA 360 and newfound confidence in his spot, Gussy continued to milk the area over the next three days of the derby, never relinquishing his lead and locking down a rare wire-to-wire win at the top level of his sport.

“It was amazing what I was able to learn over my four days of tournament fishing,” Gussy said after hoisting his first Elite Series trophy. “The MEGA 360 Imaging capability allowed me to identify the little spots that would hold fish. I went from thinking these fish were randomly located to really being able to put together milk runs as I made my controlled drift through the fish.”

While the first three days of the tournament shined a light on what can be learned by using MEGA Imaging, the final day was as much about his Minn Kota Ultrex and its ability to deliver boat control and power in the face of adverse conditions.

“The last day, the current was ripping and so was the wind,” Gussy said. “Honestly, it was probably the heaviest current I’ve ever fished in. My presentation required me to stay directly above my bait.

Spot-Lock ® is awesome and I use it a ton, but in this particular instance I had to rely on my Ultrex to be super responsive as I worked to keep my drift controlled and accurate to hit my key areas. I was amazed and thankful for how much power was in the Ultrex – there’s no way I could have fished in that current and wind effectively without it.”

Back in Kenora, taking some time off before the next Elite Series event, Gussy reflected on his first big win at the premier level of the sport he loves.

“I’ve worked hard to get here and have partnered with what I believe are the best brands in the business,” Gussy shared. “I’ve been using Humminbird and Minn Kota products since I can remember, and I have no doubt they contributed greatly to this win and will be on my boat for the next one.”