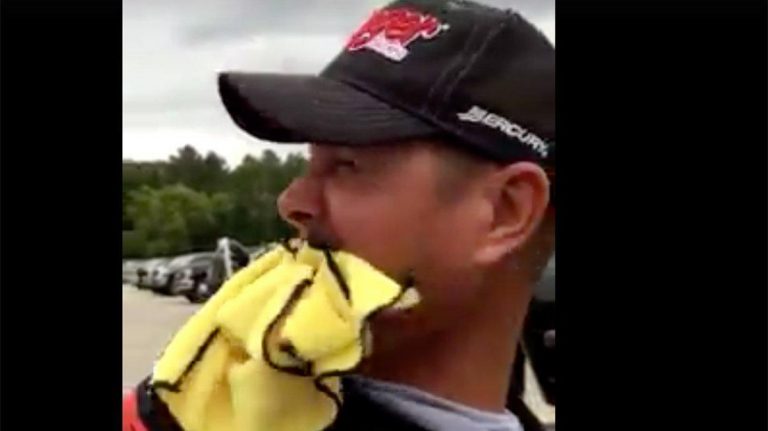 If you haven’t seen the towel biting footage of Shaw Grigsby removing a deeply embedded treble hook from the palm of Jason Christie’s left hand after Day 1 weigh-in at BASSfest yesterday, check out Christie’s Facebook page.

But the question is, why did Christie choose Shaw Grigbsy as his makeshift parking lot surgeon from the pack of 108 other anglers who could have helped?

“Even back in the early days, I was the guy other anglers would come to when they got a hook stuck in ‘em,” Grigsby said. “My wife is a nurse, and I’ve just been around that sort of thing a lot, and it doesn’t bother me, so I’ve kinda gained the reputation as being the go-to guy out here on tour for hook removal.

“But I’ve gotta tell you, that hook Jason had in his hand yesterday was one of the toughest I’ve ever had to deal with. It came into the meat of his thumb, and went all the way to the bend of the hook. Plus, it was at a very bad angle so that I couldn’t pull it loose with the method we typically use, where you press down on the eye of the hook and pull it out backward with fishing line doubled around the throat of the hook.

“I told Jason he could go to the ER and they’d numb it up, push it through and cut it with pliers. But he chose to let me do the very same thing with a pair of side cutters and an ice cube,” Grigsby grimaced.  “It worked. We got it out. And let me tell you, Christie is one tough son-of-a-gun!”

Grigsby has taken dozens of hooks out of fellow B.A.S.S. pros and saltwater fishing companions over the past 30 years, but he says there was a time when he refused to help.

“Charley Hartley came to me and asked if I’d take a hook out of his ear, but there was no way I was touching that one,” Grigsby said. “Charley is a great guy, but that hook was in the cartilage, and I knew better than to try to work on that one. I sent him to the doctor.”