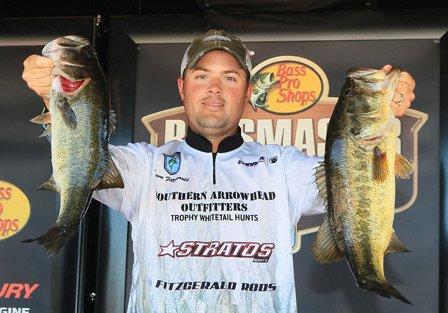 BASS photo
Trevor Fitzgerald of Ocala, Fla., got perfectly dialed in on the final day of the 2010 Bass Pro Shops Bassmaster Southern Open finale on Lake Seminole. Fitzgerald, a 27-year-old police deputy’s sheriff, only caught three fish Thursday but refined his pattern Friday and put himself in position to catch the third heaviest limit of the tournament Saturday â€“ a 19-1 bag which built his three-day total to 44-2.

Fitzgerald relied on a black-and-blue Reaction Innovations Sweet Beaver pegged to a 1-ounce tungsten weight. He flipped the rig into matted hydrilla. For his win, he took home more than $35,000 and moved into 8th place in the Southern Opens points standings, which puts him right outside the 2011 Bassmaster Elite Series cut. However, if one angler doesn’t accept the Elite invitation, Fitzgerald will have the opportunity â€“ if he wants it.

“My wife and I have a few things to take care of before I can consider getting into that,” he said. “But, to finally win something like this is huge. I’ve won some other tournaments, but nothing like this. This is by far the biggest win I’ve got.”

Behind him in second was Day 2 leader Derek Allen of Ponchatoula, La. Allen said he let the tournament slip through his fingers as a “three- or four-pounder” fell off of the hook of his Spro Bronzeye frog.

“You live by the frog, and you die by the frog,” he said about the bait with which he caught most of his fish. “I made mental errors today and I lost it.”

Allen weighed in 13-8 the final day for a total of 42-13. Behind him was Clint Brown of Bainbridge, Ga., who tallied 42-0 over three days.   Brown’s 23-pound, 7-ounce limit on Saturday was by far the biggest of the day and tournament.  In fourth was Cliff Prince of Palatka, Fla., who managed 37-14 and fifth was Randall Tharp of Gardendale, Ala., with 37-4.

On the co-angler side, Fred Hood of Monroe, Ga., took the top prize of a fully rigged Skeeter/Yamaha boat and motor package. Hood had a three-day total of 20-11, which put him more than 3 pounds in front of runner-up Steven Wells of Bainbridge, Ga., who had 17-3. The full standings of both divisions can be found below.

With the conclusion of the 2010 Bassmaster Southern Opens, two Classic berths were awarded in addition to seven Elite Series invitations. With his fifth-place finish in the last Southern Opens stop, Tharp won the points race and will participate in his first Bassmaster Classic in 2011. Tharp has had much success on the Open level but still had fallen short of qualifying for the Classic until now.

“For anybody who knows anything about tournament bass fishing, going to the Classic is almost unreal,” he said. “I’ve fished most every championship there is, but never the Classic. This is what I’ve wanted to do for quite some time.”

Thanks in part to his win at the second stop in the Bassmaster Southern Open on Alabama’s Smith Lake, Andy Montgomery of Blacksburg, S.C., took the second berth via the Opens.

With the Southern Opens in the books, the Opens will finish up Oct. 21-23 with the Bass Pro Shops Central Open on Lake Texoma.   There, two Classic berths will be determined along with seven Elite invitations.