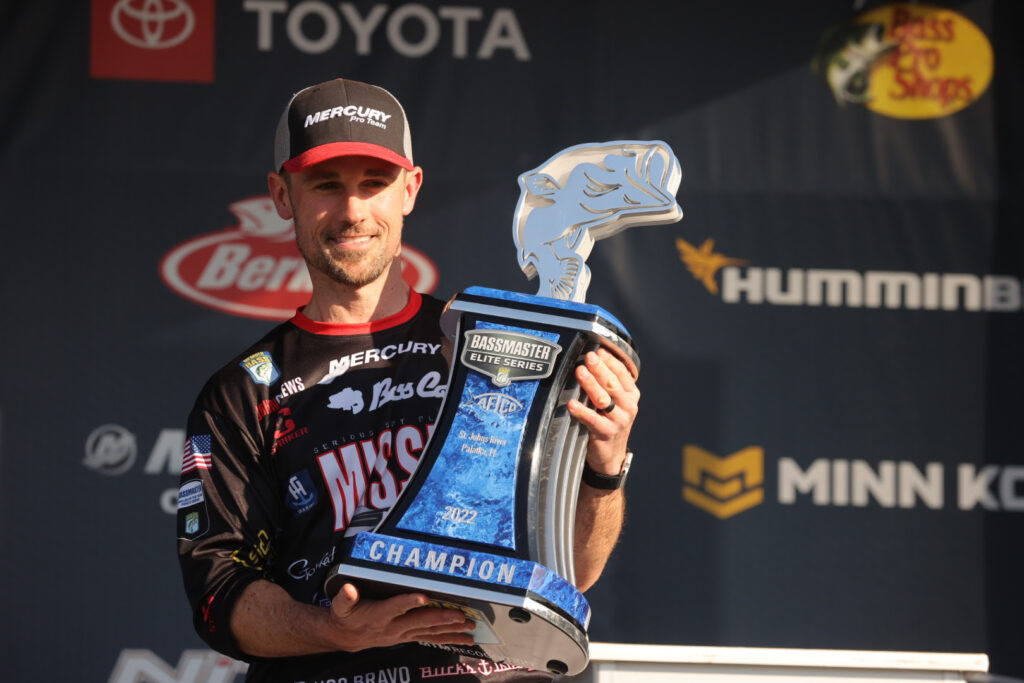 Mother Nature did not serve up slam-dunk potential, but John Crews leveraged a stellar start and paired it with steady productivity to win the AFTCO Bassmaster Elite at St. Johns River with a four-day total of 75 pounds, 4 ounces.

Edging Bob Downey of Hudson, Wis., by 1 1/4 pounds, Crews won the top prize of $100,000 and added another blue trophy to the one he claimed a dozen years ago on the California Delta.

After adding 17-3 on Day 2, Crews fought through a tougher semifinal round on Saturday to catch a 13-pound limit, anchored by a 6-pounder. On Championship Sunday, he sealed the win with 17-1.

Starting his 17th year on the Elite Series, Crews acknowledged the supreme challenge of a clean sweep and said consistency drove him to victory. He fished clean, lost no keepers and made good decisions throughout a week marked by moody Florida weather and unsettled fish.

After a cold, wet practice period, the tournament saw the typical post-frontal conditions — high pressure, clear skies and flat wind — for the first two days. Temperatures started rising quicker than expected, and just as soon as Day 3 appeared to be stabilizing, Championship Sunday brought clouds and rain early, then a sunny afternoon.

“I got unbelievably fortunate; you have to catch a huge bag at least one of the days,” Crews said. “To win a four-day event in Florida, you can’t have any days where you slip.

“I was fortunate that (Day 3) was my only slip day and I had a 6-pounder that really saved it, or it would have been really bad.”

Each day Crews spent about half of his time in Rodman Reservoir, upriver from Palatka. He also fished the main river and the Rodman Canal — both sides of the Buckman Lock accessing Rodman. Inside the reservoir, Crews caught fish on standing timber and pads, while a mix of pads and other shallow targets comprised his river and canal action.

In Rodman’s deeper areas, Crews threw a suspending jerkbait and a drop shot rigged with a prototype Missile Baits worm. He caught a bed fish in Rodman with a Texas-rigged Missile Baits Quiver Worm and also threw a Zoom Fluke.

Around pads in the river and canal, Crews caught bass on a 1/2-ounce white spinnerbait and a 3/8- and 1/2-ounce Z-Man ChatterBait JackHammer. He paired the latter with a Missile Baits D Bomb in the bruiser (black/blue) color and a white Missile Baits Shockwave, based on conditions.

“I just went out and fished like I normally fish, which is all over the place,” Crews said. “I was throwing a spinning rod in 25 feet of water one minute and I’m throwing a (reaction bait) in a foot of water 20 minutes later. Luckily, on the St. Johns River, that works.

“That’s exactly what I did the last four days. I just mixed it up based on the weather.”

Finishing second with 74 pounds, Downey followed his second-place Day 1 limit of 27-4 with a disastrous Day 2 that saw him weigh a single fish that went 6-11. Downey added 10-14 on Day 3 and slipped to seventh, but roared back with that huge final-round catch of 29-3, which included an 8-pound fish.

All week, Downey fished the warm outflows of Salt Springs on the northwest side of Lake George, upriver from Palatka. He caught all of his fish on a Storm Arashi Vibe lipless bait in a gold color. After trying various lipless baits, Downey surmised that the fish responded best to the Arashi Vibe’s more subtle presence.

“What more can you ask for? It was just insane out there this morning — and to cap it off with an 8-pounder,” Downey said. “Aside from Day 2, it’s been an amazing week.

“The (colder) conditions lined up really well for me on Day 1 and then this morning was really good for me too, with the cloud cover.”

Masayuki Matsushita of Tokoname-Shi, Japan, finished third with 69-13 and is leading the Falcon Rods Bassmaster Rookie of the Year standings. After placing 41st on Day 1 with 12-1, he bolted up the leaderboard to second after catching Day 2’s heaviest bag — 23-5. Matsushita added 17-7 on Day 3 and ended with a final-round limit of 17 pounds.

Matsushita also caught fish on a free rig — a Japanese innovation that employs a 3/16-ounce teardrop-shaped sinker hanging perpendicular to the line. He used this in conjunction with a Texas-rigged Zoom Magnum Finesse Worm in junebug and redbug colors.

As part of the Yamaha Power Pay program, Patrick Walters of Summerville, S.C., earned an additional $2,500 and Drew Cook of Cairo, Ga., claimed an additional $1,500 for being the second-highest placing entrant.