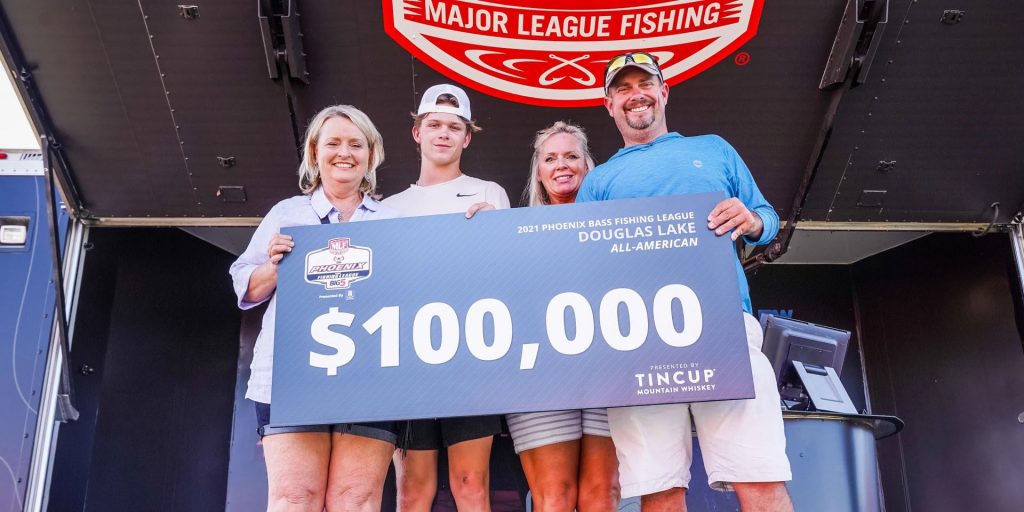 “I’m usually a really talkative person, but today at noon I hadn’t said more than three words,” Grimm said after earning the victory. “It was kind of tough, today. I only managed seven keeper bites. But thankfully they were the right ones and it all worked out.

“It really hasn’t sunk in for me, yet,” Grimm continued. “It’s a lot of money. I’ll probably do something boring with it â€“ stick it into a retirement account or buy a rental property or something like that. I’m not going to go buy a yacht, or anything like that.”

Grimm said he caught his fish this week fishing a narrow section below the Nolichucky River, targeting offshore river drops where the fish gang up with a shad-colored Strike King 6XD crankbait.

“I love fishing shallow â€“ I consider myself a shallow-water angler. But I fished shallow here for two weeks prior to the off-limits period and I couldn’t catch anything more than 3 pounds. I didn’t feel like I could win on the bank, so I committed my time offshore.”

Grimm considers Douglas Lake and Cherokee Lake his home waters, and when asked if he had any aspirations of moving up to the Toyota Series or Tackle Warehouse Pro Circuit, he said he’s happy to stay around home.

“I fished the (FLW) Tour one year â€“ I’ve been there, done that,” Grimm said. “I don’t know that I’m good enough to compete. I’m not on that level. I’m good around here on a couple of lakes, and I’m going to stay here on these couple of lakes and just keep trying to catch them.”

With his victory, Grimm now automatically earns entry into the 2021 Toyota Series Championship on Pickwick Lake in October.

“I’ll definitely be giving that tournament my all, and I’ll prepare for that event just like I did this one. Hopefully that one will work out just as well.”

Complete results can be found at MajorLeagueFishing.com.

Buswell became the first co-angler to ever win the All-American Championship twice â€“ he previously won the title in 2013 on Nickajack Lake in Chattanooga, Tennessee.

In addition to the cash payouts, the highest-finishing boater and Strike King co-angler from each of the seven Regional Championships (including the Wild Card) and the TBF National Championship at the All-American will advance to the 2021 Toyota Series Championship on Pickwick Lake in Counce, Tennessee, Oct. 28-30, for a shot at winning $235,000 and $33,500, respectively.

The eight boaters and Strike King co-anglers that now advance to the 2021 Toyota Series Championship on Pickwick Lake are: