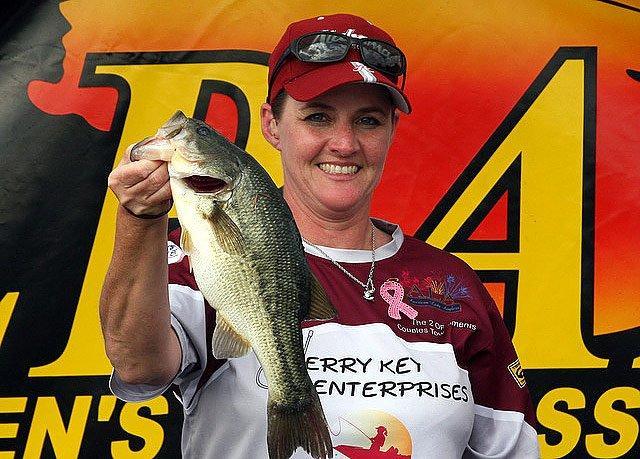 “My bite at the first spot was not there,” Bowden commented. “I didn’t catch another keeper until around 12. It was on the frog and they blew up on it all day long but were missing it. Finally toward the end of the day I thought, my arm is killing me and I cannot do this frog anymore.”

In the midst of the dry spell Bowden began to doubt but then began to calculate. “I knew that for every fish I caught they would have to catch two and with only one fish earlier I thought if they catch four â€“ that’s going to make it pretty close.

“This was a dream of mine but I didn’t think it was ever going to happen,” she added. “Even now I don’t think it has soaked in yet.”

Fannett, Texas co-angler Renee Key-Johnston had a fairy tale LBAA Lady Bass Classic. She brought no fish to the scales on the opening day of competition. On day two she had her three fish limit and on day three she had one bass, but it was just enough to propel her from second to first and allow her to capture the LBAA 2012 Lady Bass Classic Co-angler Championship.

“I caught fish the first day but not big enough to weigh and it was disappointing,” Key-Johnston stated. “Day two was really a great day because I had three limits. Today I caught mainly short fish but I was able to get a keeper this morning.”

“I’m very excited about winning the Lady Bass Classic,” she went on to say. “I am so pleased to be a part of the LBAA family.”

Key Johnston caught all of her fish on a H20 Express Sexy Melon crankbait.

The final standings for the LBAA 2012 Lady Bass Classic co-angler division are as follows:

Legend Big Bass award winners were Cheryl Bowden on the pro side with a 5.35-pound bass. Denise Sustaita captured the award on the co-angler side with a 4.93-pound bass.