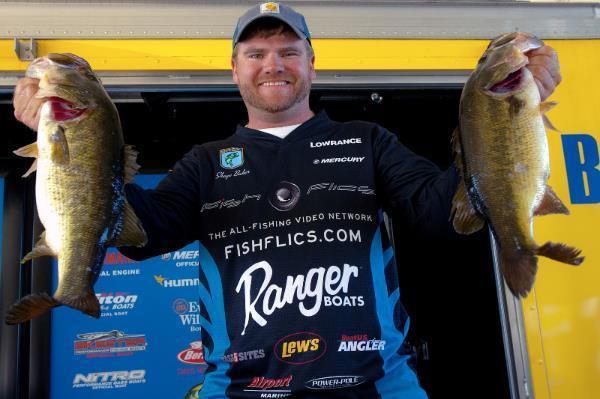 Alabama’s Shaye Baker didn’t just hold on at the Bassmaster Classic Wild Card presented by Star Tron, he increased his lead over the other 48 competitors. After tallying a limit weighing 29 pounds, 8 ounces on the first day, Baker was back with 19-6 on Day 2 for a total of 48-14.

That’s nearly 6 pounds better than his closest competition, Chad Morgenthaler of Illinois, who moved up from third place on Day 2 with a two-day total of 43-1. Jesse Tacoronte of Florida is in third with 39-15. The Day 1 second place angler, Russ Lane of Alabama, fell to fourth with 39-6. They are the only anglers within 10 pounds of Baker.

For the third and final round on Saturday, only the Top 12 anglers will compete. Weights carry forward, and only the winner will earn a berth in the 2014 Bassmaster Classic on Lake Guntersville in Alabama, Feb. 21-23.

The best overall catch in the second round belonged to Alabama’s Derek Remitz, whose best five bass weighed 23-8, giving him 35-9 for the tournament and putting him in eighth place. He was in 23rd place going into the day, and his 15-spot jump was the biggest of anyone in the competition.

The anglers tell much the same story so far. All of the contenders seem to be pitching, flipping and punching thickly matted vegetation on the west side of Lake Okeechobee. Baker’s catch was impressive even though it was 10 pounds less than he posted the day before.

â€œMy main area was beat to shreds,â€ he said. â€œThere were about 10 other boats in there today, including several of the anglers in the Top 10. I mostly stayed put so I could guard my best patch of hyacinths. I plan to start there tomorrow.â€

Morgenthaler described the fishing on Day 2 as â€œa grind.â€

â€œI had to move out from my main area from the first day and worked really hard for my fish,â€ he said â€œI think there’s a pile of bass in my area, but they’re not being very cooperative.â€

Like most of the other anglers high on the leaderboard, Tacoronte is punching a 2- or 2 1/2-ounce tungsten weight through the mats to reach the fish below. He’s fishing a black-and-blue Bitter’s B.F.M. for most of his catch.

Russ Lane admitted that he may have fished his top spot a little too hard on Day 1.

â€œI beat ‘ em up pretty hard,â€ he said. He’ll likely be fishing new water in the final round.

Gary Clouse of Tennessee ranks fifth. Once he realized he’d be inside the cut to fish Day 3, he stopped working his primary area to save it for the finals. â€œI’m catching plenty of good fish,â€ he said, â€œbut nothing big. Hopefully that will change tomorrow.â€

Other finalists are Jeff Kriet of Oklahoma, Greg Hackney of Louisiana, Keith Poche of Alabama and Drew Benton and Cliff Prince, both of Florida.

Baker’s lead over the rest of â€œthe dozenâ€ is sizable, but hardly commanding, especially in Florida where the bass can be notoriously fickle and unpredictable, and big bass are always a threat.

Only one thing is sure. One of the Top 12 anglers will earn the 56th and final berth in the 2014 Bassmaster Classic.