One of the craziest shapes we’ve seen on a big bass came to our attention yesterday. Here is the full release from MyFWC.com.

This comes close to the current certified state record of a 17-pound, 4-ounce largemouth bass caught in Polk County in 1986. A team of FWC biologists verified the accuracy of Dominic’s scale, catch videos and photos.

“When I first saw the fish, I thought it was a log with a volleyball under it – until it moved,” said Dominic. “Once I realized it was a big bass, I started targeting it and just kept trying until it took the bait.” 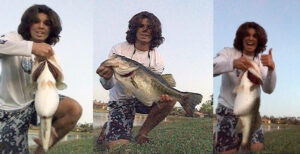 Dominic is 19 years old and learned to fish from his father, Joe. The Montalto family refers to themselves as a “fishing family,” noting that they made the move from Illinois to Florida a year ago and specifically selected their home based on nearby fishing ponds. Dominic currently attends Florida Gulf Coast University where he is pursuing a degree in physical therapy.

TrophyCatch is a partnership between FWC biologists, anglers and fishing industry leaders, such as Bass Pro Shops, that rewards the catch, documentation and release of largemouth bass weighing 8 pounds or heavier in Florida. In order to be eligible for prizes, anglers are required to submit photos or videos of their catch to TrophyCatch.com, showing the fish’s weight on a scale, before releasing it back into the water. FWC biologists use TrophyCatch data for bass research, to make informed decisions about the management of Florida bass fisheries, and to promote the catch-and-release of trophy bass.

Dominic’s trophy bass qualifies him for the TrophyCatch Hall of Fame Club, which offers rewards for catches weighing 13 pounds or heavier. Hall of Fame Club catches are celebrated at a ceremony each year and club members receive $100 gift cards to Bass Pro Shops and/or Rapala, a fiberglass replica mount from New Wave Taxidermy, a $50 SpiderWire merchandise credit code, and a Fitzgerald Rod, among other prizes. Since the beginning of Season 5 in October 2016, 12 Hall of Fame bass have been approved. Dominic’s catch also puts him in the lead for becoming the TrophyCatch Champion, which is awarded to the angler with the heaviest catch of the season. Anglers have until the end of Season 5 on Sept. 30, 2017, to submit their catches and try to take the lead.

The FWC encourages anglers to join TrophyCatch as citizen-scientists to assist in fisheries management and the conservation of Florida’s lakes and rivers. A new TrophyCatch mobile app is available for download on both Apple and Android devices. For more information about the TrophyCatch program, email Amber Nabors at Amber.Nabors@MyFWC.com.