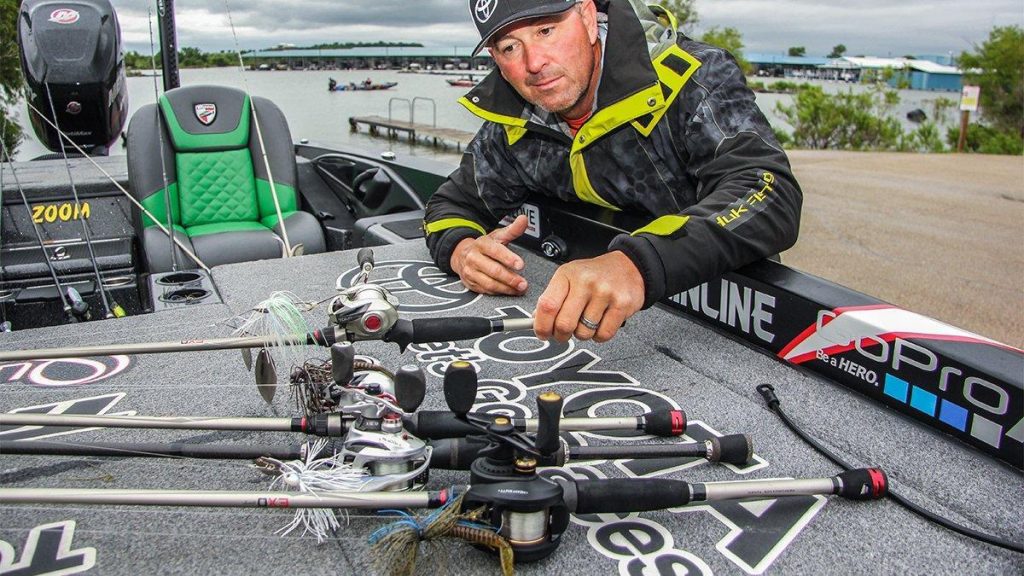 Under rainy skies that lacked any evidence of a rising sun Wednesday morning, Gerald Swindle sat tying on lures at a Lake Ray Roberts boat ramp, prepping for his final day of practice while his trusted bride â€œLuluâ€ stood nearby in rubber boots listening to him express hopes that fishing would improve.

â€œThis will be the toughest Toyota Texas event we’ve ever fished,â€ Swindle said. â€œThis isn’t nearly as strong a fishery as the four events we’ve had at Lake Fork or the five we fished at Conroe.â€

Indeed, it’s tough to rival the legendary reputation those previous host sites have for kicking out impressive numbers of giant largemouth. Not to mention, Swindle had never cast a lure in Ray Roberts until this week.

â€œI fished 12 hours yesterday and had two keeper bites; one 3-pounder and one 4-pounder,â€ Swindle said. â€œThat’s a grind. I talked to Jordan Lee and he said he had seven bites all day and most every one of them was about 8 inches long. There are miles of good-looking water on Ray Roberts but I just haven’t had many bites and when you see them deeper offshore on your sonar it’s one and two fish, not big schools.â€

â€œI’ll probably try to stick to my strengths and mix it up shallow,â€ Swindle said. â€œYesterday I idled through some standing timber to the very back of a creek thinking I might find some fish that hadn’t been pressured, but given the lack of keepers I caught and the fact that I never saw another tournament boat until after lunch, tells me I might have outsmarted myself just a bit.â€

While numerous Quantum rods and reels sat scattered around Swindle’s boat, when asked what lures he’d lean on most, his starting lineup included a classic shallow-water arsenal.

When asked why such a heavy spinnerbait, Swindle explained that the added weight gets the lure down deeper into the thickest part of the flooded bushes.

This unique annual tournament is part of a music and outdoors festival that features concerts from top country music artists like Big & Rich, Eric Paslay, Lee Brice, Roger Creager, Kip Moore and Chase Bryant, as well as 15 of the top anglers from the Bassmaster Elite Series and 15 of the best from the FLW Tour, based on last year’s Angler of the Year Points rankings.

â€œSome of these guys came here for an MLF event but the water level was 9 feet lower, so they can’t take much from that experience,â€ Swindle said. â€œAnd the Bassmaster Elites have been on the road nearly constantly. In fact, this is the ninth straight week away from home for me, so I’ve had zero time to practice here. If anybody has a slight advantage it’s probably the FLW guys because I’m guessing some of them had time to come here and look around before the lake went off limits.â€

What Will It Take to do Well?

â€œI’m not saying you can win with 17 pounds a day, but I’d take 17 a day right now and feel confident I’d do really well,â€ Swindle said. â€œI’d love to win this event. It’s an awesome event, but based on yesterday’s practice, I’ve still got a lot of work to do.â€

Swindle is correct; it’s an awesome event. Toyota Texas Fest kicks off Friday with concerts and day one weigh-in and runs throughout the weekend at Toyota Stadium in Frisco, Texas.

Over the past nine years, this event has contributed $2.25 million to Texas Parks & Wildlife Department education and outreach programs. These programs include the Neighborhood Fishin’ Program, which stocks fish into small urban ponds to provide people the chance to catch fish close to home.

Along with the coveted title of TTBC champion, the anglers will be competing for two additional awards. The angler who catches the single heaviest fish from any of the three days of competition will win the Toyota Tundra Big Bass Award and a new 2016 Toyota Tundra. The LEER Heavy Weight Award, a new LEER truck cap, will be given to the angler with the heaviest single-day weight from any one of the three days of the tournament.

For more information including how to purchase tickets, visit ToyotaTexasFest.com.