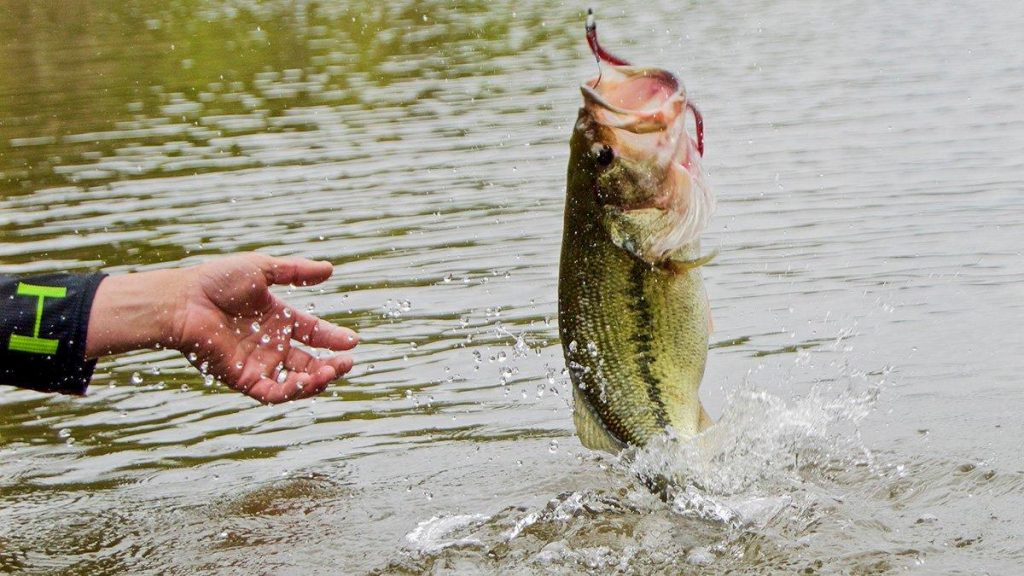 In the current day and age of bass fishing, it is easy to get overwhelmed with different baits, rods, reels, electronics, boats and every other variable can spin you out before you ever even get on the water. In the world of complex, it can regularly pay-off to simplify your fishing approach with a simple worm.

Straight-tail worms like the Zoom Trick Worm have stood the test of time while helping anglers keep things simple and catch more bass. Toyota pro Gerald Swindle will be the first to tell you how simple, yet versatile fishing a straight-tail worm can be.

“It is the most versatile bait in the boat,” Swindle said. “You can rig it about a 500 ways, and fish it in any depth, or any body of water. A Trick Worm just flat out catches fish everywhere I have fished.”

There are a myriad of colors, sizes, shapes, and actions for the pieces of plastic we try to fool bass with. Instead of getting caught up in the conundrum of choosing the “perfect plastic” for each individual application, Swindle stresses going with the tried and true above all else.

“There is something special about the gliding, and non-intrusive, action of a straight-tail worm,” Swindle said. “Especially when bass have been getting plenty of pressure. The subtle action of a Trick Worm won’t scare spooky bass, even if it’s rigged on heavy weights and line.”

Many anglers assume the muted action of a straight tail worm is reserved for catching smaller fish. While Swindle rejects the notion of pigeonholing the lure as only a keeper catcher.

“Sure they will catch the fire out of smaller fish, but I’ve caught several 8-pound bass  with them,” he said. “Every cast I make, I know I am liable to catch a giant.”

Similarly to his bait profile choices, Swindle emphasizes on keeping his color selection as elementary as possible.

“Except for rare occasions I only throw two colors,” Swindle said. “Out of a thousand colors, I’ll pick red bug or green pumpkin 100 percent of the time. They might as well be the only two players on my team.” 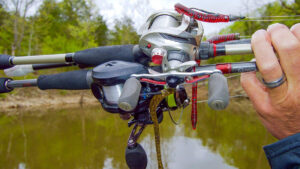 The duct tape of soft plastics

Like Duct Tape, straight-tail worms have 1,000 uses in bass fishing.

“Heck you can drop shot it, wacky rig it, drag it on a Carolina-rig, Texas-rig it, fish it weightless, throw a nail in one side of it, shaky head it, and that’s just what I have rigged in my rod locker now.”

A straight-tail worm is multifaceted beyond the presentation; it is also incredibly resourceful for fishing different regions, water temperatures and even for different species.

“I can’t think of many other lures that have won smallmouth derbies, spotted bass derbies, and largemouth dominated tournaments,” Swindle said. “A straight-tail worm works anywhere from Florida to Canada, east coast to west coast, and it is effective at any depth or water temperature.” 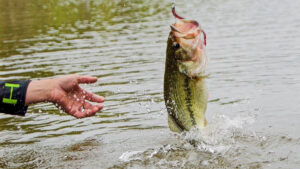 Although there is a plethora of rigging options to choose for straight-tail worms, Swindle has 3 standby presentations.

“A 1/8-ounce shaky head with a Trick Worm threaded on it never leaves my boat,” he said. “When I need to get a bite, this set-up is a proven fish catcher.”

“Around the spawn, I want to be casting my shaky head in places the pass through coming and going,” Swindle said. “Meaning I want to be fishing staging areas, where I can catch prespawn or post spawn fish. Areas like creek channel swings or secondary points. Find a bit of rock or shell on the bottom and just drag your worm around.”

A Trick Worm on a shaky head may be his first option, but Swindle assures a simple Texas-rigged Trick Worm gets a lot of playing time in his boat.

“If I am on a fishery with a lot of shallow grass or wood and the bite is tough, a Texas-rigged Trick Worm will be glued in my hands,” Swindle said. “If you know the fish are around shallow cover, but you can’t get them to bite a bigger flipping bait, this will coax them into biting.”

“When flipping a plastic like a Trick Worm, you don’t want to overpower the bait with a heavy weight,” He said. “With a light 3/16 or 1/4-ounce weight, the bait will glide around through the grass or wood naturally.”

A Carolina-rig with a 1-ounce weight is Swindle’s final “old-faithful” presentation when rigging his Trick Worms.

“Around the time the bass are getting into their post-spawn funk I use a Carolina-rig to target the first place they reach after leaving the shallows,” Swindle said. “The first offshore structure is what I’ll be focused on. Whether it’s a main lake point, a shell bed, hump, or a river ledge doesn’t matter. I want to try and intersect them when they leave the shallows and head to their summer haunts.”

Swindle throws his Texas-rigged and Carolina-rigged straight-tail worms on a 7-foot, 4-inch medium-heavy Quantum Tour KVD casting rod with a Quantum Tour MG 100 reel. He strings it up on 16-pound Sunline fluorocarbon.

There are no bones about it; a straight-tail worm is an effective tool all year long and on any fishery, but from spawn to fall and in high pressure fishing situations is when a return to simple straight worm fishing proves more effective. 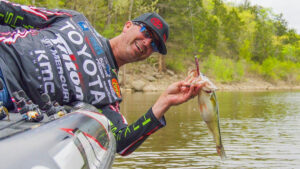