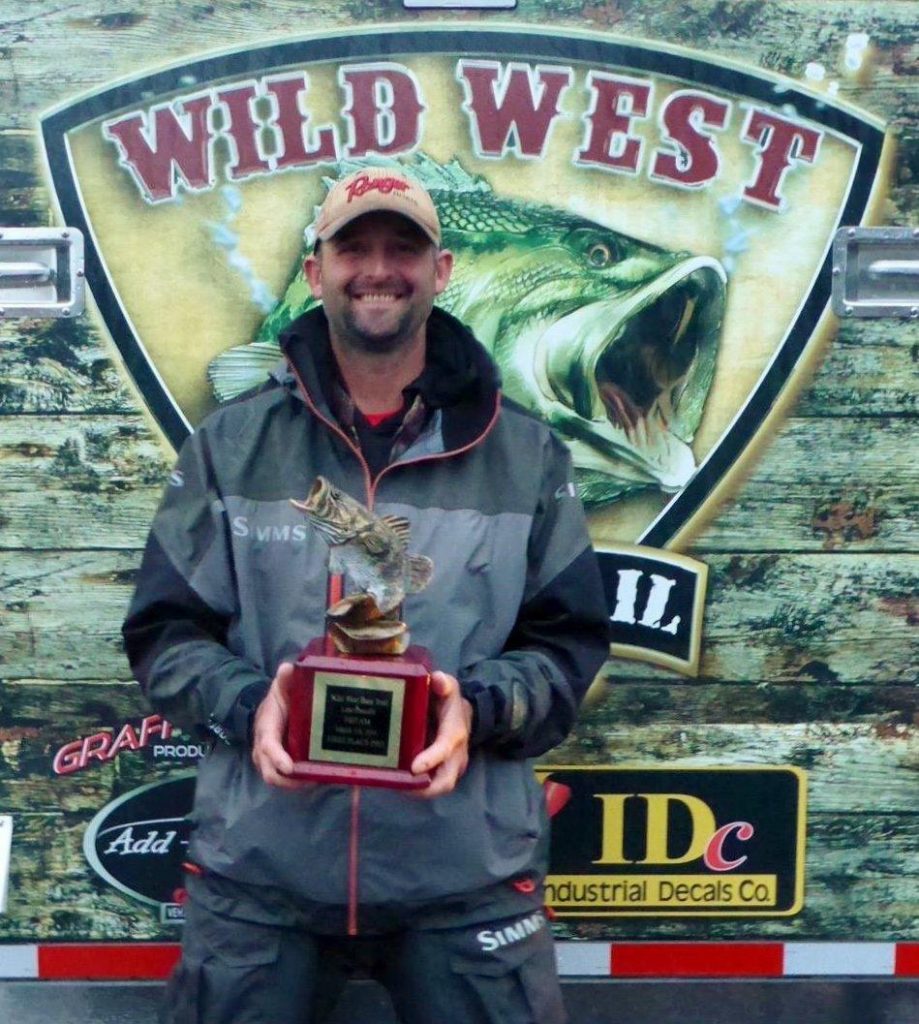 Weighing in with a tournament total of 25.11, McClellan topped the field of nearly 200 competitors and took the first-place payout of the $100,000 awarded to the anglers this past weekend.

History, experience and confidence were the ingredients that McClellan credited for his victory.

“I knew a place where there was a likelihood of some pretty good fish on Saturday morning and my hunch was right,” said McClellan. “I was basically able to fish for the lead that day, which gave me the luxury of fishing defensively, (just catching numbers of fish) for the last day.”

McClellan preferred the Middle Fork. His areas included steeper rocks and small creek inlets. His productive water was 55-degrees in a target depth of 5- to 15-ft. He estimated that he caught 30 fish a day.

“A lot of the field was targeting dirtier water from the recent runoff; but I was more consistent, fishing my strength – clean water,” he stated. “The overnight rain dirtied up most of my area and I was fishing a much smaller pond on the second day.”

A Float-N-Fly in baby bass was his primary bait. He also relied on a wacky-rigged, 5-inch, green pumpkin Yamamoto Senko. At times, his Senko presentation included a 3/32-oz nail weight. Other times it was a weightless offering.

“Day one, I took all the fish on the Float-N-Fly,” he said. “The next day, four of the five were on a Senko. From 9:30 a.m. to 1 p.m. on day two, the wind would come up and swirl a bit, making it hard to manage the Float-N-Fly. I could see fish on my depth finder a bit deeper that weren’t coming up to eat it; so I used the Senko to go down and get them.”

He noted his biggest struck on the final day, hitting a Senko that he was floating over submerged grass in one of the run-ins that he had located.

“I got three good ones first thing in the morning to start day one and I was able to cull up even more,” he shared. “I thought I had it wired. I thought I would come in ahead by three-pounds, but I came in and realized the fishing was good, the fishermen were good and there were a lot of big fish taken. You can see by the results, it turned into a horserace with a photo finish. It was a nail-biter.”

Oroville angler, Alex Klein rose to the runner-up position with 10/10 that went 25.02. Klein – a recent college graduate – shared he had been fishing team tournaments on the lake with his father since he was 10-years-old and attributed his success to his local knowledge.

“The first day, the rain started and the lake probably came up 10-ft by the second day,” recalled Klein. “So, just knowing where to go when a drastic amount of water comes in like that really helped me move up in the standings.”

Due to the changing conditions, Klein’s target areas and patterns varied day-to-day.

“I started out working bigger flats with isolated boulders and chunk rock in 10- to 15-ft,” he revealed. “I looking for those fish that were getting ready to move up and spawn and on the second day with so much water coming in, I got on the bank and fished really shallow. The fish really pushed up and my bites were coming in five (feet) or less.”

A trio of baits lured Klein’s weigh fish. Day one, the primary focus was a clown pattern ripbait. The second day was equal parts ripbait and white, willow-leaf spinnerbait, with his big bass (just under 5-lbs) biting an umbrella rig. His rig was armed with 3.8 shad-colored Keitechs.

“The fish weren’t eating too aggressively,” he said. “You really had to slow it down. With the ripbait, you had to twitch it slowly. They ate it on the pause.”

He noted that although the weather was brutal, he had fun trying to figure out how to persuade the fish to bite.

Klein claimed $7,500 for his Oroville finish.

Tom Shimabukuro of Oakland believes that concentrating on less-pressured, super-shallow areas gave him an edge in finding his daily stringers that totaled 23.21.

“I abandoned the idea of dragging baits and deeper stuff,” Shimabukuro explained. “The water was rising and it was dirty; so I thought the fish would go to the bank. I would say 75 percent of my fish came under 5-ft. and all of the bites came from a bump or a point, never in the back of a cut. Sloping banks were noticeably better.”

His game plan included a two-pronged program – a multi-arm rig with shad-colored swimmers and a single 3-inch Megabass Spark Shad swimbait in “Real”. He modified the Spark Shad with a chartreuse tail and when his water muddied, he moved to brighter white plastics on his rig.

“My approach was a steady crank; but it was a slower retrieve,” he explained. “This isn’t how I usually fish an A-rig. The key was hitting the bank and reeling at a speed that kept it at the same angle as the bank. My rod (a Megabass Levante F5711) was important, because of the long, long casts it allowed me to make.”

Changing conditions over the course of the two days played havoc on Shimabukuro’s bite.

“Fishing was definitely tougher on day two,” he said. “I only had two fish at noon and started to panic, but I decided to stick it out and it paid off for the nine pounds that I got.”

Shimabukuro banked $5,500 for the weekend on the water.

Berkley angler, Josh Kaneko kicked off the event with an impressive day one limit of 15.98, leading the co-anglers by more than 4-lbs. Although challenged by the second day’s conditions, Kaneko claimed the co-victory with a final weight of 22.18.

The first day, Kaneko capitalized on a shallow, morning time umbrella rig bite that he found in practice. “I was very fortunate to be around a good grade of fish with my day one pro Cody Remick and my first three bites of the day were all largemouth bass; so there was some luck involved,” he said. “Everything completely changed the next day. There was a torrential downpour Saturday night, raising the lake at least 6- to 8-ft. There were actually exposed rock piles that were concealed overnight.”

Day two was more of a grind for Kaneko. Early bluebird skies kept his reaction bite at bay. It returned with the cloud cover later in the day.

He noted that current and stained water were factors in his productive areas.

Kaneko’s limits came on two lures– a five-wire custom rig with shad-colored, 3.8 Keitechs and a 2.8 Keitech fished as a single swimbait also in a shad pattern.

Kaneko collected $5,750 for his feat, including $250 in Yamamoto contingency dollars.

The Run and Win with Lucas contingency program paid $1,000 to Chris Raza and $500 to Mark Rauenzahn.

The Yamamoto Toad of the Day honors and $500 was caught by Jason Cordiale pro (4th) and David Young co (3rd), for the biggest bass on their respective sides.