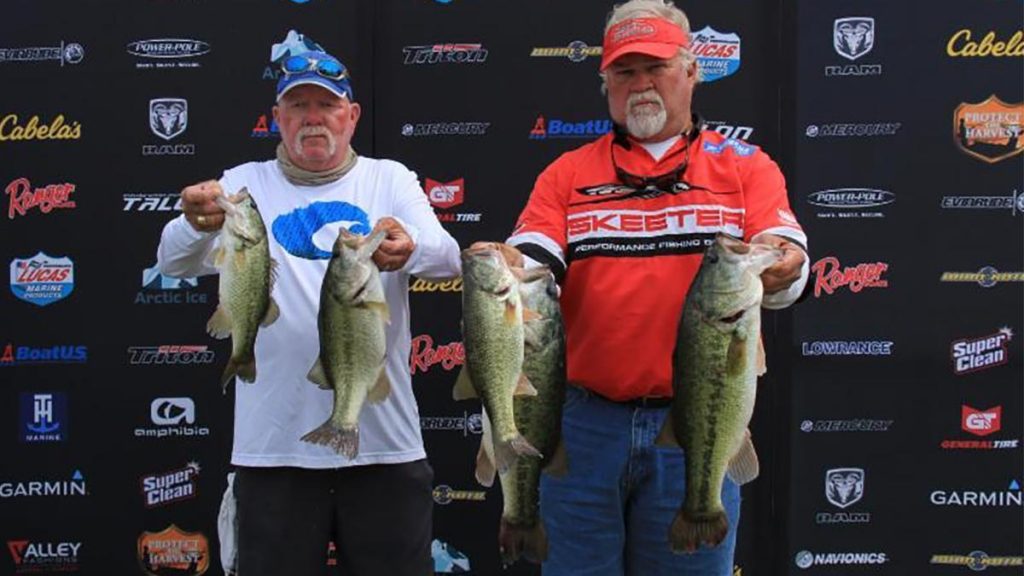 Ricky Campbell and Donnie Robinson walked away with a prize package worth more than $51,000 for winning the championship event of the 2016 Texas Team Trail presented by Cabela’s on May 15 on Lake Ray Roberts. The anglers’ winnings included a fully rigged Ranger Z519 with a 225HP outboard, an additional $1,650 of Anglers Advantage cash and the $635 Big Bass Award for a total prize package worth $51,785.

Mid-May is a transitional time for bass on Ray Roberts. High winds and stormy weather answered the question of where the bass would stage during competition. The anglers committed to the shallow-water bite and experienced productive pre-fish outings.

“We found those fish about a week before the cutoff,” said Campbell. “They were just choking a jig in practice. I had one day in practice where I caught 29 pounds myself.”

The team headed south during day one and found solid bites.

“The fish were just feeding – ambushing shad and crawfish,” said Campbell. “We caught five limits of fish the first day. We could’ve had 35 pounds if not for a few lost fish, but that happens.”

After bringing in 24.49 pounds of bass, the anglers sat in second place. Day two found the anglers returning to their productive area – a willow-laden spot where they pulled bass from four to eight feet deep.

“This is one of the later spawning areas on the lake,” Robison added. “By Texas standards, it has been cool recently and the fish hadn’t left the area yet. When it was cloudy, the fish were away from the willows. When it was sunny, they were in the willows. That first day we’d pitch to the willows and then our bites would come five or six feet away.”

The bite on day two slowed with the anglers only receiving five bites but managed to boat all of them for a full limit. Their day two bag of 18.41 pounds shot them past the struggling team of Batson and Greer with a total of 42.90 pounds.

“It took us all day to get five bites and we got them all in the boat,” said Campbell. “We knew that if we got five bites from that area they would be five good fish. Coming in, we still didn’t think we had enough.”

Second-place finishers Lee Batson and Jason Greer failed to duplicate their day one success and only boated four fish on day two for an overall weight of 36.49 pounds. Although the team slipped down to second, they were happy to finish high enough to win a new Ranger boat.

“We’re absolutely blessed to finish second,” said Batson. “We thought we had given the boat away with only four fish. We’re so excited to finish the year in such a strong fashion.”

Second place would normally award the anglers a new Ranger Z518, valued at $34,000. By participating in both Ranger Cup and currently having an Evinrude outboard, the anglers upgraded to win a Ranger Z519 with an Evinrude 250HP outboard. Overall, the anglers took home more than $50,000 in winnings.

Like many anglers, third-place finishers Stephen Johnston and Danny Iles planned to fish offshore. With the strong front coming in, the anglers moved to the shallow waters. The team threw spinnerbaits, swim jigs and an occasional wacky rig.

“This one hurts in the pocketbook,” said Johnston. “We did everything we’re supposed to do. We didn’t lose any fish. It hurts, but we couldn’t have done anything different.”

Tenth-place finishers Russell Cecil and Todd Castledine won the Lucas Oil Team of the Year Award for a second time, which delivers the anglers each a set of custom rings, courtesy of Lucas Oil, and paid entry fees to TXTT 2017 events.

For additional information, anglers are encouraged to call 210-788-4143 or check out the TXTT website at www.texasteamtrail.com. Site visitors can register for events, review the television schedule, get official Texas Team Trail gear, view results and learn more about what’s in store for 2017.