Bass fishing flutter spoons are major producers throughout the summer months. As post-spawn bass make their way towards their deep, summertime haunts, these curved slabs of metal have a special way of fooling some of the biggest fish in a given fishery.

There are certain situations, however, in which the bass aren’t willing to attack an oversized spoon. This is exactly when the “double spoon rig” shines brightest, according to Elite Series pro Jeff Kriet.

Most flutter spoons are fairly large with many measuring between 6 and 9 inches in length. They’re heavy, they cast well and are known for catching huge bass. But when the fish are in a negative mood or feeding on smaller forage, these bigger spoons can lose their effectiveness.

Common sense tells us to simply downsize our offering to a smaller 4 or 5-inch flutter spoon, but the decrease in size poses a very real problem: They’re terribly difficult to cast.

“It’s like trying to cast a potato chip,” Kriet said. “To combat this issue, I’ll take two smaller spoons and lay them on top of each other. Once I put the split rings on and add the hook, I’ll have a more compact profile that casts like a bullet.”

The increased castability of the double spoon rig allows you to keep a healthy distance from the bass and cover deep structure and cover at a rapid pace. The bass won’t be spooked by your hull slap—waves hitting against the hull of your boat—and instead of helicoptering and behaving like a wounded duck in the air, the spoons will be much more streamlined. 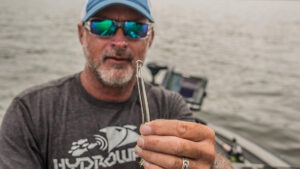 “When you’re throwing a single spoon, there’s a lot of surface area that creates drag in the air,” Kriet said. “If it’s windy, you’re going to have a hard time getting it where it needs to go. But when you combine two smaller spoons, they’ll separate a little more in mid-flight which reduces drag and cuts through the air much better.”

Many of the world’s most accomplished anglers agree—a lure’s rate of fall is one of the most overlooked aspects of bass fishing. The double spoon rig gives you an opportunity to tinker with the ROF and elicit reaction strikes from inactive bass.

“When the bass aren’t on a major feed, we’re often tempted to show them something more subtle,” Kriet said. “But doing the exact opposite can be hugely advantageous. If that lure falls quickly right in front of their nose, they’ll attack it out of pure instinct, even if they’re not actively feeding.”

Think of it like a game of catch: If I ask you if you would like to catch a football, you have the option to say “no”. But if I randomly throw it to you, you’re going to catch it. The increased ROF of the double spoon rig does something very similar to bass. They don’t have much time to decide whether or not to eat it. It drops in front of their face and they can’t help themselves.

A single flutter spoon doesn’t create much noise in the water; it displaces water and emits pressure waves instead. In situations when a bit more drawing power is preferred—if the bass are tucked tight into cover or you’re fishing stained water—a double spoon rig can pay big dividends. 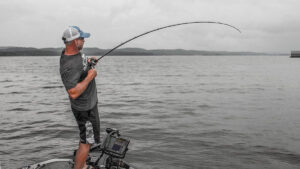 “When I’m popping and ripping the double spoon rig along the bottom, the two spoons will clack together and allow the fish to find it easier,” Kriet said. “It can draw them out of nearby deep trees and brush piles and help them track it down in off-colored water.”

When the time comes to fish deep this year, make sure you have a few double spoon rigs in your boat. Not only will you be able to be more efficient in terms of covering water, but you’ll also be able to catch more big bass.