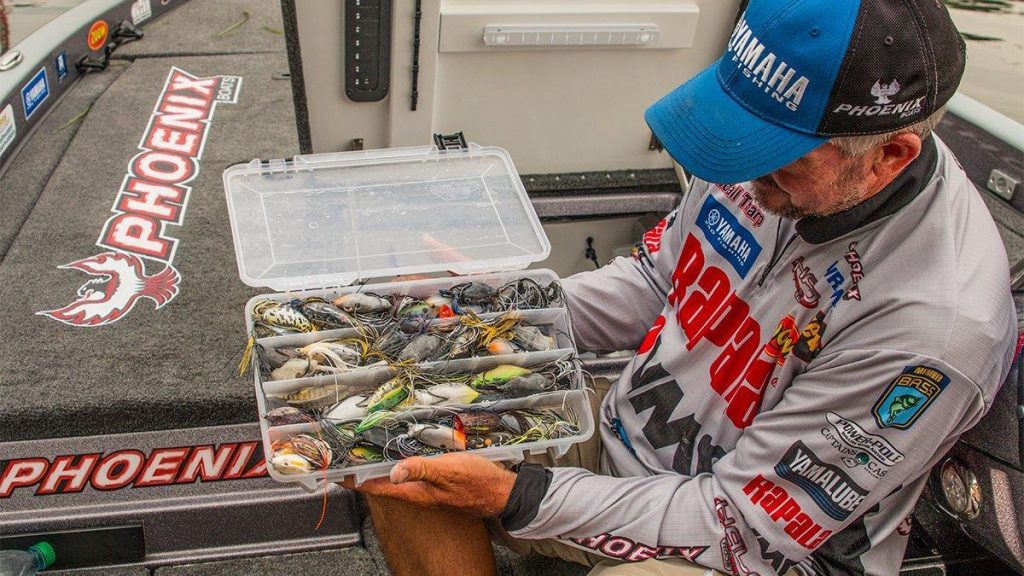 Bass fishing tackle is expensive; just a quick trip to your favorite tackle store can cost a few Benjamins these days. So anytime we run across a money-saving tip for fellow anglers, we’re sure to share it as quickly as possible.

Elite Series pro Randall Tharp is one of the best topwater frog anglers on earth, but even he’s not immune to the common frustrations we all face when storing and maintaining these pricey bass fishing lures.

“Most of the silicone legs on frogs will stick together after a single day of fishing,” Tharp said. “I don’t know if it’s the heat or the type of water, but they’ll melt and adhere together like those old-school spinnerbait skirts and totally ruin the frog. I have several prototype frogs that won’t be released for several years and I absolutely have to keep them in good condition because I can’t get any more of them. Messed up legs aren’t an option.”

Even if you don’t have rare prototypes in your frog box, store-bought ones aren’t cheap. With many high-end frogs selling for $15, the average angler can’t afford to re-stock their frog collection multiple times per year.

“We should never underestimate the power of fluid, free-moving legs on our topwater frogs,” Tharp said. “When you pause the bait and it’s sitting still, those legs will quiver and expand, which generates a lot of additional strikes throughout a day of fishing. If the legs are constantly stuck together, your frog won’t walk right and looks very unnatural to the bass.”

After talking with Elite Series pro Chad Morgenthaler, Tharp discovered a simple way to win the battle against mangled frog legs. It might sound strange, but it works wonders. 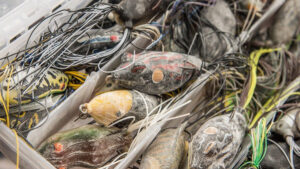 “I started putting baby powder in my frog box,” Tharp said. “It absorbs any water and allows the legs to stay flexible and separated for a long, long time. I’m catching up to 100 bass on a single frog since I started using this trick.”

He doesn’t scrimp on the powder, either. A quick look into Tharp’s frog box will reveal sizeable deposits in the bottom of each tray. Whenever he puts a wet frog into the box, he’ll shake the container for a few seconds in order to re-coat the newly added amphibian.

Doesn’t it make the frogs stink?

That was my first question, too—I’d rather my frog box not smell like a nursing home. But according to the Elite Series champion, you won’t notice any impact on your number of bites. 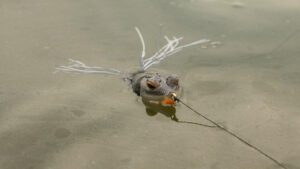 “The powder washes right off the frog,” Tharp said. “After I tie a freshly powdered frog onto my line, I’ll slap it on the water a few times and it’s as good as new. If the thought of powder on your frogs really messes with your psyche, I’d suggest spraying a little BANG shad/crawfish combo on it before making your first cast. But again, if there were any ill effects, I wouldn’t be suggesting it.”

So there you have it: The power of baby powder. For just a few bucks, you can save a lot of money and frustration while keeping your frog legs in tip-top shape.