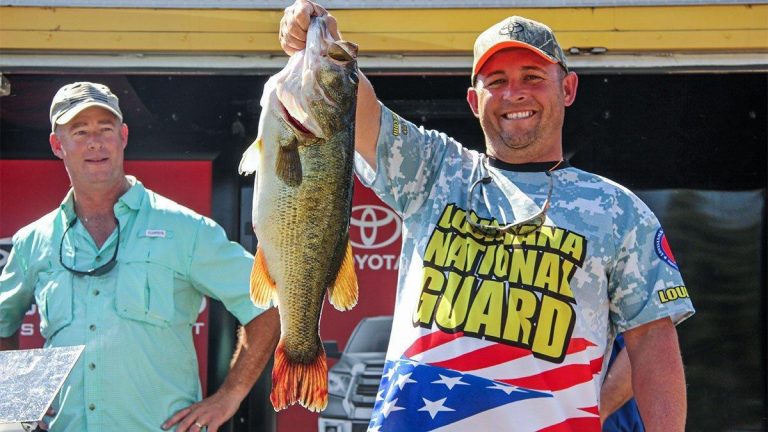 When 39-year-old Shannon Ordner stood on the B.A.S.S. stage during the Toyota Bonus Bucks Owners event on Toledo Bend a few weeks ago, fellow anglers got an eyeful of what’s great about America in the form of a 9-pound, 6-ounce largemouth being held by a military veteran wearing a giant smile—and lots of red, white and blue.

The Toledo Bend beast ate a white and black SPRO Bronzeye Frog Jr. at 7:25 a.m. in 2 feet of water and fell just a frog’s hair short of the Toledo Bend Lunker Bass Program’s magical 10-pound mark. Ordner would have qualified for a free fiberglass replica mount from the program, but that was of zero detriment to the Louisiana resident’s excitement.

“This is the biggest bass of my life and I caught it in the most high-profile event I’ve ever fished,” smiled Ordner. “I’ll never ever forget this day.”

And then came perhaps the most punctuating comment of the magical day when Ordner was asked why he wears a tournament jersey touting “Louisiana National Guard” in big, bold yellow letters.

“I’m not a serious tournament angler, I don’t fish any trails, but I do love Toledo Bend and my country. This shirt is a matter of pure pride,” said Ordner, a father of two, who has spent 16 years in the Active Army and additional time in the Active Guard and Reserves with the Louisiana National Guard.

“Over the past 20 years, it’s been an honor and a privilege to serve my country,” Ordner said. “It has honestly made me the man I am today and I’ve met and served with some amazing people that are like brothers and sisters. Terry Gilcrease was my fishing partner today and he and I met in the Louisiana National Guard.

“I was in Iraq in 2004 and 2005 with 5-5-ADA and then served in Afghanistan in 2010 and 2011 with 2-44-ADA. I was fortunate I made it home without any physical or mental scars, and I work now as a recruiter for the Louisiana National Guard,” explained Ordner, who has purchased three Toyota trucks since 2012.

“I own a 2015 Tundra Crew Cab right now and it’s just such a comfortable ride with a ton of towing power. As far as I’m concerned, it’s the most American made truck on the road—it’s built in Texas. I’ll never forget this bass and I’ll never not own a Toyota.”

Ordner’s 9-pound, 6-ounce bass was the biggest of the 4th Annual Toyota Bonus Bucks Owners Tournament and it came with a mighty amount of memorable American pride for all who watched him weigh in.