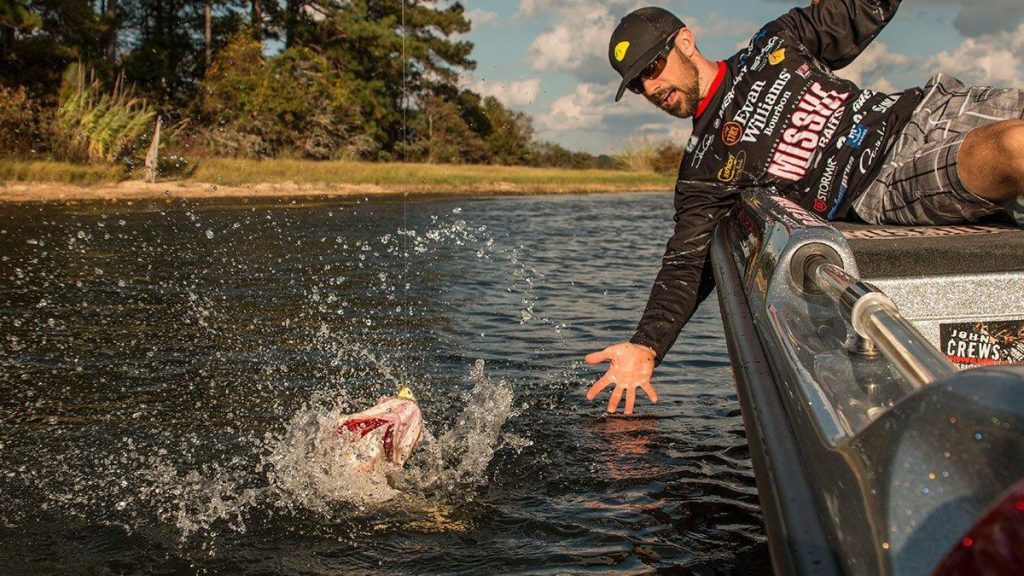 As the days become shorter and the water begins to cool this fall, something special happens in fisheries around the country. Shad, a favorite food source for bass, begin their annual migration to the backs of creeks and pockets in search of fresh runoff, plankton and better-quality water conditions.

This biological phenomenon creates an ideal scenarioâ€”a perfect storm, of sortsâ€”for the savvy crankbait angler. The shad are pinned into predictable, easy-to-ambush areas, the bass are specifically focused on the profile of baitfish and of course, crankbaits allow anglers to cover an astonishing amount of water quickly while searching for these nomadic fall bass.

According to Elite Series pro and cranking extraordinaire John Crews, there are five types of areas you need to target the next time youâ€™re on the water. If you can find similar areas on your local body of water, youâ€™d better get ready for some insane fish-catching action.

A quick guide to color selection

Before delving into the specific hotspots, itâ€™s important to understand the importance of color selection in order to maximize your success. Without the proper color patterns, both the quantity and quality of your catch will be limited.

Of course, youâ€™re going to be focused on matching the natural color patterns of shad throughout the fall; but itâ€™s not always as straightforward as rigging up a shad-colored crankbait and going to town. Crews believes that even the smallest color adjustments can make an enormous difference, so he keeps three types of color schemes ready at all times.

â€œThere are three color variations on which I rely throughout the majority of the fall,â€ Crews said. â€œOne is a shad/white combination, such as SPROâ€™s Cellmate and Nasty Shad colors. Theyâ€™re opaque colors, so I stick to these when Iâ€™m fishing in 1 to 3 feet of visibility with a little bit of stain. Iâ€™ll also have a flashy color rigged at the same time, such as a Citrus Shad or Chrome Olive. But when Iâ€™m fishing an area with less than 2 feet of visibility, itâ€™s hard to go wrong with a Chartreuse/Black Back-colored crankbait.â€

Thereâ€™s a lot to be said for constant color changes when cranking for fall bass. After catching several fish from an area, the bass often become conditioned to your particular color scheme which results in a reduced number of bitesâ€”itâ€™s a frustrating conundrum with which most anglers are familiar.

â€œA school of bass can turn off like a light switch after you catch a few,â€ Crews said. â€œSo thatâ€™s why I always show â€˜em several different colors before leaving an area. A small color change can reignite the same group of fish and double your catch in a hurry.â€

Hotspot No. 1: Back flats

The shallow flats located in the backs of major creeks are a favorite for Crews throughout the autumn months. Although widely overlooked and avoided due to snag-inducing cover and depths that are seemingly â€œtooâ€ shallow, these areas need to be on your radar. 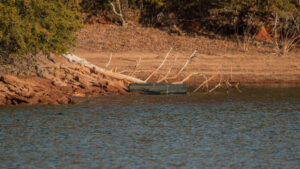 â€œBig bass love to herd schools of shad onto these flats,â€ Crews said. â€œThe shad have nowhere to escape, creating an easy meal that requires very little energy exertion. Any type of cover you can find on these flatsâ€”a single log, a basketball-sized rock or even just one stumpâ€”will generally hold a bass.â€

Repeated casts prove to be a major factor when fishing this isolated cover. Even on high-pressure days when bass fishing may not be at its best, Crews has had excellent success by making four, five and sometimes even ten casts to a good-looking piece of cover.

â€œIâ€™ll take a Fat John 60 or Baby Fat John 50 and beat these pieces of cover to death,â€ Crews said. â€œRemember, big bass are fairly lazy, so theyâ€™re not always going to be the first ones to jump on your lure. But luckily, with enough casts, you can irritate them into biting.â€

Just as springtime bass stage before moving to the shallows to spawn, fall bass utilize very similar areas before comitting to the backs of creeks and pockets. These areas are easy to find and even better, theyâ€™re known for replenishing throughout a day of fishing.

â€œThe first major points coming out of the backs of pockets are absolutely textbook places to find migrating shad and bass throughout the fall,â€ Crews said. â€œI use a Little John XL and an original Little John to cover the 3 to 8-foot depth range. Again, youâ€™re looking for any type of isolated cover that a bass can use as a strategic ambush pointâ€”even if itâ€™s just a small rough spot. Youâ€™ll usually just catch one fish from each of these areas, but you can come back a few hours later and catch another one.â€

Riprapâ€”long stretches of bank covered with chunk rockâ€”is a popular target for bass anglers throughout the country. Regardless of the time of year, these banks always seem to play host to big bass. As the fall shad migration begins, however, riprap becomes an even bigger player than normal.

â€œYouâ€™ll find a lot of bridges in the backs of creeks and of course, these bridges are covered with riprap,â€ Crews said. â€œIf you think about it, these are awesome congregation areas for both the bass and the shad. We know theyâ€™re working their way to and from the backs of the creeks and if a bridge is in their way, they have to swim underneath the bridge to complete their migrationsâ€”they have no other choice. So essentially, these causeways bottleneck the activity and become incredible options for fall crankbait anglers.â€ 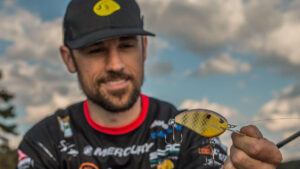 Although youâ€™ll probably catch some fish with a traditional shallow crankbait targeting the 3 to 5-foot depth zone, Crews has discovered the power of differentiation. Riprap is no secret, so it gets fished a lot by other anglers. But targeting a different depth zone can yield great results.

â€œYou can do some serious damage on these riprap walls by targeting the 6 to 8-foot zone,â€ Crews said. â€œThose fish hardly see any lures, so theyâ€™re much easier to catch and you can go behind other people and mop up what they leave behind. Iâ€™ll parallel these long stretches of riprap with a Little John XL and focus on any irregularity such as small points and indentations, patches of vegetation or even a washed-up log. It doesnâ€™t take much to hold a larger-than-average fish.â€

Many lakes have fall drawdowns in which the water is dropped several feet from full pool. Fishing in these conditions can be frustrating due to the lack of available cover in the water, but you can actually use turn that irritation into an advantage.

â€œIt can be hard to find cover in the water when a lake is down,â€ Crews said. â€œBut if itâ€™s hard for you, itâ€™s just as hard for the bass. So when bass find a piece of cover, they will gather around it in big numbers. I look for the last docks in the backs of pockets with some sort of water around either the front posts (wooden docks) or floats (floating docks). Youâ€™d be shocked by how many bass will hold on a single dock.â€

Once he locates these docks, Crews runs a Fat John 60 or Baby Fat John 50 down each of the sides while purposely colliding his crankbait with each individual post to elicit a reaction strike. If it happens to be a floating dock, heâ€™ll cast at an angle that allows him to â€œsteerâ€ his lure under the corner of the float.

â€œWe keep talking about the importance of repeated casts, but itâ€™s also important when youâ€™re fishing these docks,â€ Crews said. â€œIâ€™ve seen dozens of bass under similar docks in the past, so even if you catch one from a specific post or float, make a few more casts because another fish might have taken its place.â€

Weâ€™ve all heard the term â€œdo-nothing banksâ€. These stretches of water look terrible to the naked eye and go against everything youâ€™ve ever read about bass fishing. But donâ€™t give up on them this time of yearâ€”they can totally surprise you.

â€œA lot of times when youâ€™re fishing, youâ€™ll see 200-yard stretches of bare, ugly-looking bank,â€ Crews said. â€œIn the fall, you can take a Little John to these banks, turn up the trolling motor and just go. Youâ€™re very likely to catch a fish off of absolutely nothing right now because the bass are just wandering around looking for an easy meal.â€ 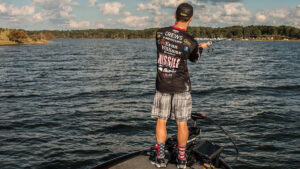 In addition to taking advantage of the gypsy-like behavior of the bass, these bare banks also allow you to fish totally unmolested water and have a productive pattern all to yourself.

â€œNobody fishes do-nothing banks,â€ Crews said. â€œIâ€™ve actually run this pattern many times in tournaments and had some really nice finishes. And man, if you run across a random little rock pile or something that you didnâ€™t know about, you can catch some absolute giants.â€

The next time youâ€™re targeting fall bass, make a concerted effort to target these bass fishing hotspots. Take note of your color selection and tie a good knot because youâ€™ll be around huge numbers of quality bass.