A bobber, a hook, a split shot and a worm. It’s how many of anglers get their start in fishing. Fishing for panfish like bluegills, red ear sunfish, perch, and even crappie is enjoyable and plentiful, at least it is for most folks that pursue them in the spring. But folks often quit fishing for them after they leave the shallows and move to their offshore haunts in early summer through the next spring. But fishing for bluegills offshore can be as good or even better than fishing for them shallow.

There are several things to consider when looking for panfish like bluegills and big shell crackers away from the bank. Everything from water clarity to habitat can help you predict where the big panfish will regroup and congregate away from the bank after they leave their shallow spawning areas.

I recently spent a day with Bill Taylor, Director of Tournaments at FLW, and one heck of a good panfish angler. Many anglers across the country know Taylor as the Tournament Director for the FLW Tour and all the FLW Outdoors circuits. But many anglers probably don’t know what an accomplished angler Taylor is in bass fishing circles. At one time he held the record for the most BFL (Redman) wins, north of 20 as rumor has it.

One thing I’ve learned from all my travels in cover the sport of fishing and seeking out fish across the globe, a good angler is a good angler. Doesn’t matter if they are going after crappie, bluegills, bass or tarpon. If they get good at one species or aspect of angling, they generally borrow and apply that expertise to all their fishing pursuits.

Taylor begins his search after the spawn on hard clean bottoms on high spots, rises and humps on the edges of creek and river channels. The bluegills and big red ear sunfish will move out of spawning areas and look for places to regroup and forage.

On a TVA impoundment like Kentucky Lake, shell beds offer big panfish a great habitat to forage on muscles and snails on said shell beds.

Read How to Use Sonar to Find Hard Bottoms 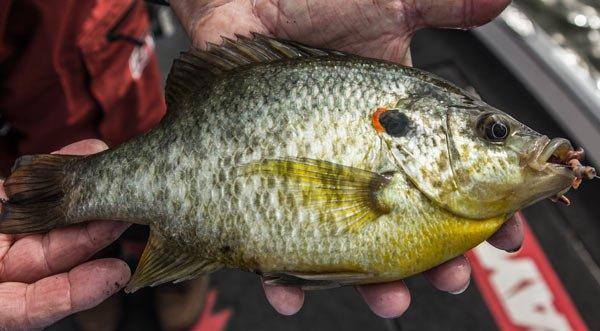 “I really study my graph and just ease up and down the ledges like I was bass fishing looking for hard bottoms, shell beds and of course evidence of bluegills,” Taylor said.

What he has found is the better sized bluegills and red ears migrate quickly away from the banks. The smaller bluegills will stay and hang out around docks but the big ones move out to the main river almost overnight after the spawn and spend the rest of the summer and fall there before migrating again through the fall and into the winter.

He’s not looking for hundreds of bluegills but rather wads of them spread out along a hard area. And water clarity can often put the fish shallower or deeper. When it’s real clear the fish will go deeper and suspend more. When it’s darker and dirtier, the bluegills tend to go shallower and stay closer to the bottom. So a lot of times he moves into a hard spot area and then fishes around trying to cover small patches of water on the hump until he starts catching good keepers.

“Sometimes I might drop 5 buoys on a single hump as I mark the bluegills on my sonar or hook into a big one just fishing around on the hump,” Taylor said.

Quick Tip: A short dropper on your drop shot weight seemed to be more beneficial for bluegills foraging on hard bottoms. We like a the hook to be about 3-6 inches from the weight.

Probably the most enjoyable part of spending a day learning Taylor’s technique for catching big bluegills this fall was the simplicity of his approach. One small spinning rod and reel, 4-pound test line, 1/8- to 1/4-ounce drop-shot weight and a No. 6 Aberdeen hook. The whole rig is setup like a drop shot, except instead of plastic worms he adds live red worms.

Making short casts is key because light line and light action rods don’t lend themselves to good hooksets on long casts. After the drop shot weight hits bottom, he begins a short popping of the line with his rod tip. Nothing overly erratic. Just enough to draw the attention of the bluegills.

As they start pecking, simply pull up on the rod slightly, and if there is a bit more tension, set the hook. If you miss on the hookset, drop it back and start shaking it again until the next bite happens. One red worm might last you through 4-8 big bull bluegills.

We hit several humps in a day and found that revisiting a couple humps later in the day paid big dividends. We took a few nice keepers and a lot of small non-keepers off the first spot we hit that morning. There was a 20-degree temperature drop and Taylor noticed the schools were a lot bigger. Meaning a lot of smaller bluegills were grouping up with the big bulls.

We hit several more spots and visited that first hump again later in the day. We meandered around on the hump watching our sonar and dropping on groups or “clouds” as they often appear on the graph. We hit two nice big bulls in a row and dropped the marker buoy and it was game on. We boated 30 big keeper bluegills from that spot as fast as we could cast. 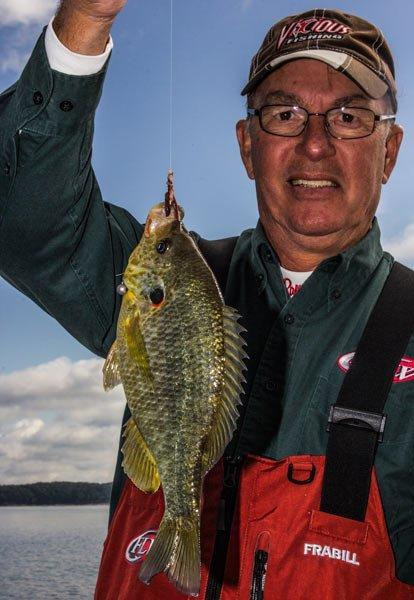 We cleaned 60 big gills, some big red ear and a few yellow bass. However when we filleted them out we checked the gullets of a few fish and found them stuffed full of small snails and muscles. Further confirmation that finding those hard shell beds, which are typically on high spots on a river or creek channel ledge or swing.

Another observation, a lot of the bluegills came near brush piles, stumps or big rocks. They weren’t in the cover necessarily but they were in those high percentage cover areas on those hard spots. So if you find a good shell bed or hard bottom on a high spot, and it has some other cover on it, you’re probably going to find some big gills nearby. 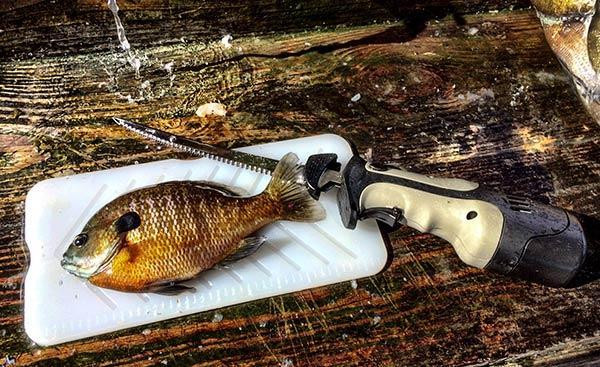 While scanning ledges in the late spring and early summer, Taylor kept seeing small groups of fish hunkered on hard bottom humps near creek and river channel ledges. He would throw his bass lures in there and not catch those fish.

“I finally said to myself, ‘I’m bringing a tub of red worms out with me next time and see if those are catfish, yellow bass, bluegills or what,’” Taylor said.

Turned out his pursuit of bass lead him to a relatively untapped population of big bluegills. Now he’s become quite adept at following the big panfish offshore and staying with them for several months of freezer-stocking action. 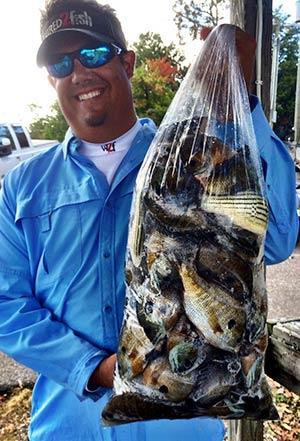