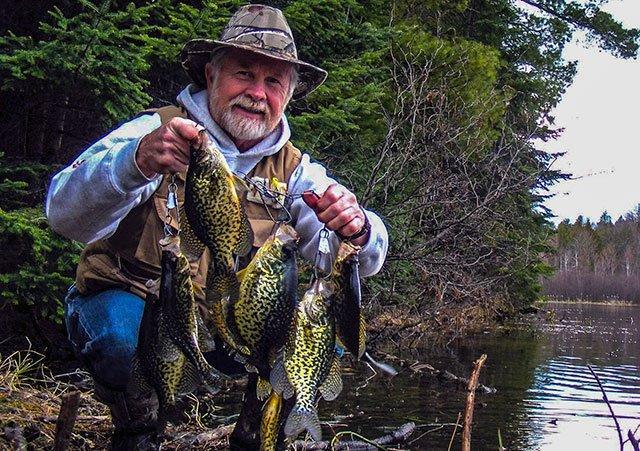 The safe ice is gone or going fast. But even the glow of late-ice panfish action starts to lose its luster once you get that first sniff of early spring panfish river fishing and the arrival of the open water season in the northern tier.

Avid panfish anglers start pursuing bluegill, crappie and the rest of the sunfish family early and often once Nature has lifted the ice cap from their waters. The successful ones stick with the same type of baits and vertical presentations they used on the ice. Action can be fast, but the challenges of finding fish, staying with them, and dialing in to their bait preferences requires a little knowledge, experience … and connecting the dots.

Northern panfish specialists opt for one, or both, of these early season strategies: 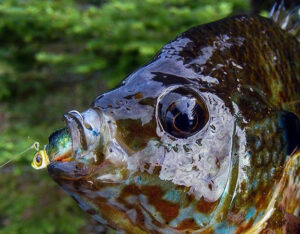 Don’t stash those ice fishing lures yet! Water temperatures won’t be dramatically different at ice out from what they were below the ice the week before. Besides, the same baits that served you during the late ice bite will work just as well at ice out – and for much of the open water season, for that matter.

Greg Clusiau, recently retired guide who prowls the 1,000-plus waters near Grand Rapids in Itasca County Minnesota, for his panfish, continues to use lures like the Mayfly, Stonefly and Water Bug in the Impulse line of scented plastics from Northland Fishing Tackle on tiny jigs – combinations that work consistently through the ice season when panfish feed heavily on plankton, insects and other invertebrates.

“I like black on black,” says Clusiau. “A black Mayfly on a black 1/64- or 1/32-ounce  Northland Gumball Jig is really a hot combination. And I really like orange jigheads, which often seem to be the best for bluegill and crappie.”

Small supple plastics – “almost like miniature bass baits” – that deliver subtle action when nearly motionless and also emit scent are his bread-and butter baits. He primarily fishes them alone  on a jig, though he sometimes adds a wax worm for added flavor.

Fishing them below a stationary or slip bobber, a.k.a. float, not only helps maintain depth control but also mimics the very slow vertical presentation of the ice angler. And slow is what it’s all about.

“Fish are still lethargic at ice out,” notes Matt Johnson, panfish expert, guide and founder of the Minnesota-based Ultimate Panfish League. “You still want something small. I continue to use the 1/64- and 1/100-ounce Mooska or teardrop jigs with tiny plastics that worked through the ice.”

Johnson often opts for the soft ice fishing plastics of Makiplastic. They come in a wide range of shapes that resemble the micro foods the panfish feast on through the ice and throughout the open water season.

Both men will suspend their baits from weighted bobbers, though Johnson, a self-described “horizontal guy,” fishes his small jigs without a float whenever he can fish so effectively.

Johnson opts for the Thill Mini Stealth with a small weight pinched at each side of the float; Clusiau for the Rocket Bobber. Both enable longer casting distances.

Clusiau takes a stair-step approach to his early panfish angling.

He begins fishing from the bank on small “basin lakes,” usually waters of 50 to 100 or more acres with dark shallow bays and murky water. They were the first to freeze, and they are the earliest to thaw.

“These dark bays have a lot of insect life in them and, often, a lot of wood and vegetation,” he says.

He likes swampy areas that transition from lily pads to submerged vegetation. “If there’s wood sticking up, all the better!” he adds.

Some have boat access, but others do not. Not to worry! Boots or waders will get you to the fish more effectively than a boat as often as not on these waters at this time of year.

The “old north side of the lake” principle, applies, too, on each water as sunlight and southerly winds tend to warm these areas first.

Clusiau stopped counting the number of lakes he has fished in Itasca County when he hit 300, but he has noted such consistency in the pattern of panfish activity on local waters that he is now able to tune in to the peaks of most of them with eerie accuracy.

The timetable for panfish activity on larger, deeper lakes with hard bottom will lag behind the small waters. “But each lake is its own animal,” he emphasizes, noting the importance of experience and keeping mental or written notes on waters from season to season. “No two are the same.”

During the late ice period, he has found his bluegill and crappie close to the weeds. “They will be near the weeds at ice out, too,” he says.

He fishes timber, too, both deadfall and beaver huts.

“Beaver houses are excellent,” he says. “I really love to fish them!”

Warming water is the key to panfish location in spring, notes Matt Johnson.

“The key in early spring is location, and I always pay attention to temperature more at this time of year,” he says. “Even a couple degrees in water temperature can make a difference.”

Johnson notes the location of deep water panfish during late ice and combines it with his recollection of the early spring feeding and spawning areas from prior seasons. Taking that knowledge to the water at ice out offers big benefits.

“The transition movement is the same every year,” Johnson explains. “You can intercept these fish as they move from the deep water to the basin. A lot of times, I will check and find them at the first break. Sometimes you can draw a line from where you know the fish are right now on the ice and where they will be later in the spring. I just look for them between those two spots.”