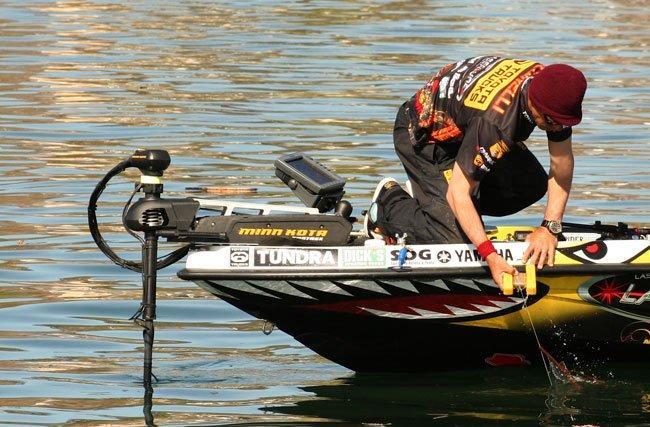 Forgive Mike Iaconelli for talking on the phone while eating. He has a very busy schedule, and his only chance to talk about marker buoys was amidst bites of cheeseburger in the Minneapolis-Saint Paul International Airport before boarding a flight home to the family he loves dearly.

Other than the fact that he was chewing in my ear, what became admirably obvious is that Iaconelli’s passion for teaching others about fishing is thicker than Heinz ketchup. Even when he’s talking about something as seemingly simple as marker buoys, Iaconelli teaches with genuine excitement.   And in this case, excitement was being delivered between each bite of beef.

â€œMarker buoys are super key! Ridiculously key, dude,â€ said Iaconelli, in a tone that hinted this discussion about four-dollar hunks of floating florescent plastic wasn’t going to be a yawner.

â€œIt’s the best, most important, inexpensive, piece of equipment you can own as a bass angler. I learned as a kid fishing from a jon boat that there’s always a sweet spot on the lake bottom, and a $4 marker buoy is the greatest tool there is to help with what I call â€˜narrowing the window’ down to that sweet spot.

â€œLet’s say you’re faced with fishing a huge 60,000 acre reservoir during this time of year. It’s hot. It’s summer. You know you’re looking for humps and ledges near deep water. Finding that one magical hump that’s half the size of a hockey rink amid 60,000 acres of water is a serious task in â€˜narrowing the window’. But once you narrow it down to the hump or ledge, then you’ve got to find the sweet spot on the hump or ledge.â€

Iaconelli defines the sweet spot as anything on the structure that’s different than the surrounding substrate, such as a single large boulder, a stump or perhaps a patch of rock or gravel on an otherwise soft muddy or sandy bottom.

â€œOnce I’ve located the hump with my electronics, I drop the first buoy simply as a marker to identify its basic location. Then it’s time to start searching with rod and reel,â€ he said. â€œI cast a Carolina rig, a football jig or a DT16 crankbait to get a precise feel for the bottom. I’m looking for that one little patch of something different that not even the best electronics in the world can detect because it literally has to be â€˜felt’ by the angler.

â€œOnce I feel something different, or catch a fish, I immediately drop a second marker buoy right in front of my trolling motor â€“ sometimes I actually toss out the buoy while I’m fighting the fish. That second buoy becomes my point of reference as to where I need to position and hold my boat.   I don’t want my second buoy to land on top of the sweet spot, or the school of fish, but simply to provide a reference point for where my boat should be setting for each cast that follows. Even if you drop a waypoint, only that marker buoy can offer a precise visual reference to know exactly where each cast needs to land.

â€œMarker buoys are reference points. That’s their job. And they’re not just for deep water or clear water. I use them nearly everyday that I’m on the water, including rivers, shallow water and muddy water.   As a kid I rarely fished a lake that was deeper than 10-feet. So I learned to drop a marker buoy on a creek bed depression that might have only changed 10-inches in depth â€“ but sure enough, that’s where the fish would be hanging â€“ right there on that little 10-inch drop.â€

Iaconelli admits that even after he’s dropped the second marker buoy and tagged it with a waypoint, his work is not done.

â€œOnce I get off the water at the end of the day, a lot of times I make written notes on a lake map, or in a note book.   For example, I might mark that waypoint No. 251 contains a large boulder where the bottom drops from 9 to 11 feet on the southwest corner of the hump.

â€œThat’s why marker buoys are so critical. They are the most precise means we have to mark a sweet spot.   And trust me if I find one boulder that’s half the size of my Tundra’s hood in the middle of Clear Lake, California â€“ I want to know exactly where to find it when we go back there five years later.â€

If you want to be more like â€œIkeâ€ and you tow your boat to tournaments with a 2007 or newer Toyota Truck, be sure to sign up for the Toyota Trucks Bonus Bucks program by calling Kendell at (918) 742-6424. She’s always happy to help and it’s a great way to add cash to your tournament pot.