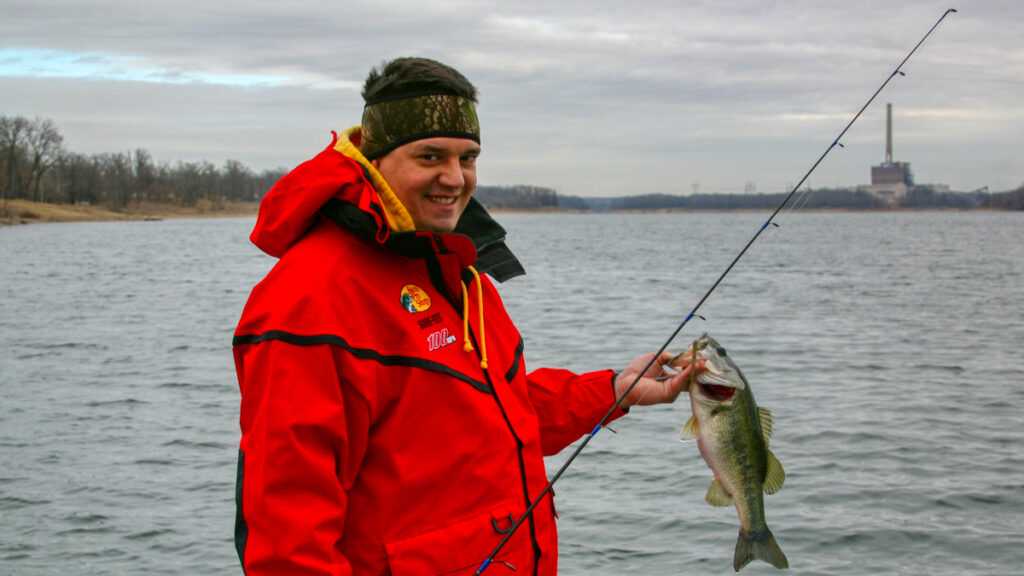 Warm water discharges. Power-plant lakes. Hot ponds. Whatever you term these fisheries, finding a lake that has warmer than average water in the late winter and early spring can produce some of the best bass fishing all season. There is no mistaking it, bass on those hot ponds live a different life than bass in your average fishery with water temperatures often mimicking cold winter air temps.

These lakes that feature water that has passed through a cooling system for a power plant add warmer than average water back to the lake. Now this may not sound appealing in August in the blazing heat of summer, but January, February and March offer prime-time hot-pond bass fishing.

Obviously as is the case with anything in bass fishing, it’s not enough to simply know where a hot pond is and start chucking and winding all around it. There is more of a method to the madness than most realize. It’s not just throw it up as close to where the water is coming out, in fact that can be some of the least productive water at times. But there are several nuances to fishing warm water discharges to make your approach to bass fishing more effective here.

Obvious factors like size of the fishery, current, consistency of water discharge, available cover, available forage and more can help you predict where the bass are staging, feeding and migrating throughout the fishery. We can provide several scenarios and examples that will help illustrate these points better. 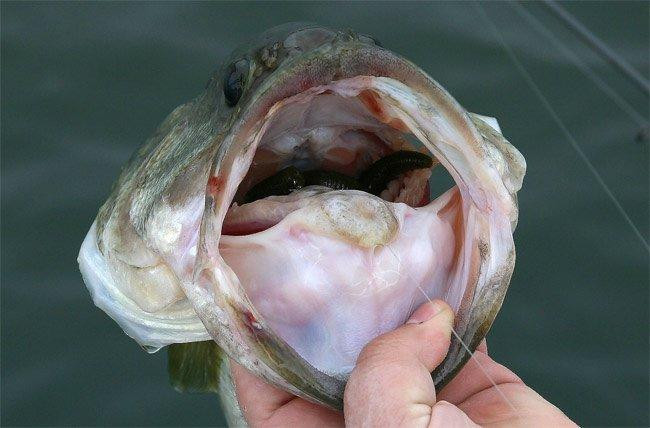 Todd Hammill and Scott Glorvigen frequent a hot pond in Minnesota. The pond itself is just off the Mississippi River and is only around 11 acres in size. The hot water discharge area on this bay off the river is lined with reeds, cattails and other vegetation. Of course in the winter months, the vegetation is dead or dormant but offers great canopies for the bass to tuck under out of the current and still take advantage of the warmer water.

The area produced one of their largest bass of 2011 weighing more than 6-pounds.What they found is that because of fishing pressure, as it can be some of the only open water in Northern Minnesota, they’ve had to really delve into the cover itself and fish those bass out of thick cover. Often there are fish caught on current edges as well. But day in and day out, they like to nose up into the cover.

Conversely I spent many years fishing a hot water lake in Northern Arkansas. What made this fishery unique is it’s one of the furthest north lakes that is stocked with Florida strain bass. Ever had to knock the ice out of your guides while sight fishing for cruising Florida-strain largemouths getting ready to go on the beds? I have. This lake was unique in that it was a bit larger and the lower ends of the lake near the dam actually could have pretty cold water in it while the upper ends of the lake could be balmy at 70 degrees.

The lake has quite a bit of standing timber, a few points and pockets and some rock. However we often found the best fishing to be in the mid-lake area. You could catch bass up at the discharge, but more often than not our best fishing was thinking a few months ahead of normal Arkansas fishing and concentrating on the warmer mid-lake temperatures that put the fish in a comfort zone to feed and think about the impending spawn.

To this day, my largest five-bass limit came fishing that power plant lake in early March. I found a school of very large bass suspending off a main lake corner. I could see them on the graph and tried for a while with various different baits. In the end, it turned out to be a weightless Senko, allowed to sink as deep as 18 feet that yielded all my big bass that day. A drop shot also caught a lot of fish, but those bigger fish just related better to the slow fall of the Senko.

It was finding that temperature zone within the lake that was concentrating the bass. The air temp was holding right around freezing, yet the water temp was between 60-65 degrees. The big bass on a hot-water fishery will often congregate in one section of the lake and that can be the biggest part of the puzzle is just sampling the different sections of the lake until you find that temperature range the bass are really relating to. 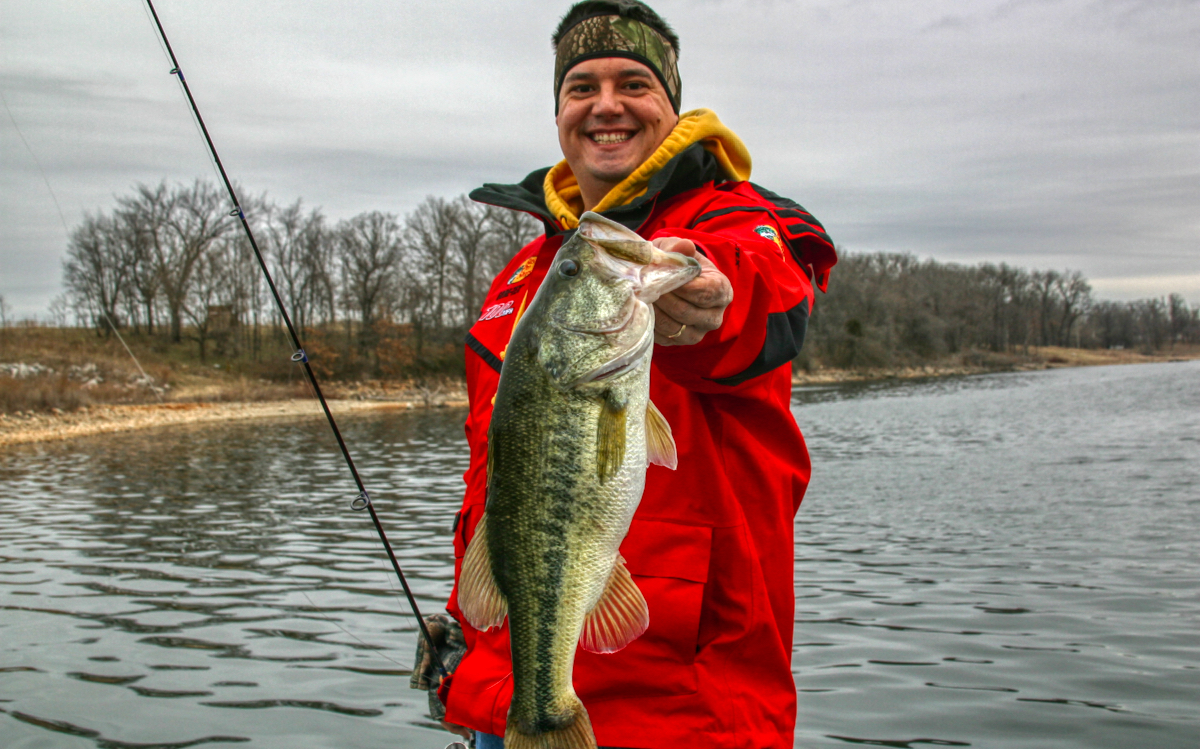 The consistency of water discharging from the cooling towers at the power plant fed fisheries can have a key role. I know at the hot lake in Arkansas, the power generation shut down for several weeks there and there was a huge fish kill. The bass were not accustomed to surviving in water temperatures below 40 degrees and the lack of generation stunned and ultimately killed a lot of them. That was more than 10 years ago now and the regularity of water generation has kept the bass fat and feeding. Power plants often have outages that will also mean there is no flow or warm water coming in so be prepared to adjust your tactics accordingly.

There are hot lakes like Newton Lake in Southern Illinois that offer size, and various structure and cover to fish. Terry Brown has found patterns you don’t often think would work in January and February on other fisheries, work on these hot water fisheries. Deep cranking might be a May or June pattern on your average lakes in the Midwest, but at Newton, it can be the deal in February. Flipping and pitching is often thought of as a good way to fish in the winter, but keep in mind the days start getting longer every day after the first of the year and if the water is already a comfortable temperature, the increasing activity levels, longer days can accelerate the fishing and effective patterns.

Don’t overlook that fact that fish can still have winter patterns on a hot lake. We’ve said how it can often fish like different times of the year. But a hot pond can also fish like other lakes. The further you migrate from the warm water source, the more those fish will fall into typical winter patterns. I’ve seen days where jerkbait fishing in the coldest water on the lake was better than jig or crankbait fishing in the warmest water.

I’ve also seen where being as close to the current and letting lures tumble down through and around the eddies of the strongest current coming into the lake from the power plant, have yielded some big catches. Current positions fish in predictable ambush points. It disorients baitfish. Knowing all of this should factor into fishing the discharges.

Lake Dardanelle, in Russellville, Ark., is also the home of Arkansas Nuclear One, a nuclear power plant with a cooling tower and warm water discharge. Before the days of 9/11 and homeland security, we would fish there as kids right up by the discharge gates, catching stripers and whatever else was in there feeding on disoriented shad. My father worked at ANO and would take me up there and fish on the weekends.

As I got old enough to go on my own, I learned the nuances of the current and caught many 20-pound limits working current seams and eddies with crankbaits, jerkbaits, spinnerbaits and other lures. Learning where the big rocks were that broke that current took time and cost me some baits, but it also made my fishing very efficient. I knew where those bass like to hide and how they would make mad dashes and rolls against the bank rip rap to snag a seemingly disoriented shad. Some days a lipless crankbait would wreck them. Some days a slightly weighted soft jerkbait did.

The thing to remember is to not just assume the bass are lined up in the warm water waiting for lures to fall from the sky. You still have to put in the time to learn current breaks, water temperature ranges, generation schedules, forage activity, fishing pressure, season of the fish and more. But learning these things can also make it a lot easier bass fishing than you experience on other highly pressured fisheries with much colder water.