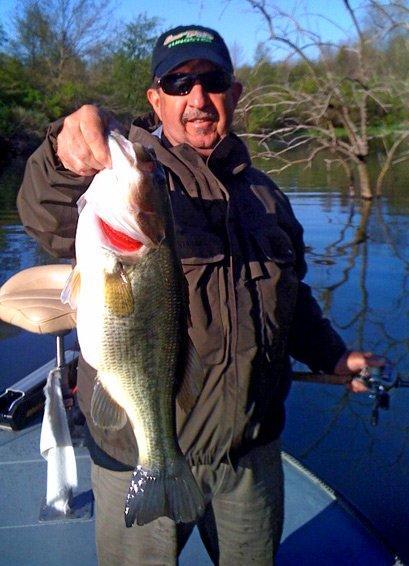 Post frontal conditions in cold water can be some of the toughest conditions encountered for anglers. Case in point was the latest Bassmaster Open on Lake Lewisville in Texas. Rising water conditions followed by a severe cold front made fishing nearly unbearable and a very tough bite became even tougher. After finishing in a tie on the final day Kansas pro Brent Chapman and Arizona angler Josh Bertrand had to hit the water in a sudden death head to head match-up where conditions had truly deteriated to winter-like conditions.

Water temps that started the week over 50 degrees had dropped to the 40’s by the time the fish-off started on Sunday morning. Chapman made the choice to go to a water discharge area with current and warmer water, he thought, and Bertrand went back to where he had weighed 18 pounds on day one of the event near the dam area. Bertrand had struggled on days two and three as a result of his area being hit with cold heavy wind but Sunday he was able to fish that area.

Chapman, upon entering the smallish area with the discharge, noticed right away water temps had dropped significantly to just above 40 degrees and the current had diminished. Rather that running to a new location he decided to fish the area one time. He remembered one of his co-anglers had caught his fish on a wacky rig so he tied it on and went to work. While Bertrand was struggling for a bite, Chapman nailed a sluggish 6 pound 5 ounce largemouth that initially he felt was a drum or a catfish. He landed that giant and it was over and he had won the Open but had also qualified for the 2013 Bassmaster Classic in the process.

Cold front conditions in cold muddy water can be a some of the toughest conditions an angler can encounter and unusual tactics can pay dividends, much like Chapman encountered swtiching up to the wacky rig.

This past spring I fished an opener in early April  in similar condtions. Rain, snow and wind on a lake where water temps were only in the upper 40’s can be super tough in the central part of the country.  Hard to believe maybe, but nearly half the field quit early without a fish. Temperatures dropped from 44 degrees to the lower 30s in a matter of hours and truthfully it was pretty durn unbearable. Being a grinder I knew that these severe conditions were going to lock down the bite but if we had a chance at all it would be on a small in-line Eco Pro spinner and a small flipping tube. I switched between the two baits and ended up with 4 bass weighing 12.92 pounds and won the event. Second place was 2 fish weighing 9.77 pounds and most of the field blanked.

The Eco Pro Spinner gave me a distinct advantage from a couple of angles. One, the fish had not seen in-lines on this lake before and second, Eco Pro had just released this new one a week or so before and I had a few of the early models. The vibration of this shaft through the blade model, combined with the denseness of tungsten creates a heavy vibration. They can be cast easily even in the wind and I truly believe the fish I caught reacted to the bait vibration versus looking at it as an easy meal. Since they had just hit the market I knew that no one would have one nor would they think about throwing them in these conditions.

The Eco Pro Spinner comes in 19 colors and 3 different weights, 1/16, 1/8 and 1/6. They incorporate pure tungsten into the body and I chose black nickel as the color choice. Dark water always means dark baits to me and the profile looked just like a small shad in the water. I usually use a small swivel on these baits as they can cause line twist but tied the bait directly to the line this day.

The next time you encounter a major cold front with water temperatures between 35 and 50 don’t be afraid to jump out of the box a bit and try a in-line spinner.

The Eco Pro Spinners are available online at Bass Pro Shops and retail for $4.49.