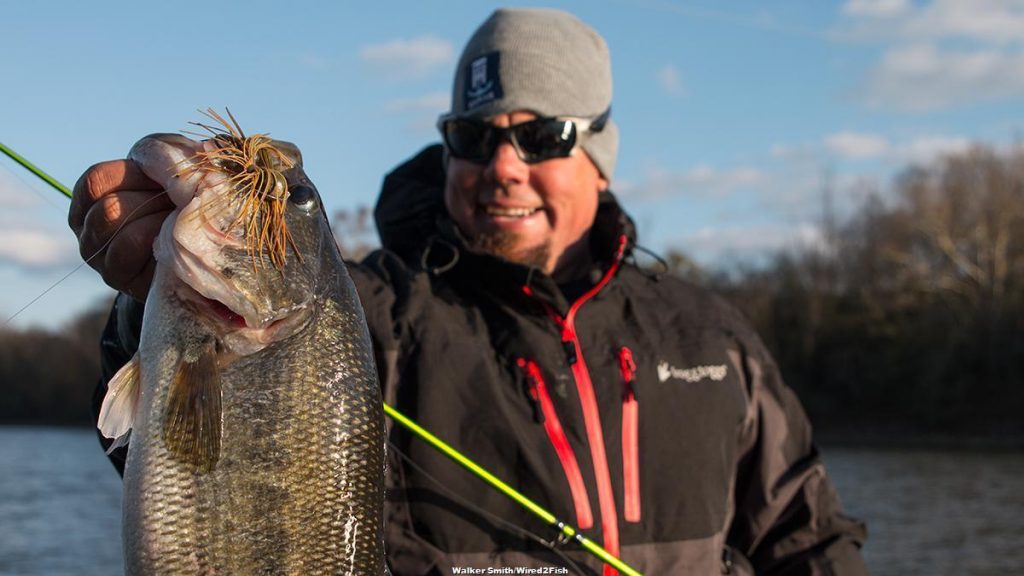 As the water temperatures continue to plummet and the bass become increasingly lethargic, it’s tempting to break out our oft-forgotten ultra-light fishing line, small baits and dainty spinning gear. We’ve all been there before— we’ll try anything imaginable to conquer the dreaded coldwater blues.

But Elite Series pro Chris Lane refuses to abide by conventional wisdom and let frigid temperatures throw him for a loop. He believes this is one of the best times of the year to catch big bass with skirted jigs and stout casting gear.

According to the 2012 Bassmaster Classic champion, it’s essential to understand these coldwater variables:

It’s all about the crawfish

We’re nearing the end of another fall season and our brains have been muddled by constant talk of the shad migration. There’s no doubt this annual phenomenon plays an integral role in autumn bass fishing, but now is the time when the bass’ attention turns elsewhere and for good reason.

“When the weather turns cold this time of the year, shad become less appealing to big bass,” Lane said. “That’s not to say they’re no longer a viable foodsource—because they are—but the bass are beginning to target meals that require very little energy exertion to consume. They know winter is on its way, so they’re becoming progressively mindful of their slowing metabolic levels.”

His theory makes plenty of sense, especially when you draw a brief parallel to human behavior. If you’re cuddled up on the couch on a cold, dreary day, you’d probably rather make a big pot of chili in the warm confines of your kitchen instead of driving into town to grab a burger. Our slimy green friends feel the same way.

“If a bass wants to eat a shad, or any type of baitfish, it’s going to have to chase it around before it chows down,” Lane said. “And what does it get for all of that work? One little shad. On the contrary, crawfish are very easy for them to catch and represent substantial nutritional value.” 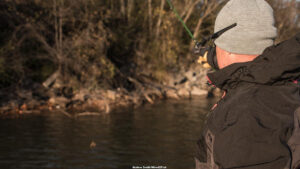 It’s important to understand that “warm” is a very relative term depending upon your geographic location. But even a slight, few days-long increase in temperature can have big implications for your jig fishing success. The reason is due to a single primary factor.

“Like the majority of gamefish, crawfish also move towards deeper water as the temperatures drop,” Lane said. “They love to hang out around rocks, which also happen to be excellent heat conductors. This emittance of heat is hugely important because it makes both the crawfish and bass much more active.”

To gain a better understanding of this concept, let’s approximate this occurrence to human behavior again. If we’re upstairs in the freezing-cold bonus room watching a football game and the same game is on downstairs next to a roaring fireplace, it’d be tempting to relocate. Now, add a buffet of your favorite snacks to the equation and—yep, you guessed it—you’ll be jumping stairs and stiff-arming family members to fill your belly and get warm.

For this very reason, you’ll often experience your best jig fishing days on the second or third day of a warming trend. The rocks heat up, the crawfish come out of the holes and the bass just sit by, enjoy the warmth and stuff their guts.

Remember: Coldwater bass are renowned for their languid behavior, so Lane urges the importance of a slow, methodical retrieve. If you still can’t get bit, he suggests lightly popping the slack in your line to create a subtle hopping motion with your jig.

Be willing to sacrifice

Few things worth having in life come without sacrifice. Unfortunately for bass anglers, the sames goes for jig fishing in cold water. Before you head to your favorite lake or pond to try this technique, make an effort to adopt a realistic mindset. You probably won’t have the dozens of bites possible with finesse presentations, but the ones you get will be worth it.

“If you’re someone who likes to catch quantity, it can be difficult to make yourself throw a jig all day,” Lane said. “I prefer to target bigger fish whenever I can and heck, it’s even hard for me sometimes. But I’m telling you— it’s worth the sacrifice. The bigger, smarter bass are stuffing themselves because they know the importance of surviving the winter and being ready to spawn at the first hint of spring.”

Some of the biggest bass of the entire year are caught in cold water, so remember to remind yourself of that before you hit the lake. By keeping a positive mental attitude and staying patient, Lane believes your chances of catching “the one” will skyrocket. 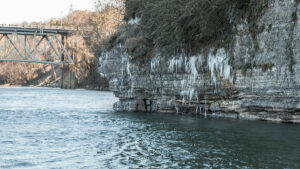 As is the case with most bass fishing techniques, a large part of your success lies in your ability to eliminate dead water and recognize high-percentage areas. Throughout Lane’s very successful career, he has determined three likely hotspots for coldwater jig fishing action.

Don’t go too light: You’ll be fishing around a lot of jagged rocks, so don’t go too light with your line selection. Lane uses 15-pound Stren Fluorocarbon whenever he’s coldwater jig fishing. 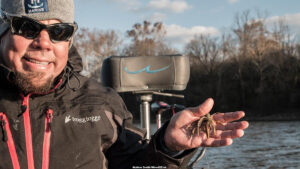 Shopping for jigs can be overwhelming, to say the least. You’ll see head shapes that look like spaceships, colors that more closely resemble clown wigs and hooks seemingly made of tinfoil. But there’s good news— this technique doesn’t have to be complicated. Lane keeps his system astoundingly simple and it pays big dividends.

Realism is his primary focus when selecting a suitable coldwater jig color. He aims to keep his 1/2-ounce Luck-E-Strike Live Motion Jig as natural-looking as possible and doesn’t often deviate from three specific colors.

When Old Man Winter starts to rear his ugly head this year, don’t let it scare you away from what you love. Bundle up, get out there and bring along your 1/2-ounce. Sure, it’s cold— but there are few things that will warm you up faster than a great big bass on the end of your line.